This simple no-bake pudding pie comes together in no time. The hardest part about making it is waiting a couple of hours for it to firm up. While it is always delicious, it is especially welcome during warm weather and makes a great dessert to serve after enjoying barbecue, burgers, etc.

For this sweet, cool dessert, you need the following ingredients:

You start by beating half-and-half and the pudding mix in a mixing bowl. I recommend that you start off slowly for about 30 seconds and then increase the speed to HIGH for about 2 minutes.

Next, add 8 ounces of Cool Whip. For this recipe, you can either buy two 8-ounce containers or save some plastic (and maybe some money) and buy one 16-ounce container. If you purchase the larger container, simply use half.

Beat at a LOW speed until you no longer see any white from the Cool Whip.

Add some fresh lemon zest for an added layer of brightness. Once you have grated the lemon zest, fold it into the filling.

Pour the filling into a prepared pie crust. You can either make your own graham cracker crust or buy a 6-ounce crust. Alternatively, you could even bake a regular pie-crust, but then technically this would no longer be a no-bake pie. Minor details – no need to worry about them.

Next, spread Cool Whip on top of the lemon filling. If your Cool Whip is too firm because it has not thawed out enough, go ahead and freeze the lemon pie for an hour and allow the Cool Whip to thaw some more in the refrigerator.

If your Cool Whip is nice and soft, you can go ahead and spread it on top of the lemon pie filling. Freeze the pie for 2-3 hours so that it will become firm.

When ready to serve, if the pie is too firm, let it sit out at room temperature for 15 minutes before slicing. 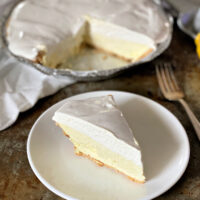 What is an icebox pie?

Years before modern refrigeration, people would purchase large chunks of ice and place them in special boxes that were insulated and would hold a block of ice up to 50 pounds. Hence the name, icebox. Believe it or not, there are still people around who refer to their refrigerator as an icebox.

While some icebox pies use eggs and condensed milk, this recipe makes use of convenience items and eliminates the need to be baked. Because it is made with pudding and Cool Whip, keeping the pie frozen is a necessity.

Other sweet pie recipes at Southern Kissed you may enjoy: