If you’re looking for an easy dessert, then these Mini S’mores Pies are perfect for you. You can whip them up in just 4 steps so they are as easy as pie to make! They taste like s’mores but without the campfire. Top each one with toasted mini marshmallows and a miniature Hershey’s bar for an extra sweet treat. Yum!

Rather than making the traditional s’mores which require a campfire and ooey gooey marshmallows, I decided to create Mini S’Mores Pies. Each adorable chocolate pie is a lot neater way of enjoying the great taste of a s’more in one tidy little pie.

For these cute little pies, you need the following ingredients:

🔪How To Make Mini S’Mores Pies

To make them, prepare a small box of chocolate pudding using 2 cups of half-and-half in place of milk. Place the rich chocolate pudding mixture in the refrigerator to help it firm up (twenty to thirty minutes should do the trick).

Once the pudding is ready, spoon the chocolate mixture into six Keebler mini graham cracker crusts. Top each pie with miniature marshmallows.

Place all of the pies on a cookie sheet and place in the oven and set it to BROIL. Keep a close eye on the pies to make sure that they don’t burn.

Remove the pies from the oven and place a small milk chocolate candy bar, broken in half, on top. If the chocolate does not melt, place them back in the oven for just a moment longer until the candy bar is soft and slightly melted.

It’s because it tastes to good you will want s(ome) more.
S’more is a contraction of Some + More and originally appeared in a cookbook dating back to the 1920’s.

Easy Peanut Butter Pie – This easy peasy pie is made with creamy butter and vanilla pudding. Use a pre-made chocolate cookie crust to create a sweet spin on the classic Reese’s cup.

Key Lime Pie – Enjoy a slice of paradise when you create Lucy Buffett’s Key Lime Pie with Grand Marnier® Whipped Cream at home. One bite and you’ll be hooked. 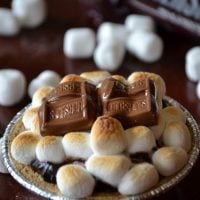 Be sure to come back and tell us how your mini s’mores pies turned out!