This recipe for creamy no-bake Coconut Pie makes a dessert that is company-worthy. It’s cool and creamy and topped with toasted coconut. If you like coconut and cream pies, then you’re going to like this easy-to-make coconut pie recipe.

This coconut pie is a great pie for sharing with friends and family at the end of a great meal. The recipe is much easier than it seems – basically, you mix the pie filling, put it in a pie shell, top it with shredded coconut, and chill. Simple, right?

This recipe comes from a woman named Patricia who lives near the Big Easy. After hearing from family members rave about the pie, I had to get the recipe.

Lucky for all of us, she was kind enough to share it.

For this luscious coconut dessert, you need the following:

🔪How To Make No Bake Coconut Cream Pie

Chill 2 ½ cups of milk in the freezer for about 10 minutes so that it will be very cold. At the same time, place your mixing bowl in the freezer to chill, too.

Toast ½ cup shredded coconut on your stovetop in a non-stick skillet. Let it cool while you make the filling.

Using the whisk attachment of your mixer, beat 2 envelopes Dream Whip with 1 cup of very cold milk and 1 teaspoon of coconut extract in the chilled bowl of an electric mixer until soft peaks form. Start SLOW and then increase the speed to HIGH. Use a rubber spatula to scrape the sides of the bowl to be sure to get it all mixed well.

Fold in the 1 cup of shredded coconut by hand.

Spoon the creamy coconut filling into the pie crust of your choice.

Top with toasted coconut and chill for 2 hours.

For this recipe, you will need to toast a little bit of coconut for the topping. While Patricia’s recipe calls for toasting it on top of the stove, you can alternatively spread the coconut on a cooking sheet and bake at 350 degrees for about 10 minutes or opt to BROIL it. Regardless of the method you choose, be sure to keep an eye on it so that it doesn’t burn. Once the coconut has become golden brown, remove it from the heat source and let it cool.

If you have a favorite homemade pie crust, feel free to use that in place of the prepared graham cracker crust. If your pie shell is a baked shell, blind bake it first and let it cool completely before using.

I use 2% milk, but regular whole milk works just as well.

What does it mean to blind bake a pie crust?

Blind baking means that you bake a pie crust without the filling. It is simply baking a plain pie shell. However, to keep the pie crust from bubbling up and having air pockets, it’s best to use pie weights like dry beans or rice.

What is the best way to store coconut cream pie?

Store the pie in the refrigerator. Once the pie has been cut, loosely cover it with plastic wrap. Consume within 3-4 days.

Thanks, Patricia, for sharing your delicious recipe with us! 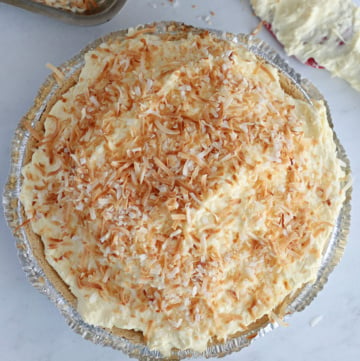 Nutrition information is a very rough estimate and should not be used in dietary planning.

Be sure to come back and tell us how your coconut pie turned out!