Five ingredients are all it takes to make a clone of the famous Paula Deen’s Ooey Gooey Butter Cake that you will find at Paula Deen’s Family Kitchen. Two delicious layers combine to make one fantastic dessert! The bottom layer is a delicious buttery yellow cake, while the top layer is a rich mixture of cream cheese, sugar, and egg.

When I dined at Paula Deen’s Family Kitchen in Pigeon Forge, I tried the Queen of Southern Cooking’s Ooey Gooey Butter Cake.  You might know it by some of its other names, such as Chess Cake, Chess Squares, or Cream Cheese Squares.

Before leaving the store, I purchased a box of the mix so that I could make a batch at home and see how it compared to the Cream Cheese Squares that my husband has been making for years.

The box indicates that it is 20 ounces, but I wanted to know how much each of the packets weighed so I placed them individually on my kitchen scale.  The Gooey Filling Mix weighed 8 ounces and the Ooey Cake Mix was 12 ounces.

I made them following the directions on the box and this is how they turned out:

They look pretty good, don’t they?

The funny thing, though, is that they didn’t look like the Ooey Gooey Butter Cake that I had at the restaurant.  (See the 2nd picture above in this post.)

To me, the restaurant’s version was nearly identical to the recipe for Cream Cheese Squares.  To prove my point, I made a batch – see below.

I went one step further and decided to conduct a little taste test among friends.  Granted, they did not dine with us at Paula Deen’s Family Kitchen and had not tried either recipe before the taste test.

While they enjoyed both, the winner of the taste test ended up being the boxed mix of Paula Deen’s Ooey Gooey Butter Cake.  I admit to being a little disappointed, hoping that the Cream Cheese Square would be the winner.

I decided to figure out how to recreate the box mix version.   Since I knew the weight of the ingredients in the box of Paula’s cake mix, I felt confident that it would be easy to make using a regular cake mix that one could pick up at most grocery stores.

Being a “butter cake,” I purchased a box of Duncan Hines Butter Golden cake mix.  Since there were more than 12 ounces in the mix, I used my kitchen scale to figure out the unsifted volume to use.  It came out to approximately 2.25 cups of cake mix.

The amount of powdered sugar in the original was 8 ounces.  The weighted, unsifted volume on my scale came out to approximately 1 3/4 cups.  I followed the directions on the box of Paula’s mix using Duncan Hines mix and they turned out very much like Paula Deen’s Ooey Gooey Butter Cake (from the box, not the restaurant).

While the clone version of the box of Ooey Gooey Butter Cake is good, I think the recipe for cream cheese squares is a near-perfect match of the same dessert served in Paula Deen’s restaurants.

For this cream cheese cake recipe that tastes like Paula Deen’s Ooey Gooey Buttercake, you need the following ingredients:

To make it, start by preheating your oven to 350 degrees Fahrenheit. Lightly spray a 9×13 baking dish with non-stick spray.

Place the cake mix, 1 egg, and the butter into bowl of mixer and beat for 1 minute until it becomes a soft dough.  Spread the mixture evenly over bottom baking dish.

Combine the remaining eggs, cream cheese, and powder sugar in mixer bowl and beat until smooth. Spread the cream cheese mixture over cake batter and bake for 35-40 minutes until golden brown.

Allow to cool completely before cutting. 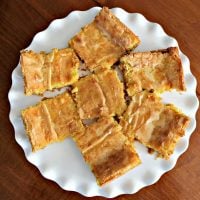 If the batter is too stiff to spread with a spatula, lightly moisten your hands and spread the dough until the bottom of the pan is covered.

Warning:  These treats are loaded with sugar and are highly addictive.

Other delicious desserts you will want to sink your teeth into: