The tangy goodness of mayonnaise combined with apple cider vinegar and spices enhances everything that Alabama White Sauce is put on from chicken to seafood to turkey and everything in between.

The best way to make your own white bbq sauce is by following this easy recipe. It’s similar in flavor and consistency with Big Bob Gibson’s Original White Sauce, which everyone agrees on as being one of the top choices for barbecuing enthusiasts everywhere!

It’s hard to pin down the first time that white bbq sauce was served, but it is known that ever since Bob Gibson opened his BBQ restaurant in 1925, it has been on the menu.

Today, many have heard of Big Bob Gibson’s Bar-B-Q, which is located in Northern Alabama, because of the awards that Pitmaster, Chef, and part-owner Chris Lilly has amassed for his delicious smoked chicken and barbecue.

If you are in Alabama or the southeast, you can easily pick up a bottle at your local grocery store. If not, then use this recipe to make your own homemade barbecue sauce. It’s a versatile condiment that is low-carb and tangy.

This BBQ staple is made with simple ingredients – it has a mayonnaise base, black pepper, horseradish, spices, and the addition of vinegar, making it a tangy sauce perfect for chicken breasts, pork chops, pork tenderloin, pulled pork, chicken wings, chicken thighs, bbq chicken, grilled fish, fried fish, hard-boiled eggs, and just about any piece of meat that you’d like.

Some people even use it as a dipping sauce for things like chicken nuggets and French fries.

We all probably have all of the ingredients already in our pantry and it comes together in no time. The hardest part about making it is waiting a few hours for the flavors to meld before using it.

To make your own creamy version of Alabama’s favorite white barbecue sauce, you need the following ingredients:

Combine all of the ingredients in a bowl, cover, and chill before serving. You can add additional apple cider vinegar for a thinner sauce with a bit more bite.

How easy is that?! 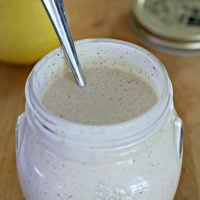 My family and I like to use it on top of grilled chicken, though one family member loves it so much that she has been known to put Alabama White Sauce on hard-boiled eggs. It’s that good.

Throughout the book, Kent includes tips and tidbits about grilling and barbecuing. The book is divided into the following chapters:

Though not mentioned in the chapter headings, there are also recipes for side dishes, desserts, sauces, rubs, and marinades, making the cookbook an invaluable resource when it comes to grilling.

Go ahead and make this Alabama White Barbecue Sauce. You will see why so many people in Alabama and around the South love it. Look for it at your favorite bookstore or at Amazon.com.

Before you go, don’t miss out on these Southern Kissed favorite recipes:

Don’t forget to come back and tell us how your Alabama White Sauce turned out!