Move over, tater tots! This easy recipe for keto Zucchini Tots makes a great low-carb snack or side dish. These tots are a delicious way to eat your veggies.

These tasty zucchini tots are similar to zucchini fritters, but they are not fried. They are pretty easy to make and are healthier than their fried counterpart – classic tater tots. They are baked in a mini muffin pan and have only 4 grams of carbs in 4 tots.

How To Make Keto Zucchini Tots

For this homemade zucchini tots recipe, you need the following ingredients:

Before you get started, preheat your oven to 400 degrees. Spray a 24-cup mini muffin tin with cooking spray and set it aside.

Next, place the shredded zucchini in a medium bowl (I prefer to use a large mixing bowl) and toss with the salt. Let sit for 10 to 15 minutes. Use a tea towel, clean dish towel, or paper towel to squeeze out as much water as you can and discard the liquid. (This is a very important step. Do not skip it.)

Sprinkle the coconut flour onto the grated zucchini and toss well to coat. Add the eggs, cheddar cheese, onion, and paprika, and mix well to combine.

Fill each muffin cup with 1 ½ tablespoons of the zucchini mixture. Bake for 15 minutes in the preheated oven, or until golden brown.

Run a knife around the tots to loosen as soon as you get them out of the oven. Let cool for a minute to allow them to set up, then remove them from the muffin pan.

If you have a small cookie scoop, check the size. Some small scoops are 1.5 tablespoons making the perfect gadget for filling mini muffin cups.

Zucchini is considered a non-starchy vegetable and a medium-size zucchini has only 33 calories. Zucchini is rich in Vitamin B6 and zeaxanthin and several other compounds that can play a role in preventing oxidative stress. 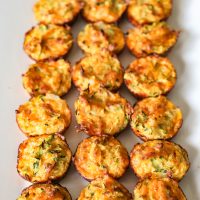 Recipe from The Ketogenic Cookbook, copyright 2015. Reprinted with permission from the author.

How do you grate zucchini?

You can easily grate zucchini using a cheese grater (box grater) or a food processor.

How do you store zucchini tots?

Store any leftover tots in an airtight container in the refrigerator for up to 5 days.

In The Ketogenic Cookbook

, written by Jimmy Moore and Maria Emmerich, readers are introduced to the ketogenic diet – a low carb, moderate protein, and high-fat diet. (It’s commonly referred to as a keto diet.)

While this may seem counter-intuitive to what modern-day science is trying to tell us, many are finding success in losing weight and becoming healthier by following a ketogenic diet. By consuming little to no carbs, the body goes into a state of ketosis – it burns its own fat as a primary source of fuel.

In the book, we learn what prompted the two to collaborate on the book, the history of the ketogenic diet, why it can heal the body, the nutrition behind the diet, and the correlation between a keto diet and a Paleo diet.

There are sections on cooking keto and specialty ingredients (many of which you can find at stores such as Whole Foods, Sprouts, and Earth Fare). Along the way, we read of testimonials of how the two have helped others through sharing the keto/low-carb diet.

I tried the diet for a couple of weeks. During that time, my stomach felt pretty good – no bloating or indigestion and my elimination patterns became more regular. I think that there can be a lot of positive things to be said about this diet.

On the negative side, it can be difficult to follow if you are the only one in your household doing so.

I like the book and think that it is a good primer for the ketogenic diet. Plus, there are a lot of recipes good for those on the diet and even those who are not.

The recipe for zucchini tots has been my favorite so far. The tots are baked in a mini-muffin pan. (I was unable to find my pan, so I used the next best thing – a doughnut hole pan.)

Recipes In the Book

The Ketogenic Cookbook includes a sample 7-Day Meal Plans and lists resources to help those who want to begin a keto diet.

According to Chris Kesser, a low carb diet is beneficial for the following conditions (but aren’t limited to):

In 2004, Jimmy Moore lost 180 pounds thanks to a radical (low carb) lifestyle change. Since that time, he went on to create a successful blog, Livin’ La Vida Low Carb.

Maria Emmerich suffered from irritable bowel syndrome and acid reflux. While searching for a solution, she recalled how her veterinarian inquired about her pet’s diet when her dog was losing her hair in patches.

Maria questioned why her physicians didn’t ask about her diet. After digging deeper, she ended up cutting out most carbs and all grains and saw an immediate improvement in her health. She has gone on to publish books

and has taken on clients as a nutritionist. Maria’s blog is Maria Mind Body Health.

Hungry for more but don’t like to cook? Check out my blog post on how to make a keto version of Red Lobster’s Cheddar Bay Biscuits.

Thanks to an astute reader, the nutrition information for these tasty tots has been updated. Since I originally posted this recipe, I have changed recipe plug-ins which also means that the way the nutrition is calculated is different. I also noticed that I had it listed as 24 servings because there are 24 tots. I should have entered 6 servings since each serving is 4 tots. Below are some screenshots of the recipe plug-in and its calculations.