Of course, you could eat it on the 3rd of June, the 8th of July, or even on October 12th. We really don’t need an occasion to enjoy this slightly spicy pie filled with the great tastes of chocolate and coffee ice cream.

The recipe that follows is from Scooped, a delicious dessert cookbook from the same folks that produce Southern Living magazine. Though it is totally delicious the way the recipe is written, feel free to customize the recipe for your own likes and tastes (like I did!).

For this sweet, creamy, cool dessert, you need the following ingredients:

To make it, you start by making the Spicy Cinnamon Graham Cracker Pie Crust. Preheat your oven to 350 degrees Fahrenheit.

Bake for 10 to 12 minutes or until lightly browned. Cool completely on a wire rack (about 30 minutes).

[The second time that I made this recipe, I used a store-bought chocolate cookie crust. If you don’t like spicy foods or want to serve the pie to kids, this is the way to go. Alternatively, you could sprinkle a little red pepper on the bottom of the pie crust to give it a little “kick.”]

Next, stir together semisweet chocolate, pecan pieces, and ½ cup cinnamon graham cracker crumbs. (Reserve ½ cup chocolate-pecan mixture to top the pie.)   This will be used for the layer of crunch.

Once the crust has been baked and cooled, it’s time to start layering the delicious layers. Start with the first layer – a pint of softened chocolate ice cream.

For best results, make sure that the ice cream is soft. Plan on leaving the ice cream out on the counter for at least 30 minutes. I recommend that you place the carton of ice cream in a bowl or shallow dish and set your timer. If you forget, you could end up with a runny mess.

Now is the time to add the layer of crunch. Sprinkle it evenly around the top of the chocolate ice cream and freeze for 30 minutes.

Now it’s time for another layer of (coffee) ice cream. Layer the coffee layer on top of the crunchy goodness.

Freeze the pie for about 8 hours so that it becomes nice and firm. If you just cannot wait that long, I completely understand. At least give it at least 2 hours of freezer time.

I used a small 50 mL bottle of Patron XO Cafe Coffee Liqueur. The whipped topping had a strong alcoholic taste. Being that the liqueur was not baked, the alcohol retained its properties. I recommend the spiked topping only if you plan on serving it to adults. For a kid friendly-version, use half to one teaspoon of vanilla extract instead.

Now a final dusting of those crunchy bits is sprinkled on top. (The pie needs to be frozen for another hour at this point.)

After the pie has been in the freezer for an hour, remove it and allow it to sit for 10-15 minutes before cutting and enjoying. 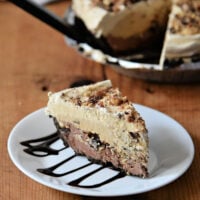 ***Recipe reprinted with permission from Scooped: Ice Cream Treats, Cheats, and Frozen Eats. For a kid-friendly version of this pie, omit the red pepper in the crust and substitute a teaspoon of vanilla for the coffee liqueur in the whipped topping. For a no-bake version, use a premade cookie or graham cracker crust.

Scooped is a soft-covered book consisting of 255 pages filled with recipes for all kinds of ice cream creations. It is loaded with colorful pictures that are sure to make your mouth water and have you screaming for ice cream.

The chapters are broken down as follows:

I love this cookbook. I am looking forward to enjoying many of the recipes with my family. Be on the lookout because I will soon be sharing the following recipes from the book:

*Photos from Scooped, used with permission.