Southern Pecan Pralines, a New Orleans signature candy, are sweet and crunchy and are great for sharing. With this recipe, you can make a batch at home and enjoy a taste of the Big Easy.

What Are Pecan Pralines?

Pecan pralines are a Southern confectionary delight made by caramelizing sugars together and adding pecans. Once the candy has cooked and cooled, it becomes a treat that is reminiscent of caramel fudge.

Pecan Pralines should not be confused with Praline Pecans. The latter are pecans that have been individually coated in a sweet mixture and are enjoyed as candied nuts. Pecan Pralines are candy with nuts.

For this classic Southern candy, you need the following ingredients:

🔪 How To Make Pecan Pralines

In a heavy-bottom saucepan, add the sugars, buttermilk, corn syrup, baking soda, and salt. Cook slowly over medium heat until the mixture reaches 235F on a candy thermometer.

Stir the mixture constantly with a wooden spoon while it cooks. The mixture will begin to rise as the temperature increases.

Keep stirring making sure to stir the edges so that the sauce doesn’t burn.

Remove the pan from the heat once it reaches 235 degrees and add the butter, vanilla, orange extract if using, and pecans.

Stir continuously for ten minutes until the mixture becomes thick. As the sauce cools, it will turn into a thick, silky caramel.

Drop by spoonfuls onto a parchment-lined baking sheet.

Although it will be tempting to pick one up and eat right away, be sure to allow them to cool completely. The pralines will be extremely hot and can burn you. Give them at least 30 minutes before you check them.

It could take up to 2 hours for them to harden. (If it is humid outside, it might seem like they will never firm up. But don’t worry – you’ve got this!)

Not reaching the 235-degree mark will cause this recipe to fail. In order to effectively make the caramel sauce, the sugar mixture needs to reach an optimal temperature.

Once the pot is removed from the heat and you are stirring for ten minutes, the air that is incorporated into the caramel sauce will cool the mixture and make it thicker.

You will probably not notice a change for the first five minutes but the reaction is happening. Keep stirring gently and a thick and silky caramel will develop.

As time goes by, the sugar in the pralines begins to re-crystallize and may start to appear grainy. While you could possibly eat them in that state, it won’t be the same. 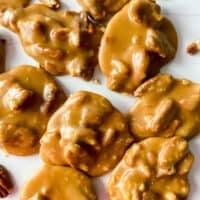 While pralines are a southern favorite, their history stems from the Old World back to the 1600s in France. Originally, Chef Clement Lassagne created the candy using almonds and called it a praslin in honor of French diplomat César Duc de Choiseul, Comte du Plessis-Praslin.

As often happens with languages, the original term praslin morphed into today’s praline.

Pralines very may have made it to the United States via French Ursuline nuns. The nuns taught young girls domesticated arts, such as cooking, of which candy making would be included.

In New Orleans, almond trees don’t grow well, unlike the native pecan. It was the culinary genius of African-American women that led to the use of pecans in the confections which are considered one of the earliest street foods in America.

Other Southern dishes that hit the spot: