French toast is a delicious breakfast treat that is perfect for any occasion. Slices of bread are soaked in a custard mixture and cooked to perfection. It’s an indulgent breakfast treat you will love. Plus, it’s super easy to make. Just a few simple ingredients and you’re good to go!

It only takes a few kitchen staples to make French toast, so it is easy to whip up on a whim. Let’s take a look at how to make this classic breakfast dish.

To make basic French toast, you need the following ingredients:

🔪 How To Make French Toast

Once you have all of your ingredients gathered, begin by making the custard base.

Whisk together eggs, milk (or half and half), vanilla, and spices until well combined.

Heat a skillet over medium to medium-high heat with a small layer of oil. If you have a non-stick skillet, use it. They work best when making French toast.

When the skillet is ready, dip the bread slices in the custard mixture. Allow the slices to soak it up, but do not leave them in long.

Remove them and allow the excess mixture to drip off. Place the slices onto the prepared pan or griddle and cook until they are golden brown.

Flip and repeat on the other side. Remove the slices once they are golden brown and place them on a paper towel to absorb any excess oil.

If you are a bread baker, be sure to wait a day or two after baking bread before using it to make French toast. I recommend that if you use a loaf of French bread, cut the slices ½” – 1″ thick.

When using brioche, be sure to cut your slices at least ½ inch thick. You need the thickness to be able to hold the custard mixture. Thinner slices typically do not hold up well when flipped.

Allow the bread to develop a nice, brown color before flipping. This may take a little bit of practice. There’s a slight learning curve, so just be patient.

Heat your pan to the optimal temperature. I find that heating it to medium-high heat works best. While making a large batch, I sometimes have to lower the temperature after cooking the first few slices.

Make sure your pan is well-greased/oiled/butter. Even though I use a nonstick skillet, I find oil helps to create just the right amount of crispness that French toast needs. You may find it necessary to add additional oil during the process.

Can you freeze French toast?

Absolutely. French toast freezes well for up to 2 months. To freeze, allow the toast to cool (I prefer to drain any excess oil on paper towels) and then place in a Ziplock freezer bag.

I recommend placing parchment paper between slices of French toast to help prevent them from sticking together. When you are ready to eat them, simply pop them in your toaster or toaster oven to reheat them.

Because there are eggs in the batter, French toast typically is not a vegan dish. However, if one substitutes ground chia seeds for eggs, it is possible to make a vegan French toast dish.

For a dessert option, a drizzle of chocolate sauce hits the sweet spot.

For a dessert option, a drizzle of chocolate sauce hits the sweet spot.

French toast can even be served topped with a scoop of ice cream, then drizzled with chocolate sauce, and topped with a cherry on top or a side of strawberries and cream. 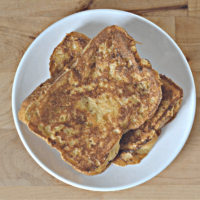 Making French Toast is easier than you think. Once you get the hang of it, you will be making it without a recipe.
4.67 from 3 votes
Print Pin Rate
Course: Breakfast
Cuisine: French
Prep Time: 5 minutes
Cook Time: 20 minutes
Total Time: 25 minutes
Servings: 6
Calories: 267kcal
Author: Lynda

Have you ever wondered about the origins of French toast?

History has it that the dish we know as French bread – or pain perdu if you are in France – has been around for centuries. In fact, the simple dish can be traced back to the Roman Empire.

The name of the dish has been traced back to 17th-century England. The French name of the dish translates to lost bread and is so named because of the peasants using stale bread that would otherwise be tossed out.

Be sure to come back and tell us how your French toast turned out!