Home » Recipes » How To Cook Ham

A slow cooker is the key to cooking a delicious ham. By using simple ingredients, you are guaranteed moist meat every time that will be perfect for sandwiches or dinners.

My mother-in-law made the best ham in her slow cooker, and hopefully one day I will be able to replicate it. Somehow she managed to get it so tender that it could practically be shredded with a fork. She knew exactly how long to cook her ham.

I have tried to make it like her in the past, only to overcook it time and time again. I am determined, though, to perfect it since I received a Set ‘n Forget® 6 Qt. Programmable Slow Cooker With Spoon/Lid. The Set ‘n Forget®  is not your grandma’s slow cooker – it is a sleek, modern-age technological wonder. I will tell you more about it in a moment, but first, let me share with you an easy way to cook a ham in the slow cooker.

Ham can dry out in the slow cooker. My mother-in-law would pour a can of Mountain Dew over her ham to keep it moist. To avoid extra additives (high fructose corn syrup, etc.),  I use 1 ¼ cups of water and ¼ cup of apple cider vinegar instead of the soda.

Once the meat hits that temperature, the Set ‘n Forget® automatically switches to the WARM setting.

While I haven’t reached the point of the ham shredding, I haven’t overcooked it either. Since ham should be cooked until it reaches at least 145 and no more than 160 degrees, I know that I can increase the temperature setting without overcooking it. I am going to experiment some more to find that perfect temperature – one day I will be able to cook ham like my mother-in-law.

With the temperature programmed to 145 – 150, ham comes out slice-able and delicious. It is great paired with green beans and macaroni & cheese.

🔪How To Cook Ham in a Slow Cooker 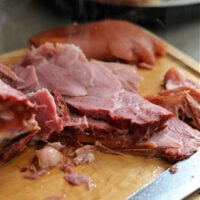 Look at the features of the Set ‘n Forget®:

With the Set ‘n Forget®,  I can spend less time in the kitchen and more time with my family. In addition to ham, we enjoy cooking roast and Seven Can Soup in our slow cooker.

Need some tasty side dishes to go with your ham? Carrots, macaroni and cheese, and broccoli are a few of my favorite sides to serve with ham.

Here are some other delicious slow cooker recipes: