Don’t let the idea of making cinnamon rolls from scratch scare you. They really are not that difficult. With a little patience and practice, you will get the hang of it and will be making homemade cinnamon rolls.

This recipe for cinnamon rolls uses a milk bread starter which is somewhat similar to a sponge. You may have heard of the starter by other names such as tangzhong.

For this recipe, you need the following ingredients:

Pour one-half cup of water into a small saucepan. Add in ⅓ cup flour and whisk.

Next, add in ½ cup milk and whisk until smooth with no lumps. Heat over medium heat until smooth and thickened like a slurry.

Remove the milk mixture from heat and cover with plastic wrap to cool. Press wrap against the mixture to prevent scum (a film) from forming.

Place ½ cup warm milk in a large mixing bowl. Add 1 teaspoon of sugar to the milk and stir. Sprinkle the yeast over the mixture and stir until dissolved. Allow the mixture to sit for approximately 15 minutes to allow the yeast to activate (bloom). The mixture will be bubbly when it is ready.

Once the yeast mixture is ready, add the starter to it along with the remainder of the sugar, egg, flour, salt, and softened butter. Mix by hand until combined.

Using a dough hook, knead the dough for about 5-minutes at a low speed in an electric mixer. Turn the speed to medium and knead for about five more minutes. The dough should come together and begin to form a ball.

Place dough ball in a greased bowl, turning once to grease top. Cover with plastic wrap and allow the dough to rise in a warm place until doubled (about 1-1½ hours). Roll the dough into a large rectangle.

Spread softened butter over the surface of the rectangle.

Combine cinnamon and sugar and sprinkle over the buttered dough.

Starting at one long end, roll up into a log, gently pulling backward during the process to help the roll to stay tight. Pinch the seam together to seal.

Using a sharp knife, cut the log into 2-inch slices and place in a greased 9×13 baking pan. (Some people like to use dental floss to get clean cuts instead of a knife.) Repeat the process with the second half of the dough. Let the rolls rise until doubled in a warm place (about 1 hour).

Heat ½ cup heavy whipping cream in the microwave on HIGH for 20 seconds. Stir the half and half and then spoon it over the top of the cinnamon rolls. It’s okay for it to seep into the nooks and crannies.

Place the unbaked cinnamon rolls in the oven and bake for about 30-35 minutes, until they are golden brown. Cool in pan for 5 – 10 minutes.

Let the cinnamon rolls cool for 20 minutes before icing.

Combine powdered sugar, sour cream, and vanilla extract in a medium bowl and mix until smooth.

This sweetened icing will have a bit of a “wang” or “twang” to it thanks to the sour cream. After the second bite, you will probably love it. If you don’t then feel free to use a different icing, like the cream cheese icing listed below in the recipe for making cinnamon rolls in a bread machine.

What is the best way to store cinnamon rolls?

My first thought is – in my belly. But really, once the warm rolls have cooled completely, place them in an airtight container and store at room temperature. They should last for 3-4 days, unless you have teenagers at home.

Can cinnamon rolls be frozen?

If you plan on freezing rolls, bake them as directed but do not ice them. Let the rolls cool completely, remove from the pan, and then wrap tightly in plastic wrap. Place in an airtight container and freeze for up to 6 weeks.

To reheat, allow the rolls to thaw in the refrigerator over night. Reheat the rolls in the microwave on HIGH in 30-second increments until desired temperature or in the oven at 350 degrees for 10 minutes. Top with icing. 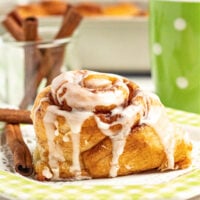 If you have a bread machine, it’s even easier to make cinnamon rolls. Here’s a quick look at how to make them using the DOUGH cycle.

Remove the dough from the bread machine and divide the dough in half. Roll each half into a rectangle approximately 16 x 8 inches. Spread each half with 2 tablespoons melted butter and sprinkle generously with cinnamon sugar.

Roll each half and cut into 12 pieces. (I cut it in half, then each half in half, and then those into thirds.)

Allow them to rise for 45 minutes.

Turn oven to 350 degrees and bake for 15 to 18 minutes, or until golden brown. Remove from oven and allow to cool.

For the icing, combine ingredients and whisk well. Spread or drizzle over cinnamon rolls.

Adapted from My Adventures in the Country’s Delicious Country Rolls.