If you’re looking for an easy recipe that will make all of your friends happy, then look no further than pull-apart cinnamon bread! This delicious dessert bread is sure to be a hit at any party or gathering and it’s perfect for sharing. All you need is some frozen bread dough, some butter and cinnamon sugar mixture, and a little time.

I have partnered with Rhodes to create  Easy Pull-Apart Cinnamon Bread – a delicious treat that you can make at home even if you don’t know how to knead dough! It starts with two loaves of Rhodes White Bread and a few ingredients that you probably already have at home.

For this super simple cinnamon bread recipe, you need the following ingredients:

🔪HOW TO MAKE PULL-APART CINNAMON LOAVES

Begin by thawing the two loaves of Rhode’s Yeast Bread in the refrigerator overnight.

In the morning when you are ready to make the bread, start by combining butter and powdered sugar. Add honey and vanilla and mix until smooth. Set aside. This is the butter mixture.

In a separate bowl, combine cinnamon and sugar and set it aside.

Place the thawed loaves of bread on a lightly floured cutting board and divide the dough. For each loaf, mark the middle, then on each side of that mark the middles again – effectively making four sections.

Then with each of those sections, mark in halves. At this point, you should now have 8 sections, but what you really want is sixteen slices. For example, for each of the sections you see below, I cut two slices. (It may seem confusing at first, but it gets much simpler.)

Next, spread the butter mixture on top of each slice and then top with cinnamon sugar.

Put the reassembled loaves into two loaf pans that have been lightly sprayed with nonstick spray. (I typically have some cinnamon sugar mixture left over, so I sprinkle it on top of the loaves.)

Next, place them in a warm place to let them rise until they have just about doubled in size. (My tip: heat your oven to about 150 degrees Fahrenheit and then turn it OFF. This creates a nice, warm environment for proofing dough.)

After they have risen, remove them from the oven and then preheat the oven to 350 degrees. Then place the loaves in the oven and bake for about 22-25 minutes.

They will start to develop a nice, golden top. At this point, it’s very important to carefully cover them with aluminum foil so that the tops won’t burn. The center of the loaves will take a little more time to bake.

Return the loaves to the oven to cook for 15 more minutes for a total cook time of 40 minutes.

Remove them from oven, remove the foil, and let them cool on a wire rack.

Combine powdered sugar and milk to make a glaze and drizzle it over the cooled loaves. 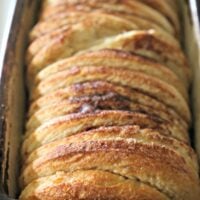 Serving fresh-from-the-oven bread and rolls is easy with Rhodes products. Every item is portion controlled and preformed – just place dough on the pan, Rise, bake and serve.

Their superior ingredients and quality assurance guarantee you will always have scrumptious flavor, consistent performance, uniform size, and appealing aroma. In short, they give you the best!

Be sure to head over to RhodesBread.com where you will find this recipe along with hundreds of other recipes using Rhodes Bake N Serve frozen bread in the recipe section.