Breakfast “treats” can be a challenge for people who are trying to follow a gluten-free diet. We all know that sometimes the quality of bread-like gluten-free products falls short of their regular counterparts. But that is not always the case.

With a little help from a box of King Arthur Flour’s Gluten-Free All-Purpose Baking Mix, you can whip up a batch of Cinnamon Maple Waffles. Your gluten-eating friends just might not believe that they are gluten-free.

I picked up a box of the gluten-free all-purpose mix when I was at Earth Fare this past week. I was trying to come up with a new recipe and was searching the shelves when I spotted the box. I was immediately drawn to the recipe for Cinnamon Streusel Coffeecake. Then I saw recipes on the box for both pancakes and waffles. At that point, I knew that I had to buy the box and make some breakfast goodies. It was past time for me to have a break the routine of just “eggs” for breakfast.

I always put cinnamon in my pancake, waffle and French toast recipes. It’s just one of those things. It’s like it is mandatory in my kitchen – you know? So, I made a few modifications to King Arthur Flour’s recipe. I added cinnamon to the recipe, reduced the milk a little, added maple syrup, and increased the amount of vanilla.

If you love the taste of maple and gluten is not a problem, then be sure to check out our recipe for Maple Donuts made in an air fryer. They’re perfect for Fall or any time you crave the taste of sweet maple. 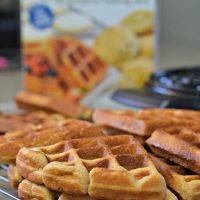 King Arthur Flour notes that gluten-free waffles take longer to bake than conventional waffles. Freeze any leftovers. You can reheat them in your toaster.

These little treats are great topped with more maple syrup. They can be adapted for dinner – just add some chicken for chicken and waffles. Dessert? Add fresh fruit and some whipped cream. Or ice cream and chocolate syrup. Who knew that waffles could be so versatile?