These Quick Cinnamon Roll Muffins are a twist on classic monkey bread but without all of the fuss. They’re packed with cinnamon and topped with creamy icing.

With some tasty short-cuts, you won’t be stuck in the kitchen all day making these sweet treats.

Let me show you just how easy it is to make them.

For this breakfast treat recipe, you need the following ingredients:

🔪How To Make Cinnamon Roll Muffins

You start with a can of Pillsbury Grands Cinnamon Rolls – the large 17.5 ounce can, either with Extra Rich Butter Cream Icing or Original. (They’re both available at Walmart.)

Unroll the cinnamon rolls and then cut each one into six wedges. I like to use a pizza cutter, but a knife should work well.

Next, take five wedges, separate the layers, and roll them around in the sugar mixture. It works best if you start with the larger pieces and do a few at a time.

Place the sugar-coated pieces in muffin cups. The smaller pieces work out best on top.

Bake for 15 to 17 minutes or until golden brown. Remove from the oven and allow them to cool for about 10 minutes.

Now for the best part – the icing! Remove the metal rim from the icing cup and microwave it for 10 quick seconds and then drizzle it on top of the muffins. 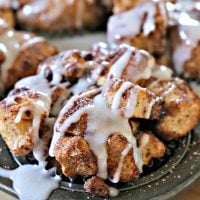 For a festive touch, sprinkle some fresh pomegranate seeds on top.