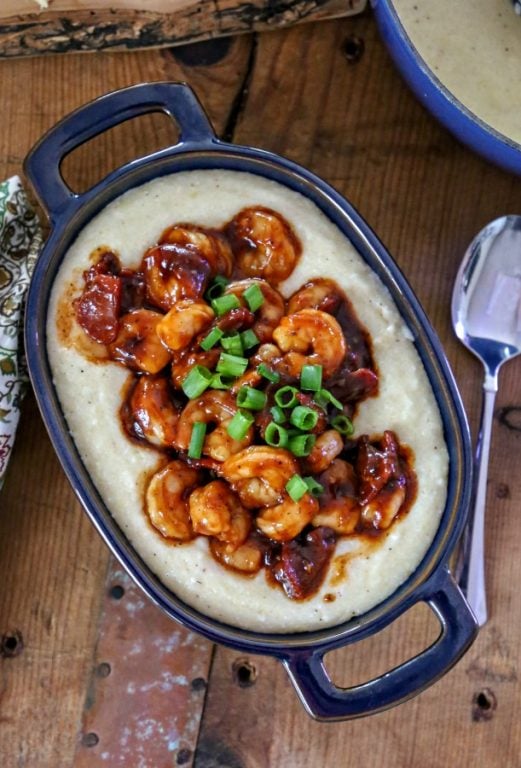 This recipe for Shrimp and Grits comes together in less than 45 minutes.  It’s a delicious dish with an international touch – it’s made with Mahón-Menorca cheese from Spain.  The grits are smooth and creamy and you will want them to get in your belly – pronto!

Mahón-Menorca is produced on the island of Minorca off of the coast of Spain.  The cheese has a unique flavor which is attributed to geographic and climatic factors such as soil characteristics, temperature, humidity, and light.  It’s so special that it is a product with Protected Guarantee of Origin (PGO) status. 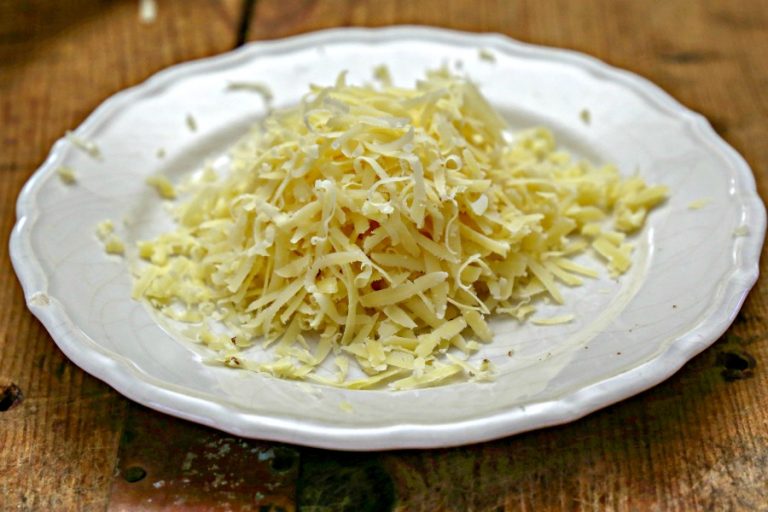 Mahón-Menorca cheese is produced the same way it has been for ages on family farms where cattle graze freely.  The hard variety shreds beautifully and helps to make these grits creamy and addictive.

How To Make Shrimp and Grits

This dish takes less than 45 minutes to make.  I have written the recipe to make the best use of time.  I realize that it might seem daunting to try to cook bacon while also whisking grits.

Combine shrimp and Cajun seasoning in a small bowl and set aside.

In a large saucepan, bring chicken broth, milk, butter and seasonings to a boil over medium-high heat. Lower heat to low-medium and slowly stir in grits, whisking often for 5 minutes. Add cheese and whisk for another minute until the grits become creamy. Remove from heat.

Meanwhile, cook bacon in a large skillet over medium heat until crisp. Remove from skillet and place on paper towels to drain. Drain grease from pan, return it to the burner, and sauté the shrimp and garlic in until the shrimp is cooked. Return cooked bacon to pan along with barbecue sauce and stir to combine.

Serve shrimp mixture atop of grits and garnish with chopped green onions.

Yield: 4 Serving Size: 1
Amount Per Serving: Calories: 639Total Fat: 36gSaturated Fat: 20gTrans Fat: 1gUnsaturated Fat: 13gCholesterol: 277mgSodium: 2938mgCarbohydrates: 42gFiber: 2gSugar: 13gProtein: 37g
Nutrition information is an approximation.
Want to eat this for breakfast?  Go right ahead – after all, the base is made of creamy grits, a southern breakfast staple.  Want to eat it for lunch or dinner?  That’s fine, too!  Just pair it with a green salad to round out the meal. 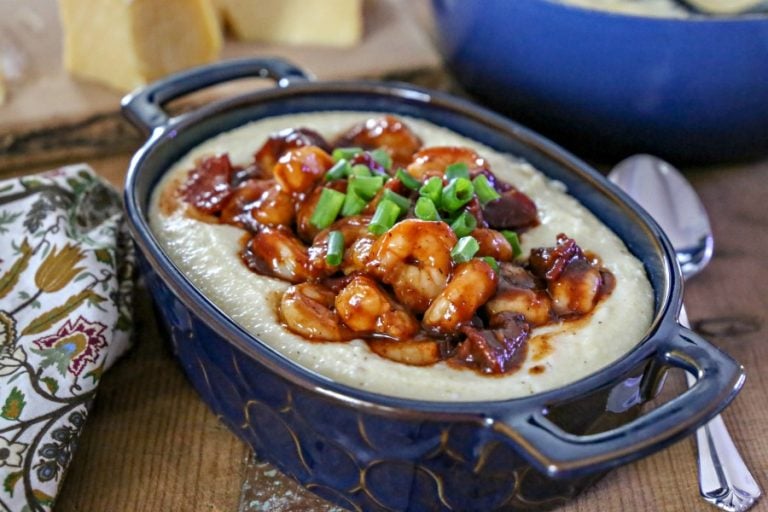 Mahón-Menorca Cheese can be purchased nationwide at Whole Foods, and at other fine retailers such as Fairway Markets, Harris Teeter, Saveway, Kroger, Murray’s, Central Markets, Costco, Gourmet Garage, West Side Markets, Zabar’s, Central and Town & Country Markets in Seattle and at the best specialty stores all over the country.