Black Bean Soup is not only delicious, but it’s healthy too! Making this recipe does not take long because you can use canned black beans and prepared broth. A layer of smokiness comes from the addition of minced chipotle pepper to the soup.

Serve black bean soup with rice and a colorful salad for a well-balanced meal.

For this tasty soup recipe, you need the following ingredients:

🔪 How To Make Black Bean Soup

Pour the cans of beans and their liquid, broth, and chipotle into a Dutch oven. Bring the soup mixture to a boil and then reduce the heat to medium-low. Cover and simmer, stirring occasionally, until the beans begin to break down – it should take around 20 to 25 minutes.

Take a potato masher and coarsely mash the beans in the pot.

Stir in yogurt or sour cream and lime zest and then season with salt and pepper to taste. Garnish with fresh cilantro and serve with lime wedges.

If you like soup on the thicker side, cut the amount of broth in half – only use 2 cups. If that seems too thick, you can always add more broth.

Squeeze a little fresh lime juice over the top of the bowl of soup for a burst of citrus goodness.

What’s so great about black beans?

Black beans are a powerhouse of nutrition, containing antioxidants and fiber to protect your body from harmful toxins. A diet rich in beans may reduce the risk for serious medical conditions such as cardiovascular disease or diabetes.

Plus, they’re pretty darn delicious, too, when cooked and seasoned well.

Hungry for more soup recipes? Check these other tasty recipes at Southern Kissed: 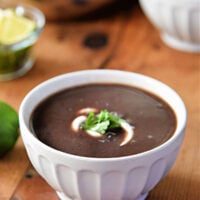 This black bean soup recipe is full of flavor and nutrition. It's a great meal that you can whip up in about half an hour. A layer of smokiness comes from the addition of minced chipotle pepper to the soup.
5 from 1 vote
Print Pin Rate
Course: Soup
Cuisine: American
Prep Time: 10 minutes
Cook Time: 25 minutes
Total Time: 35 minutes
Servings: 4
Calories: 634kcal
Author: Lynda

With meals like Skillet Tortellini with Sausage and Cherry Tomatoes and Pork Chops with Gochujang Brussels Sprouts using common ingredients in uncommon ways, this book will save the day when you don’t have time to make dinner.

The only exceptions are salt, pepper, oil, and butter (these are separated from the other ingredients on recipe pages for at-a-glance reference).

Each recipe is introduced by a test cook or editor with tales of their own home kitchens. Their surprising tricks add up to spectacular flavor that you’ll love when using store-bought items in multiple ways within one dish.

Look for FIVE ingredient DINNERS: 100+ Fast, Flavorful Meals at your favorite bookstore or at Amazon.com.