This Watergate cake recipe is a creamy and delicious dessert that’s perfect for summer. It’s been a family favorite for years, and it’s easy to make thanks to pistachio pudding mix and Dream Whip.

If you like Watergate Salad, then you’re going to love this cake! It’s topped with a delicious frosting that keeps the cake cold—perfect for hot days when all we want is something refreshing.

How To Make Watergate Cake

For this pistachio cake recipe, you need the following ingredients:

If you have never worked with Dream Whip, don’t let it intimidate you. Dream Whip is a commercial powdered mix to make whipped cream. If you have a mixer, you won’t have any problems with it.

To make Watergate Cake, start by preheating your oven to 350 degrees (Fahrenheit). While it is warming up, grease and flour a 9×13 cake pan. Alternatively, you can use Baker’s Joy to prep the pan. Just spray a light layer over the bottom and inside.

For the cake, blend one box of instant pistachio pudding mix, a box of white cake mix, 7-Up, egg whites, and oil in a mixer for 5 minutes at medium speed. Pour the cake batter into the prepared cake pan and bake for 30 – 35 minutes or until a toothpick inserted in the middle comes out clean.

Cool the cake completely before making the pistachio whipped topping.

For the topping, beat 1 box of pistachio pudding mix, milk, and the Dream Whip. Beat until it is thick and peaks form.

Spread the topping on top of the cake and place it in the refrigerator. This cake will need to be kept cold at all times.

If you plan on taking it to a family get together, church potluck, or some other event, pack it in a container and include ice packs. Remember, the icing is made with a dairy product and needs to be kept cold. 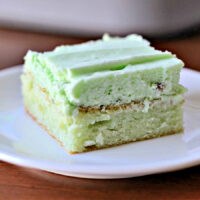 Why Is It Called Watergate Cake?

The cake is similar to Watergate Salad which is made with pistachio pudding, canned pineapple, whipped topping, crushed pecans, and marshmallows.

There are two possibilities of how “Watergate” landed in the name that unites both dishes, though no one knows for sure.

According to Southern Living, the other explanation is that “the cake version has icing to ‘cover up’ any mistakes and, like politics, is chock full of nuts.”