Wow your family and friends with this Strawberry Pudding Pie which combines the creamy goodness of pudding, luscious strawberries, and a sweet meringue topping in a sweet graham cracker crust.

I recall my mother-in-law having a large bowl of (not banana pudding but rather) strawberry pudding. She even picked the small strawberries from her garden. It was one of my husband’s favorite desserts.

I had never heard of strawberry pudding until I met her. Let’s just say that she set the bar pretty high.

On a separate note, I used to subscribe to the magazine all-things southern, Southern Living. I saw a recipe in it once for Banana Pudding Pie. I love bananas, but since I used the last in the house to make some banana bread, I decided to switch things up and try strawberries in the pie instead. I think of it as homage to my MIL.

How To Make Strawberry Pudding Pie

To make this recipe, you need the following ingredients:

The Southern Living recipe includes directions for making a crust from vanilla wafers, but who has time for that nowadays? So feel free to make things easy on yourself and pick up a Nilla Wafer or Shortbread crust from the store. (You’re going to need two crusts for this recipe.)

The next step is to prepare the strawberries. You’ll need to wash them and then slice them – I recommend using an egg slicer so that you get nice, consistent slices. Sprinkle the slices with a little bit of sugar.

Now it’s time for the homemade pudding. Whisk together milk, flour, sugar, and eggs (see the recipe for the measurements) in a saucepan over medium heat. Keep whisking until it thickens – you’re going to feel like you have had an upper body workout. Remove it from the heat and get ready for the layers.

The first layer is a small layer of pudding that goes on the crust. Top it with strawberries.

Now, a layer of vanilla wafers goes on top of the strawberries. It doesn’t have to be neat, but don’t be surprised if your OCD starts to act up.

Top with some more pudding mixture and now it’s time to start the meringue.

Last, spoon the meringue on top of the pies and bake them until they start to become golden. 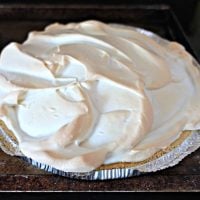 Warning:  Strawberry Pudding Pie is sooooo good, you’ll want to eat it all by yourself. Be sure to share it with your friends, family, and co-workers.