Potato Soup is a delicious, warming dish that will keep you warm on those chilly days. Made with potatoes and onion in chicken broth this soup can be served as an appetizer or main course to fill hungry bellies!

Top it with Cheddar cheese and serve it alongside some warm crusty bread for the ultimate comfort food experience.

For this comforting soup recipe, you need the following ingredients:

🔪How To Make Potato Soup

Begin by frying bacon in a large pot.  I like to cook the bacon so that it is a little bit crisp yet still pliable.

While the bacon is cooking, start preparing the vegetables by washing and slicing the green onions and celery. My family does not like the texture of celery, so we leave it rather large so that we can easily find it and remove it from the soup later.

Remove the bacon from the pot, but leave the drippings in to help flavor the soup. At this point, I like to break the bacon into pieces and place it in the refrigerator. It will be used to garnish the soup.

Dice the onions, and slice the potatoes into small chunks.

Layer it all in a large chili or soup pot. When I say large, I mean HUGE.

On top of the vegetables, pour chicken broth and then add some hot sauce and spices.

Bring it to a simmer and then cover the soup and let it cook for a couple of hours.

After the soup has simmered for a couple of hours, remove the celery stalks.

Add the stick of butter and heavy whipping cream and allow to simmer for an additional 30 minutes.

To thicken it, carefully place an immersion blender

in the pot and puree a small amount. (Note:  while immersion blenders can be used in nonstick cookware, do not allow them to touch the bottom.)  You could alternatively scoop out some of the hot soup and puree it in a blender.

Ladle pureed soup into bowls and garnish each bowl of soup with cheese, bacon bits, green onions, and sour cream if desired.

Like soup? Be sure to check out these other tasty soup recipes at Southern Kissed: 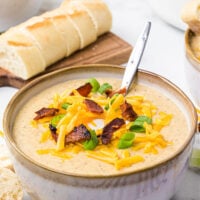 Be sure to come back and tell us how your soup turned out!