Upgrade your side dish repertoire with this recipe for Fried Corn with Bacon and Fresh Jalapeños. This Southern-style side dish is perfect for a summertime BBQ. It’s loaded with veggie goodness, bacon, and just enough spice from the jalapenos to make it interesting.

This recipe was created by Mee McCormick, cookbook creator and owner of Pinewood Kitchen located in Nunnelly, Tennessee.

Fried Corn with Bacon and Fresh Jalapeños is an easy recipe to make at home and enjoy.  In addition to being delicious, it’s naturally gluten-free as well as dairy-free.  That makes it an ideal side dish to serve to company, especially if you aren’t sure if your guests may have food allergies.

How To Make Fried Corn with Bacon and Fresh Jalapeños

As with all recipes, it’s best to gather all ingredients before getting started to ensure you have all that is needed.

For this recipe you need:

Take four strips of bacon and cook them in a skillet until they are crispy. Once it is cooked, remove the bacon from the skillet and allow it to drain and cool on a paper towel.

To the skillet with bacon drippings, add diced red onion, crushed garlic, red pepper, and jalapeños.  Cook until the veggies are soft, about 4 minutes.

Next, add the corn to the skillet and cook until soft.  Take the bacon and crumble it and add it to the corn mixture.

Remove the skillet from the heat and stir in honey and apple cider vinegar.  Season it with sea salt and red pepper flakes.  (If you don’t like spicy foods, you can omit the pepper flakes.)

This side dish is great served with avocado and pairs well with grilled chicken, fish, and other veggies. 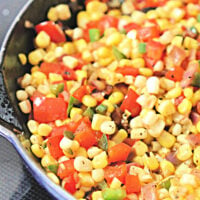 Substitutions: *If meat-free, replace with Coconut Bacon or Tempeh Bacon **If watching sugar, replace with an equivalent amount of stevia. Excerpted from My Pinewood Kitchen: 130+ Crazy Delicious, Gluten-Free Recipes to Reduce Inflammation and Make Your Gut Happy. Copyright (c) 2020. Used with permission of the publisher, Health Communications Inc. All rights reserved.

Pinewood Kitchen and Mercantile is a restaurant like no other and it’s located 45 miles southwest of Nashville.  It redefines farm-to-table in that the restaurant is actually located on the organic farm belonging to Mee and her farmer/rancher husband, Lee.

The restaurant serves Southern comfort food made from fresh, organic ingredients free of GMOs, pesticides, and other harmful additives and preservatives.  It’s the number 1 restaurant in Nunnelly according to reviews on Tripadvisor.

Not only that, just about every dish can be served gluten-free, soy-free, nut-free, dairy-free, vegan, paleo, or keto. All dishes are made with fresh produce from their biodynamic farm, where they also raise grass-fed, grass-finished beef, and pasture wood-raised pork.

For those who are not fortunate to be within driving range, don’t despair.  Mee has written a cookbook that includes over 100 recipes that you’re going to want to dig into.

The cookbook is divided into three parts: the first part tells how Mee ended up at Pinewood Farm, in part two she shares research that she discovered regarding gut health and its connection to food, and part three is where we get to the “meat” of the book – the recipes.

The recipes are Mee’s take on Southern classics that she has recreated with a healthy twist.  Among the recipes are:

Look for My Pinewood Kitchen at your local bookstore or feel free to use the (affiliate) link below to see it at Amazon.com.

Directions To Pinewood Kitchen and Mercantile