This black-eyed peas recipe is easy to make in an Instant Pot. Tender black-eyed peas are steeped in smokey, savory, ham and cooked until southern perfection. My black-eyed peas are enhanced with a touch of onion, which combines beautifully with the natural, earthy nut-like flavor of this traditional field pea. So delicious you won’t want to wait for New Year’s tradition!

Get your Southern fix year-round with this recipe for Black-Eyed Peas. These black-eyed peas and ham are served as a classic southern side dish or meal in an Instant Pot to save you time and energy! Serve them alongside cornbread, southern greens, other veggies, or meat as part of a perfectly Southern meal.

If you’re from the South, you know all about black-eyed peas, greens with pork, and cornbread as a New Year’s Day tradition to bring luck and prosperity for the coming year. Of course, there are as many variations of this tradition as there are of southern black-eyed peas and ham!

I love this recipe because it’s adapted for ease using a modern version with an Instant Pot. Once you try these tasty and time-saving black-eyed peas and ham, it will become a go-to for any of your southern-inspired dinners!

To cook black-eyed peas in the Instant Pot, you need the following:

🔪 How To Cook Black-Eyed Peas in the Instant Pot

Be sure to pick through the black-eyed peas to make sure that there aren’t any pebbles or unwanted items. (It is an agricultural item and things do happen to get picked up unintentionally.

Once you have all of your ingredients ready, select SAUTE on your Instant Pot. Drizzle a couple of tablespoons of oil into the pot. Add the diced onion and saute for a few minutes until the onions begin to soften.

Next, turn the Instant Pot off for a moment. Add the dried black-eyed peas, water, ham or bacon, and salt. Put the Instant Pot lid on and turn the knob on top to close. Select Pressure Cook (or Manual) and set the time for 16 minutes.

Once the black-eyed peas and ham have finished pressure cooking, allow the pressure to release naturally for 8 – 10 minutes. At that point, you can manually release the pressure by turning the valve to VENT.

Yes, they are the same, and you will often see the name used interchangeably. In the southern U.S., it’s traditionally referred to as a black-eyed pea.

A black-eyed pea is classified as a legume (a plant bearing fruit inside a pod), the dense white seed sporting a black spot inside the pod is the pulse. Here in the South, that pulse is a pea, y’all hear?

Are black-eyed peas and cowpeas the same?

Yes and no. A black-eyed pea is a subspecies domesticated in Africa and is one of many “cowpeas” in the U.S.; several types of “peas” or beans are considered cowpeas, field peas, and/or southern peas.

This old-world plant has different descriptors because it was primarily used for crop rotation and fodder for farm animals before making its way to the table as a savory southern dish.

Why are my southern black-eyed peas mushy?

The culprit is overcooking these wonderful southern nibbles. Not to worry, it is typically canned black-eyed peas that do not survive well in long-cooking stews or soups.

So, there’s no need to worry about overcooking with this instant pot black-eyed peas and ham recipe. Your southern black-eyed peas will be tender and have a slight and satisfying snap or pop when you bite into them. Perfect!

How can I make my black-eyed peas thicker?

Carefully blend ½ to ¾ cup partially cooled black-eyed peas and add back to the beans. You can also mash the beans with a fork. Either method, adjust the amount to your desired thickness. Always use caution when blending any hot liquid or soups!

A more traditional method is to create a slurry of 2 tbs of cornstarch and 2 tbs of cooled bean liquid or cool water. Add slowly and stir into the black-eyed peas. 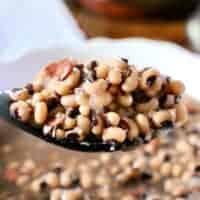 This recipe for Black-Eyed Peas in the Instant Pot will have you gobbling up the South’s favorite legume. Bake a skillet of cornbread and serve them both with other veggies or meat for a perfectly Southern meal.
4.52 from 43 votes
Print Pin Rate
Course: Side Dishes
Cuisine: American
Prep Time: 5 minutes
Cook Time: 16 minutes
Additional Time: 30 minutes
Total Time: 51 minutes
Servings: 7 cups
Calories: 168kcal
Author: Lynda

One way of keeping the little critters from showing up is to refrigerate or freeze your black-eyed peas.

Freezing or refrigerating black-eyed peas is recommended on bags of  Geechie Boy Mill Black-Eyed Peas. While not technically organic, the Geechie Boy Mill peas have no added preservatives or chemicals. I discovered the brand at Whole Foods and am totally impressed. (By the way, this is not a sponsored post and not endorsed by Geechie Boy Mill.)

Be sure to come back and tell us how your Southern Black-Eyed Peas turned out!