These Personal Mini Pumpkin Pies are not only cute but also a good way to make sure that everyone gets a “piece of the pie.”

These tasty little pies are surprisingly easy to make, especially since you can use a store-bought crust.

How To Make Mini Pumpkin Pies

For these sweet treats, you need the following ingredients:

You begin by rolling out the crust on a lightly floured surface.  To cut out the individual pie crusts, take a rim from a wide-mouth jar and use it as a “cutter.”

Cut out 21 circles and place each one in a muffin tin well.

You can bake these the day before the big event and then simply top them with some whipped cream and sprinkle with cinnamon on the day you wish to serve them.  Or you can even bake them days ahead.

Because of the fat content, pumpkin pie freezes well.  You just need to be sure that they have fully cooled and then wrap them well before placing them in the freezer.  Take them out the day before you need them and let them thaw in the fridge. 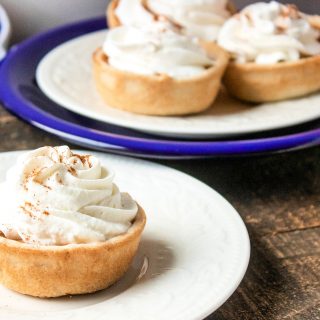 These mini pumpkin pies can be stored in the refrigerator for up to 4 days.

Surprisingly, not everyone loves pumpkin. For those people, I recommend my recipe for Mini S’Mores Pies.