He has been fishing for four decades now. He has learned a trick or two, none of which I am able to share with you. My husband was kind enough to let me share with you a couple of pictures of his recent catch – a 7 pound, 14-ounce largemouth bass. For the record, he strongly believes in catch and release. This beauty was returned to the river after pictures were taken.

My husband also likes to catch crappie. However, since crappie “make for good eatin’,” he brings them home, cleans them, and I cook them. When we eat crappie, we also like to make hush puppies. My husband developed his own hush puppies recipe and they are really delicious. He says the secret is to include diced green bell pepper in the batter.

For this easy Southern recipe, you need the following ingredients:

🔪 How To Make Hushpuppies

Dice one onion and one green bell pepper. Fold them into the batter.

Deep fry until they are golden brown. You will need to flip them over midway to ensure that they are brown all over. Drain on paper towels and enjoy.

There are a couple of stories as to how hush puppies got their name, all with the same idea that the crispy little fritters were thrown to dogs to silence them from barking. I am glad that my puppies don’t bark when we make these because I really don’t want to have to share our hush puppies with them. 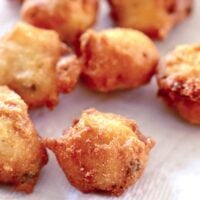 Fish and shrimp would not be right without some hot homemade hush puppies to eat with them. All you need are six ingredients to make a batch.
4.67 from 3 votes
Print Pin Rate
Course: Side Dishes
Cuisine: American
Prep Time: 10 minutes
Cook Time: 20 minutes
Total Time: 30 minutes
Servings: 1 batch
Calories: 744kcal
Author: Lynda

What is your favorite fish to eat?