Hoppin’ John is a Southern tradition that is said to bring good luck when eaten on New Year’s Day. Our dish is made with savory black-eyed peas and rice, and is sure to be a hit with your family and friends no matter what the day is.

This recipe comes from South Carolina Hometown Cookbook and is super easy to make.

According to the South Carolina Department of Parks, Recreation, and Tourism, “Tradition says that eating Hoppin’ John, collard greens, and cornbread on New Year’s Day will bring a year filled with good luck. Made of black-eyed peas and rice, seasoned with ham hocks, onions, green peppers, and spices, the origin of the name is unknown, but it’s thought to be a slave dish from the colonial era.”

For this delicious side dish, you need the following:

🔪 How To Make Hoppin’ John

In a large saucepan, sauté the chopped onion in bacon drippings until tender. Stir in black-eyed peas, ham, and cayenne pepper; simmer for 10 minutes.

Stir in hot cooked rice and season with salt. 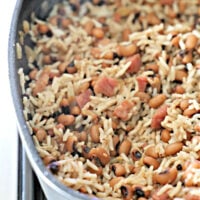 The recipes in the book provide a glimpse into the culinary history of the people of the Palmetto state. While some of the recipes resonate with people across the entire country, many recipes in the book have their origin in South Carolina, like Hoppin’ John and Adluh’s Sweet Potato Apple Cobbler with Pecans.

With South Carolina being a coastal state, there are plenty of seafood recipes included in the book, like Coastal Crab Fritters, South Carolina Cheesy Shrimp and Vegetables, Lowcountry Shrimp Bake, Seafood Étouffée, Beaufort Stew, and Carolina Hot Tartar Sauce to name a few.

The cookbook is divided into chapters to make it easy to find a recipe appropriate for the occasion/meal. In the back of the book is a list of the Food Festivals by Month as well as an alphabetical index.

Look for the South Carolina Hometown Cookbook at your local retailer or at Amazon.com.