Homemade buttercream is made with all-natural ingredients that are sure to satisfy your sweet tooth. It’s perfect for cakes, cupcakes, cookies, and ice cream sandwiches!

Making buttercream frosting is a cinch if you have a good mixer and four ingredients:

The key is to whip the butter really well before you add any additional ingredients. I like to get it looking light and airy before I add powdered sugar. It’s important to slowly start the mixer or powdered sugar will be everywhere. Once the powdered sugar and butter are well blended, then it’s safe to add the vanilla and milk.

It’s safe to leave cakes or cupcakes topped with American Buttercream out at room temperature for a few days. 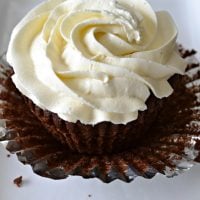 What’s the Difference Between Frosting and Icing?

Icing is typically thinner and runnier than frosting – it’s more like a glaze. It’s the pretty topping that you see on cookies. (Think royal icing.)

Frosting, on the other hand, is thicker and fluffier and is ideal for topping cake.

If you like cupcakes like I do, check out my recipes for Peppermint Cupcakes and Small Batch Lemon Cupcakes. Both are great topped with homemade vanilla buttercream frosting. Or, you could go and buy a box of Immaculate Baking Chocolate Cake mix – it’s practically like making cupcakes from scratch, plus it’s non-GMO. Yea!

Are you a buttercream frosting fan like I am?

Check out these other desserts that pair well with buttercream: