Home » Featured Travel » Tips for Exploring Charleston In One Day

America’s friendliest city, Charleston, South Carolina, is full of charm and history.  I had half a day to explore the Holy City in the Carolinas and want to share with you some tips for making the most out of a limited amount of time.      #ExploreCharleston 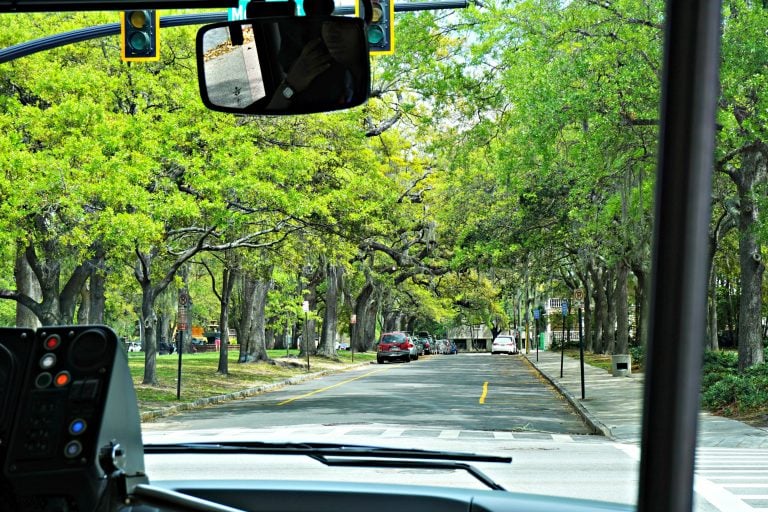 View from inside the free shuttle

If you drove to Chucktown, start by ditching your car.  Find a parking deck ($16 per day) and remember where you parked.  The Visitor’s Center parking deck at 63 Mary Street is a conveniently located near a shuttle stop. 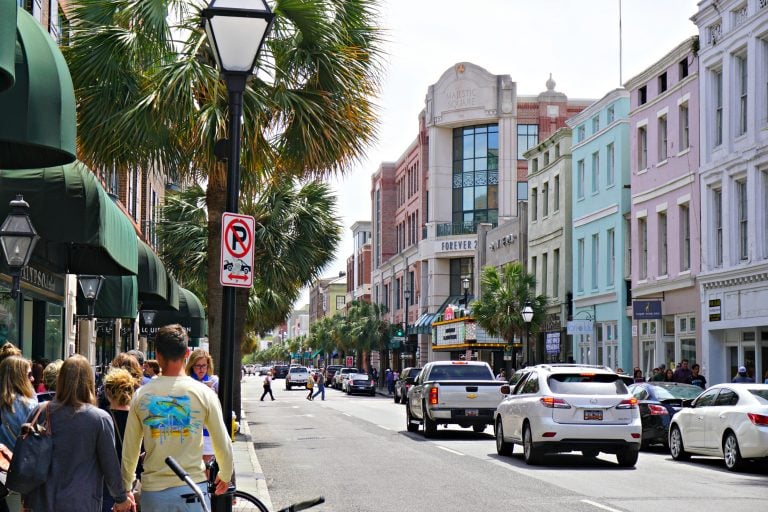 Get off on King Street and explore some of the shops and along the way take note of the palm trees.  Those are palmettos and are South Carolina’s state tree. 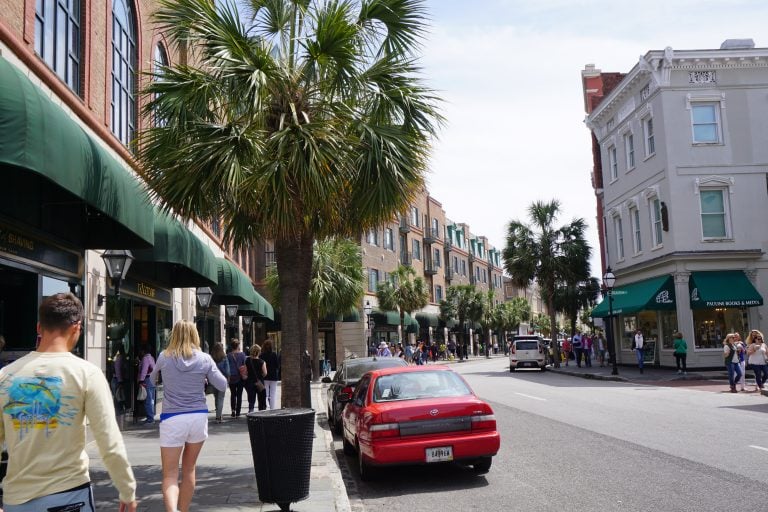 Make your way to the Confederate Museum located at 188 Meeting Street in the historic section.  The museum is located up the stairs of the Market Hall building which was designed after the Temple of the Wingless Victory in Athens, Greece and built in 1841. 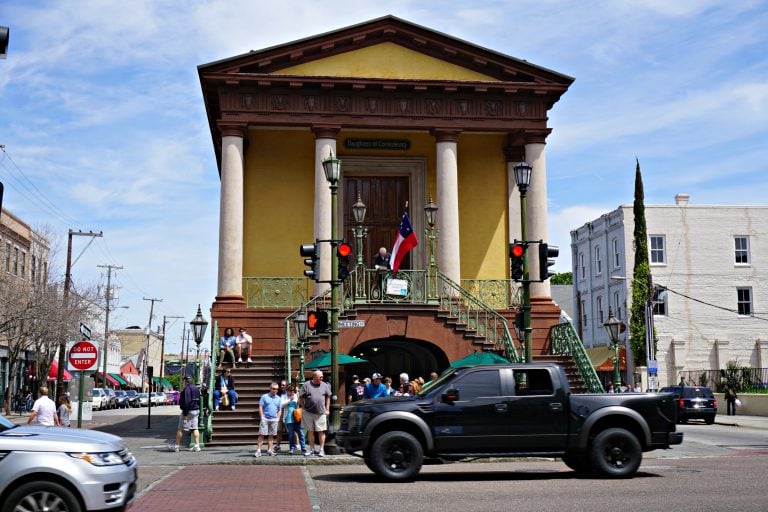 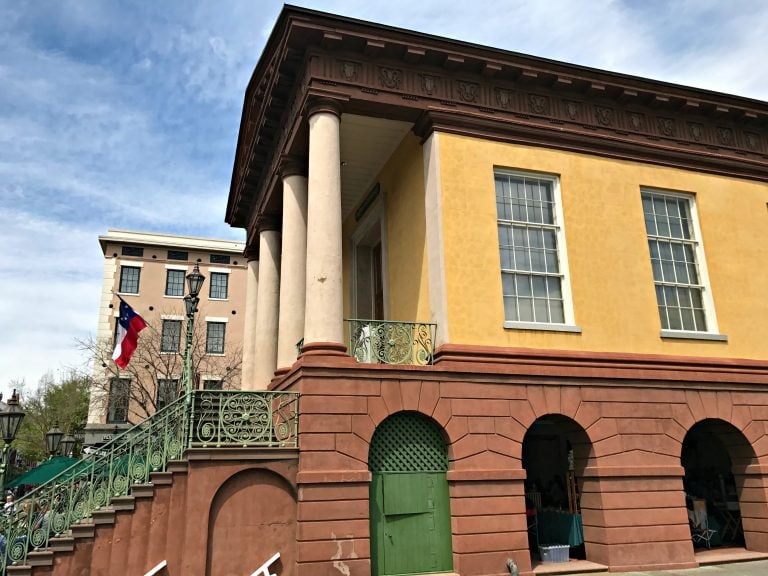 Underneath the museum is the Charleston City Market and one of the places that you have to go to when in Charleston. 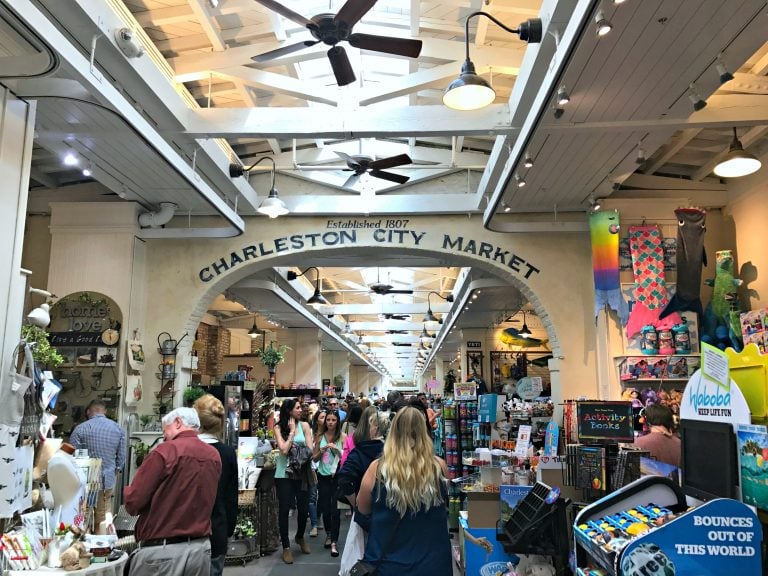 The market is the perfect spot for purchasing a sweetgrass basket that was handmade in Charleston.  Basketweaving was originally brought to this area from Africa during slavery and it has been passed down for more than 300 years. 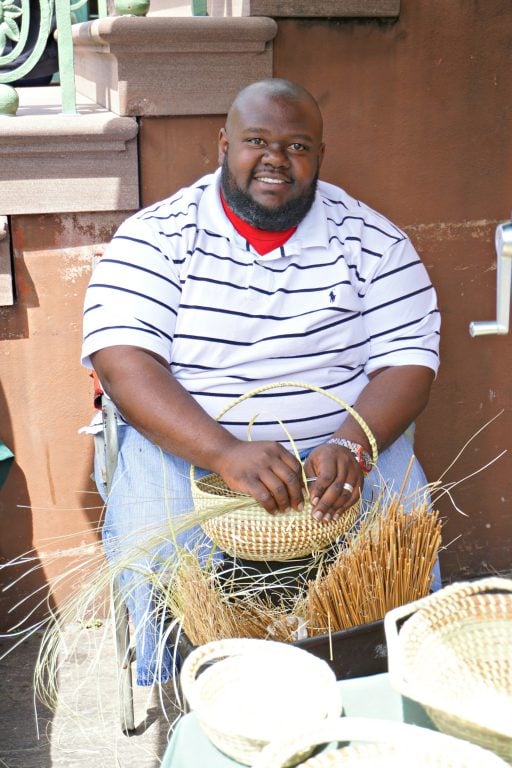 Nearby the city market, you will see signs for carriage tours.  Book one – it’s the best way to see Charleston and to learn about its rich history.  The tour that I took was through Palmetto Carriage Tours and I HIGHLY recommend it.  (You’ll get to see plenty of pictures later in this post that were taken on the tour.) 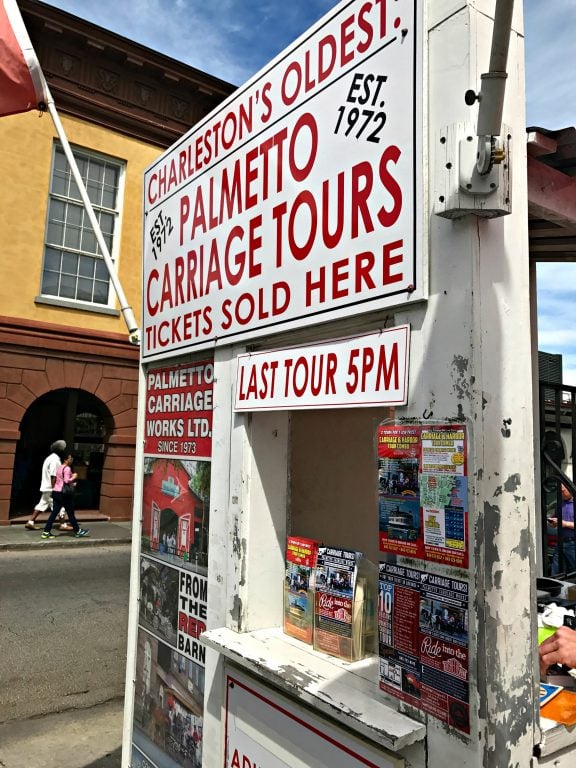 If you have time to kill before your carriage tour, take some time to explore Charleston on foot.  Odds are good that you will pass by one of the more than 400 places to worship, some with quite a bit of history such as the Circular Congregational Church.  (The earliest unmarked grave there dates back to 1695.) 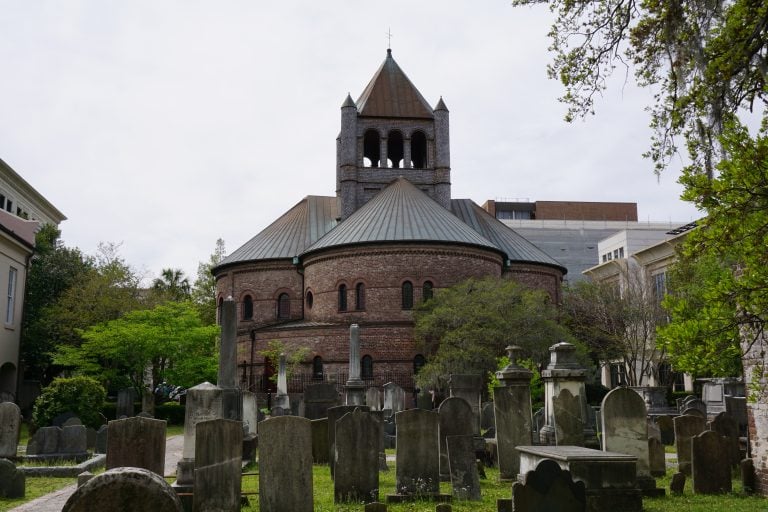 Take time to pause and remember the slaves whose precious lives were traded and sold in Charleston at the Old Slave Mart.  There is a small admission fee to the museum which is open Monday-Saturday, 9:00 am to 5:00 pm. 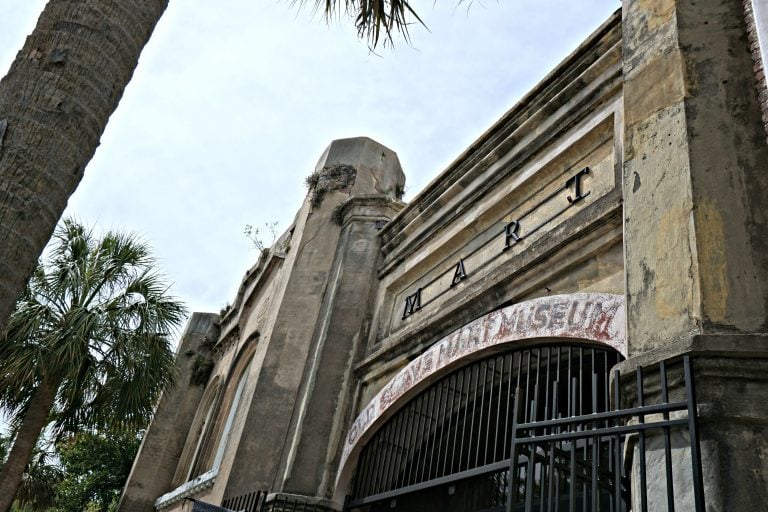 Back to that carriage ride.  Palmetto Carriage tours meet at the big red barn at 8 Guinard Street. 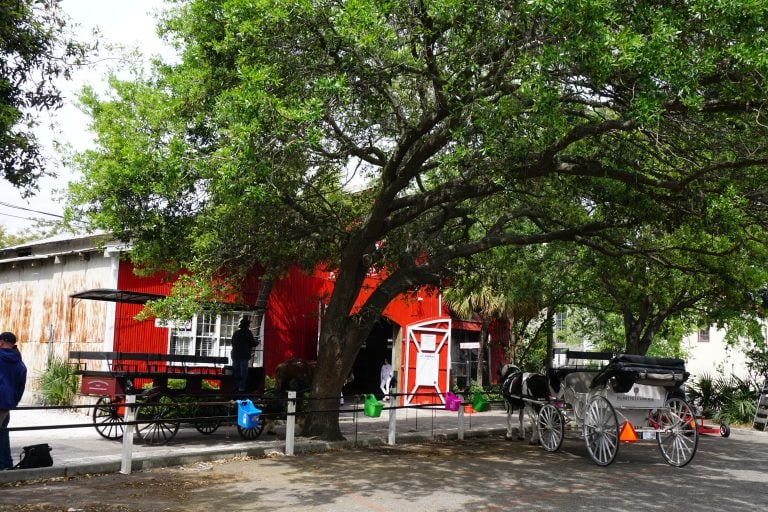 I took the One-Hour Carriage Tour, which allows you to: 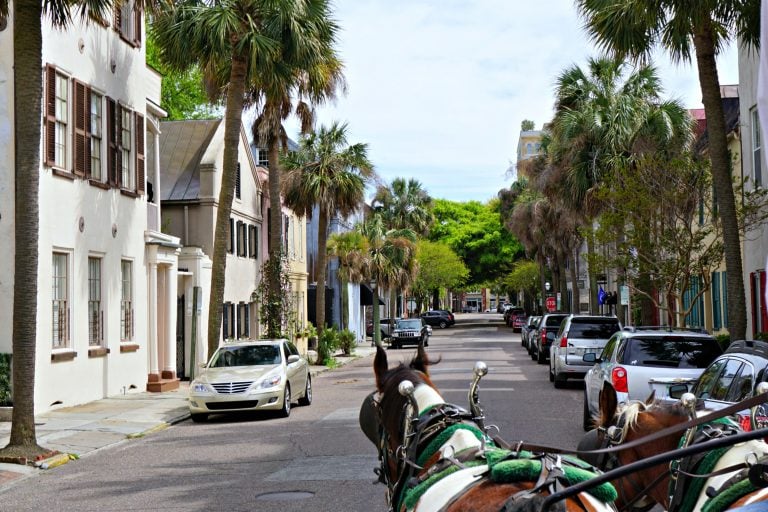 And we did just that.  And by we, I mean my friend Jennifer from SweetTMakesThree.com and about a dozen other people.  We learned about the architecture of different buildings, such as The Cathedral of St. John the Baptist shown below. 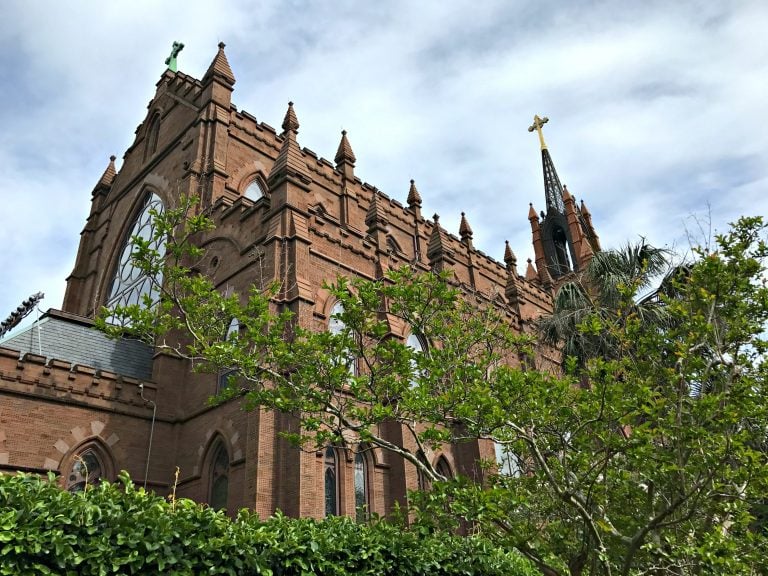 On our tour, we learned about The Great Fire that ravaged Charleston on December 11, 1861.  Over 540 acres, 575 homes, numerous businesses, and five churches burned during the disaster.  (That’s a fire watchtower below.) 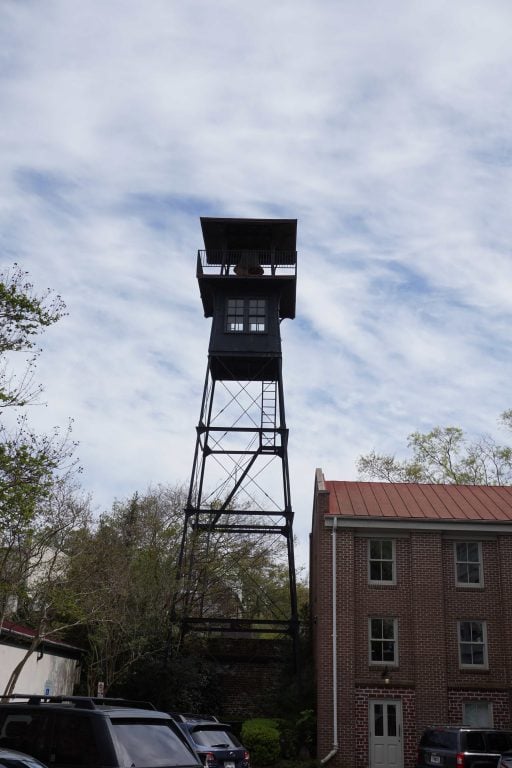 Our tour guide pointed out earthquake bolts on a few of the buildings that we passed.  He told us about the devastating earthquake of 1866 that probably would have registered near 7 on today’s Richter scale. 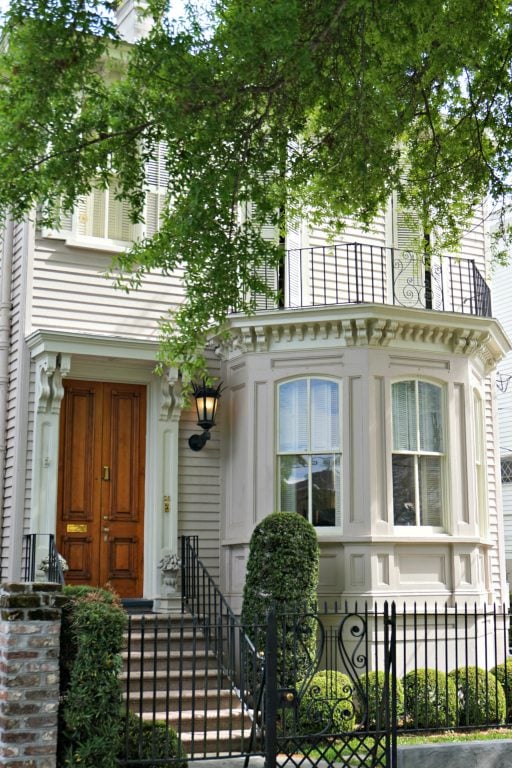 We passed by gorgeous homes and half homes.   What’s a half house?  Well, back in the day kitchens were not located inside of the main house due to potential fire hazards. Therefore the kitchens were built as a stand-alone unit.  Today, those units still stand but have been renovated into full homes. 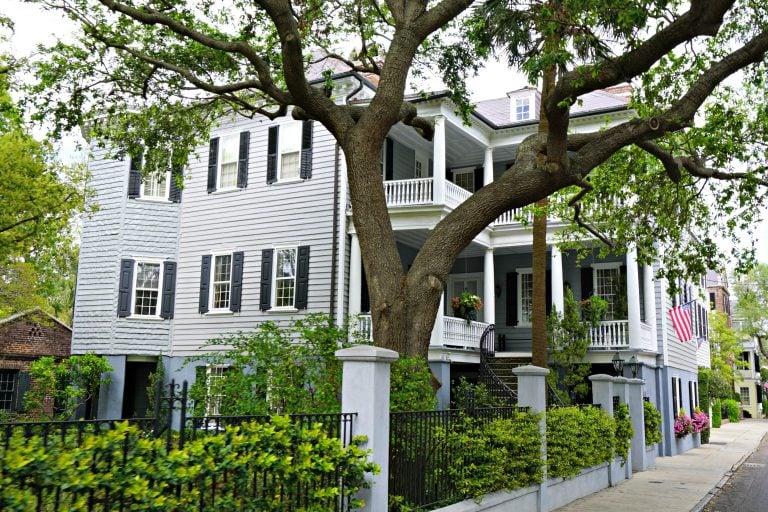 We passed by homes with beautiful wrought iron gates and heard stories about the need for iron during the Civil War.  Some gates were melted for the cause.  We also learned a bit about oleander, a beautiful yet poisonous garden shrub.  (There’s oleander behind the fence below.) 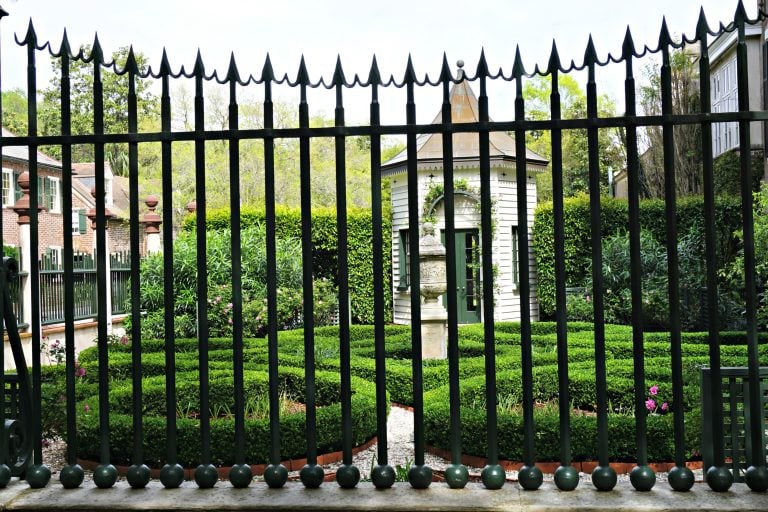 Palmetto Tours took us along Charleston’s Battery, a public park that runs along the waterfront and was once the site where pirates were publicly hung. 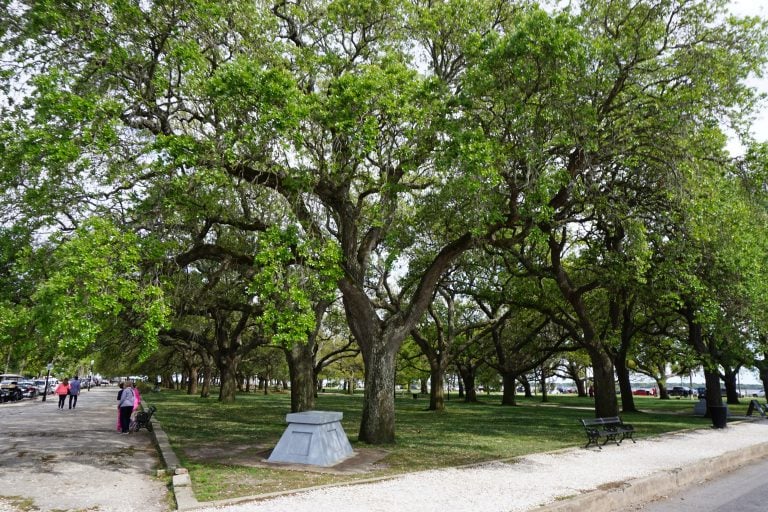 We also heard about the country’s first female serial killer who made her home near Charleston.  Her name was Lavinia Fisher and legend has it that she would serve (oleander?) tea to wealthy male guests at her inn.  Long story short, she and her husband would murder the poor guys if the tea didn’t do the job and they would take all their possessions.

Lavinia and her husband got caught and were sentenced.  On her way to the gallows, it was reported that Lavinia’s lasts words went something like, “If any of you have a message to give the devil, give it to me quick — I’m about to meet him!” 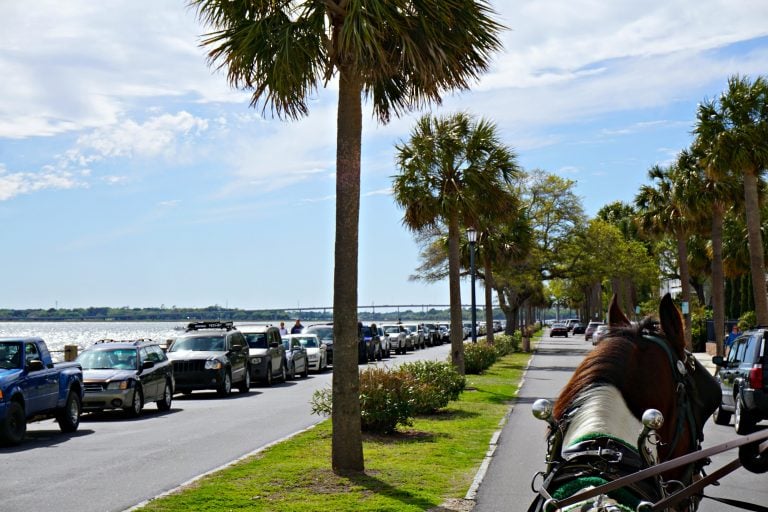 My view of the waterfront along the battery – I sat on the second row of the carriage on the left-hand side.  (Charleston is a great place to take pictures.  Be sure to tag your pictures with #ExploreCharleston.) 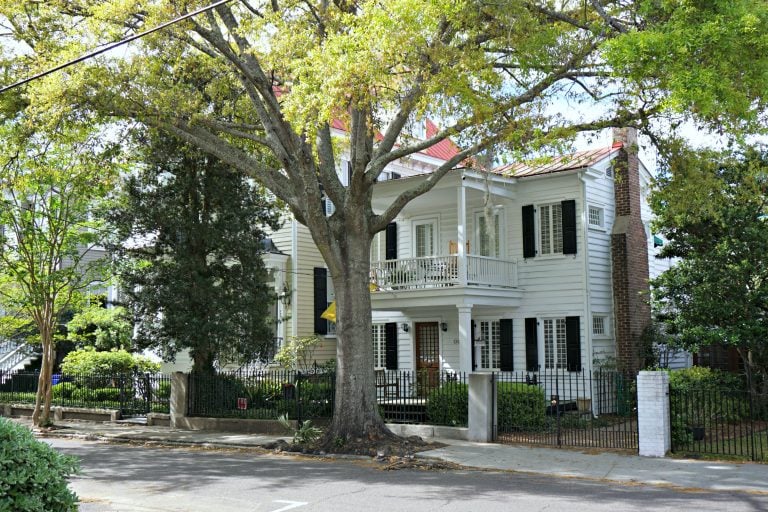 When in Charleston, you need to make sure that you eat some good Southern food.  For dining in the historic section, I can tell you from first-hand experience that the Cru Cafe is pretty kewl.  (Bad joke, I know.  It really was pretty cool.)  It’s practically a stone’s throw away from Palmetto Tour’s big red barn. 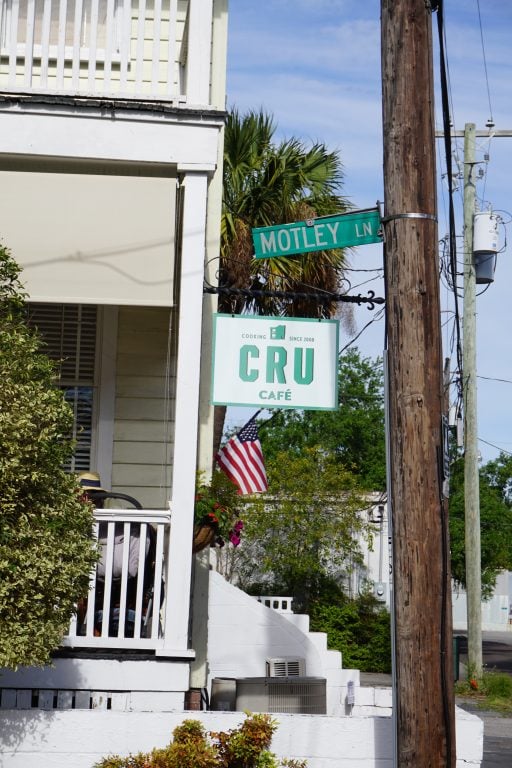 The sign above is a joke, do you get it?  It’s a play on Mötley Crüe.  All jokes aside, this place had AMAZING fried green tomatoes.  You should go there even if it is only for that dish.  The Fried Green Tomatoes come with Pork Belly Croutons, Sheep’s Milk Feta, Smoked Tomato Caramel and cost $12.25.  I would go back there again just for it. 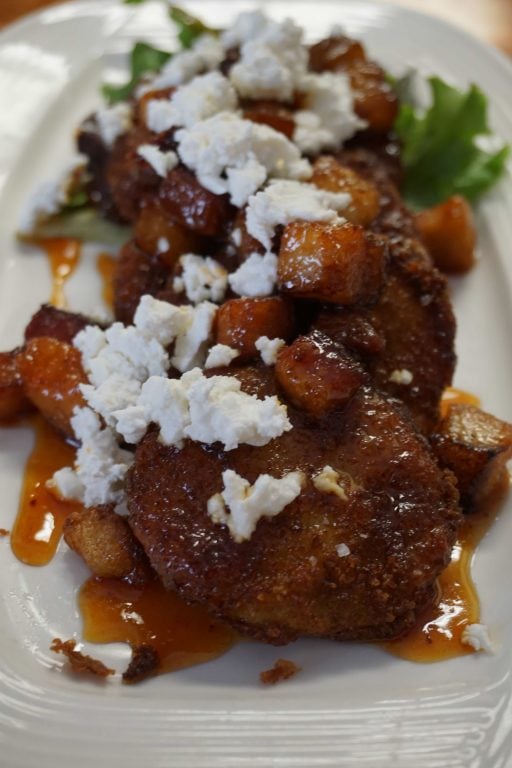 Go on a ghost walk.  With all of her history, Charleston is full of tales from beyond the grave.  Bulldog Tours offers history, food, and ghost tours that depart from their location at 18 Anson Street (which happens to be really close to Palmetto Carriage Tours). 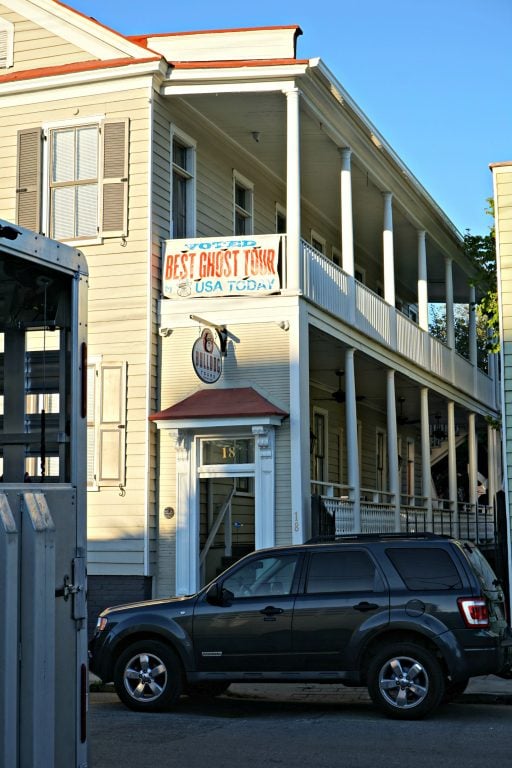 Keep in mind that these are walking tours and you need to wear comfortable shoes.  You’ll go down old cobblestone streets and hear about old fashioned duels that once took place and may have left the loser’s soul to wander. 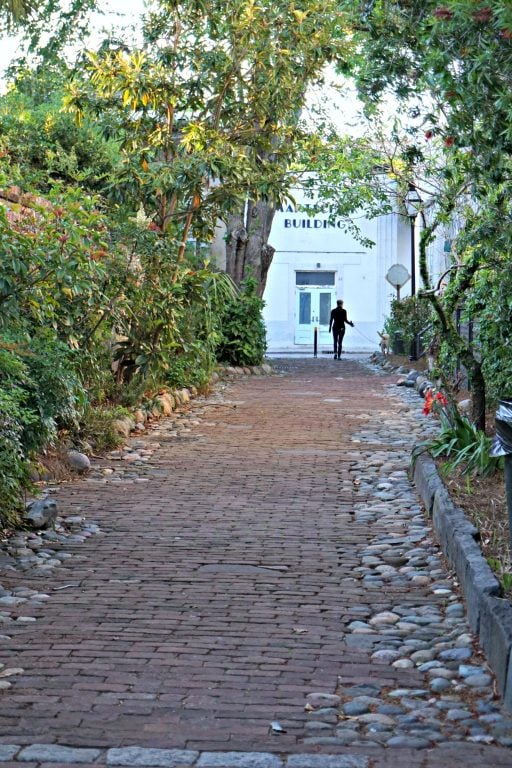 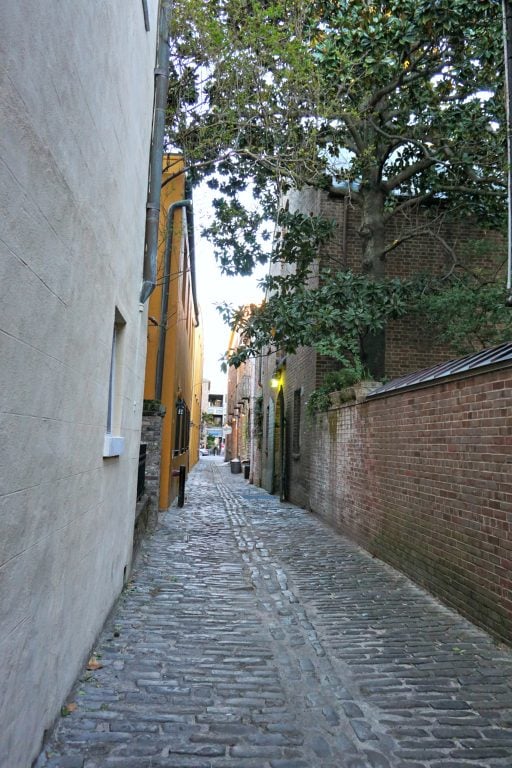 You’ll hear stories of our country’s first president and how he was such a ladies’ man.  He once danced at the “Exchange” or “Customs House” house (pictured below) with a full dance card. 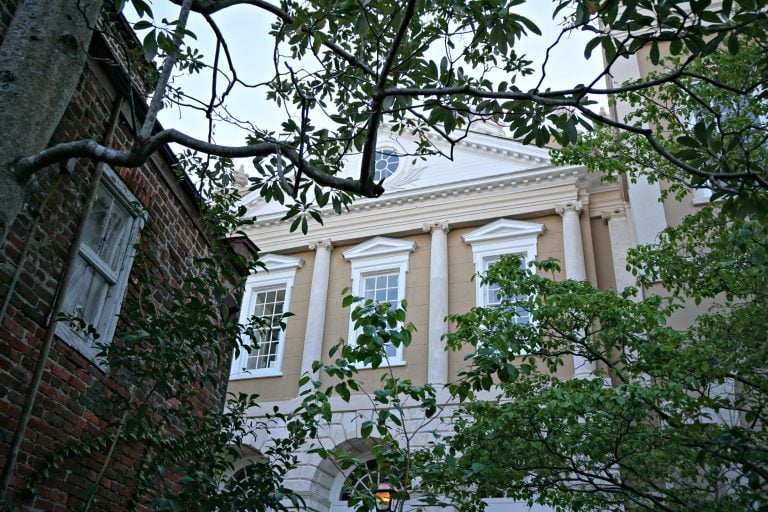 Beneath the Old Exchange is the Provost Dungeon that once held many a pirate.  On the Bulldog Tours, you can enter the dark, damp dungeon and imagine what it was like to be held prisoner there.  You might even catch a specter on your camera. 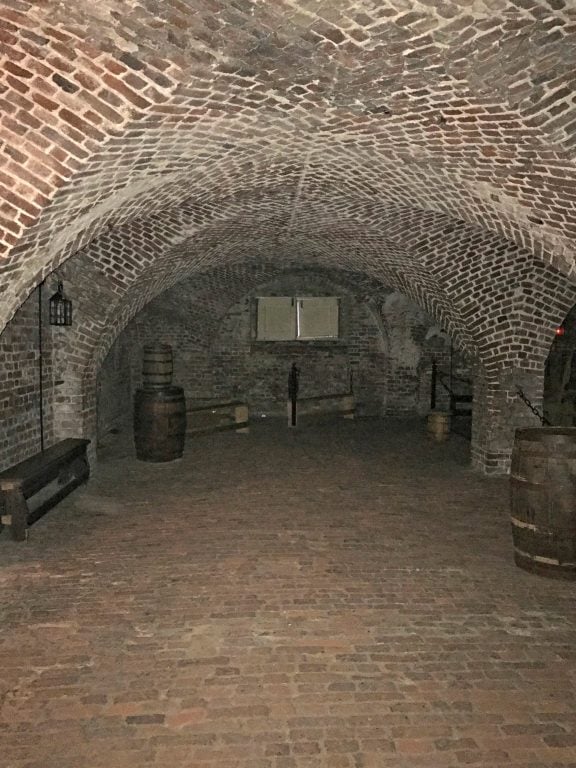 If you have additional time, consider exploring Charleston’s harbor from the deck of one of SpiritLine Cruise’s vessels. 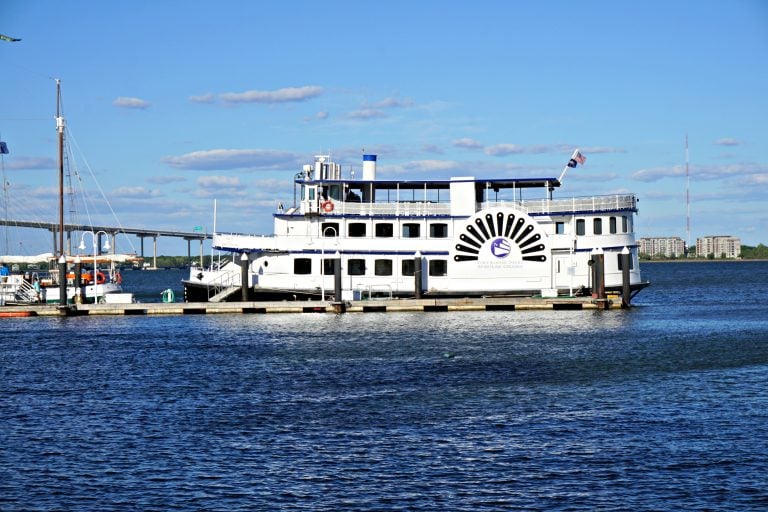 If you have been to Charleston, what are some places that you would recommend to visitors?