You can make brownies rich and fudgy using sweet potatoes. It’s a delicious way to eat your veggies. Don’t you think?

These mouthwatering pictures of Rich and Fudgy Sweet Potato Brownies are brought to you in part by Straight From The Root.

Did you happen to notice my little disclaimer at the top of this post?  It’s true – these Rich and Fudgy Sweet Potato Brownies were made thanks to Straight From The Root, who provided me with some quick and easy packages of USDA ORGANIC veggies.

Now, I could have simply taken those packages of sweet potatoes and boiled or microwaved them for 90 seconds and then eaten them as a healthy side dish.  But, um, no.  Especially not after visiting The Big Man’s World blog and seeing his recipe for HEALTHY SWEET POTATO BREAKFAST BROWNIES.

Who wouldn’t want to eat brownies for breakfast?

How I Made Sweet Potato Brownies

To make these brownies made with sweet potatoes, I used the following ingredients:

Taking notes from The Big Man’s World, here’s what I did – mistakes and all.  I started off by smooshing the sweet potatoes in the packages since they needed to be pureed anyway.

Then I put all of the ingredients, sans the chocolate chips, in my Vitamix blender and blended away.  The batter was too thick – I chalked that up to too much sweet potato, so I added ¼ cup aquafaba and then blended some more.   (I probably should have initially put the sweet potatoes in the blender with aquafaba to liquify them.)

I then added some Enjoy Life chocolate chunks and mixed them in by hand.

I put them in the oven and baked them for 22 minutes.  But…unlike The Big Man’s World, that was not enough time for my version to bake long enough.  Extra sweet potatoes + aquafaba = approximately 40 minutes bake time, more or less. 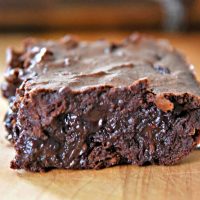 To cut back on calories, use ½ cup miniature chocolate chips.

Isn’t it interesting that sweet potatoes can be used to make brownies?

About Straight From The Root

You can learn more about Straight From The Root by visiting their website at www.sftroot.com.  For creative ways to use your veggies, check out their recipe tab.