Where To Eat in Asheville, North Carolina

While I was in Asheville recently, I participated in a restaurant crawl the evening after the Food Blog Forum. One thing that really resonated with me about Asheville is that they take their dining scene seriously. Fresh produce. Local, grassfed beef. Amazing drinks. James Beard finalists.Heavenly eggs. Chocolate desserts. Fresh lobster.

There were several downtown restaurants that were giving those of us who attended the conference a taste of Asheville’s incredible dining scene. We were split into groups and each group hit six – yes SIX – restaurants in one evening, spending 25 minutes in each. Below are the restaurants where my group dined. * 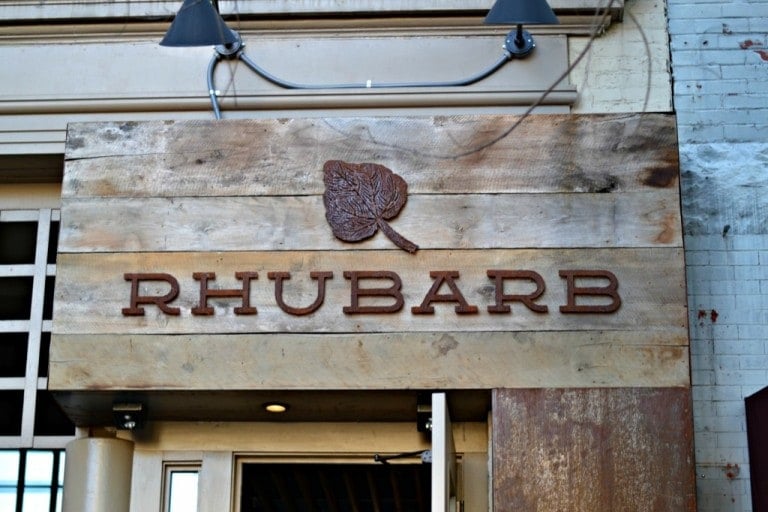 Rhubarb, at the heart of Asheville on Pack Square, is a comfortable place for friends, families and strangers to gather and share in the magical recipe of food and drink and the table. The menu is inspired by seasonal, local ingredients and pays homage to the bounty of regional and American cooking. A wood-fired oven and grill complement the rustic creations. Rhubarb serves lunch, dinner, brunch and Sunday Supper, a communal dining experience, served family-style that reflects the bounty of the local weekend markets and the products of the guest farmer. 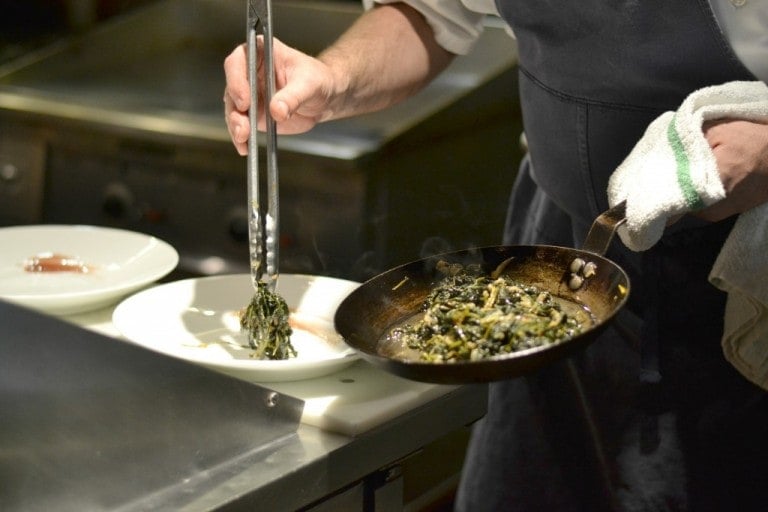 John Fleer, Chef and Owner of Rhubarb, is a father of three sons and three time finalist for the James Beard Best Chef in the Southeast award. Following graduation from the Culinary Institute of America, John joined Blackberry Farm, where he served as Executive Chef from 1992 until 2007. During that time Fleer and Blackberry received many honors, most notably international status as Relais’ Gourmand. In May of 2009, John took his first step back across the Blue Ridge from Tennessee, opening Canyon Kitchen at Lonesome Valley in Cashiers, NC. Rhubarb is the next step in Fleer’s jouney; he hopes to bring the relaxed atmosphere of his previous pastoral posts to Pack Square, broadening his approach with freestyle American cuisine well-suited for its location at Asheville’s vibrant crossroad. 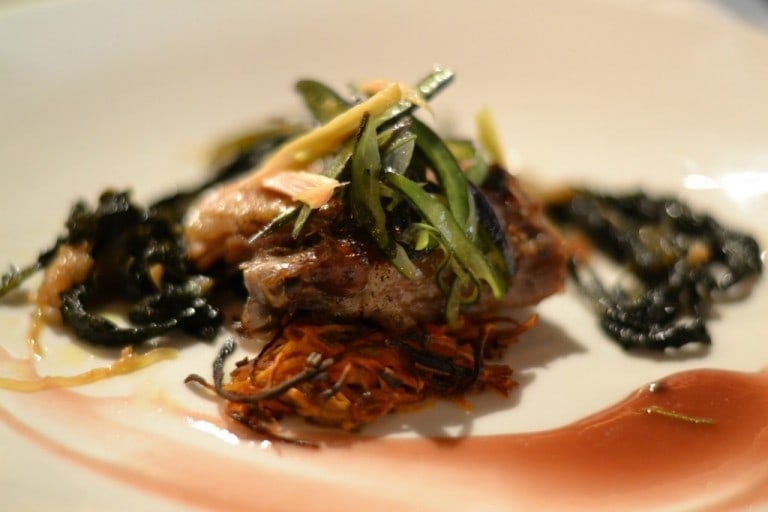 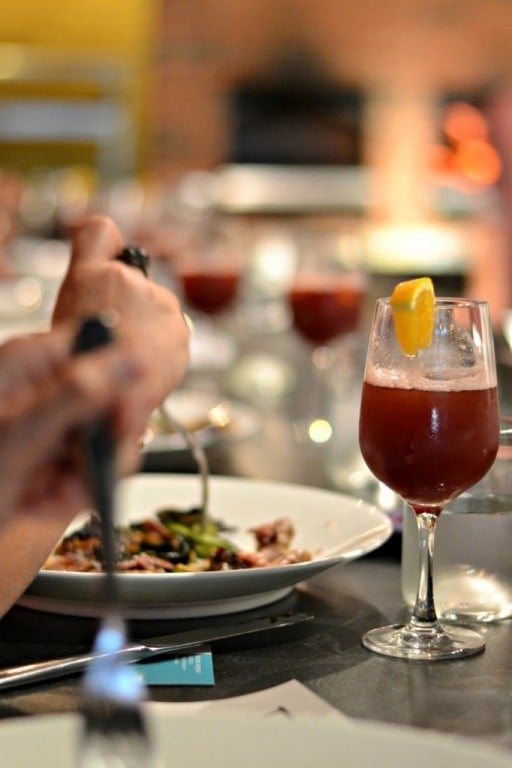 Rhubarb Shandy
Adapted to accompany the duck confit with a splash of Banyuls–a wine from the home of duck confit in the southwest of France. 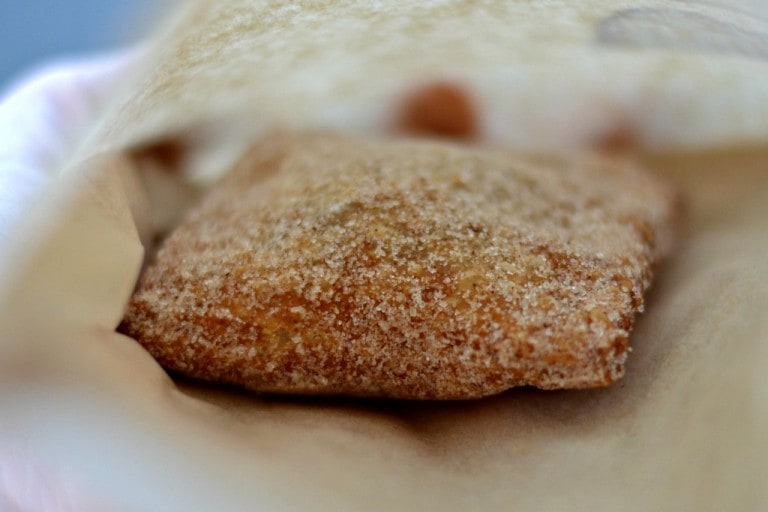 We were each given these cute little pies to take with us as we were leaving the restaurant. Licking our fingers we walked on until we reached our second stop. 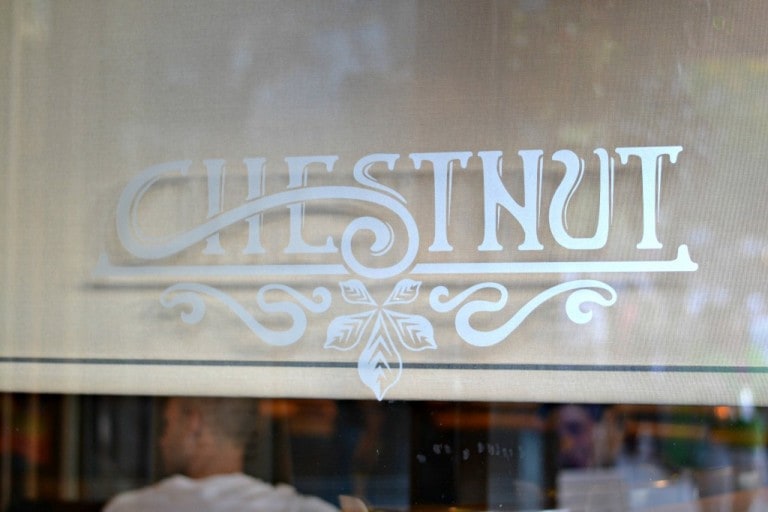 Chestnut is an American restaurant in the heart of downtown Asheville, NC. They remodeled the 1920s era building to include a nice balance of modern touches while preserving the original tin ceilings and heart pine floors. Joe Scully, the chef-owner, graduated from the Culinary Institute of America with Honors. He has worked at The Waldorf Astoria, the United Nations, Cherokee Town and Country Club in Atlanta, Ga and is also owner of the Corner Kitchen in Historic Biltmore Village. The food and cocktails are created with an eye toward authenticity, local ingredients and handcrafted goodness.

Executive Chef Joe Mitchell is originally from Springfield, Ohio. He started as a dishwasher at a busy Damon’s, moving quickly through all stations to become a corporate trainer. He then became a sous chef at the Blue Gator, then executive chef at Abrio’s Brick Oven before being named General Manager. After moving to Asheville, Joe was hired as sous chef at Chestnut. Less than twos later, he earned the position of Executive Chef. 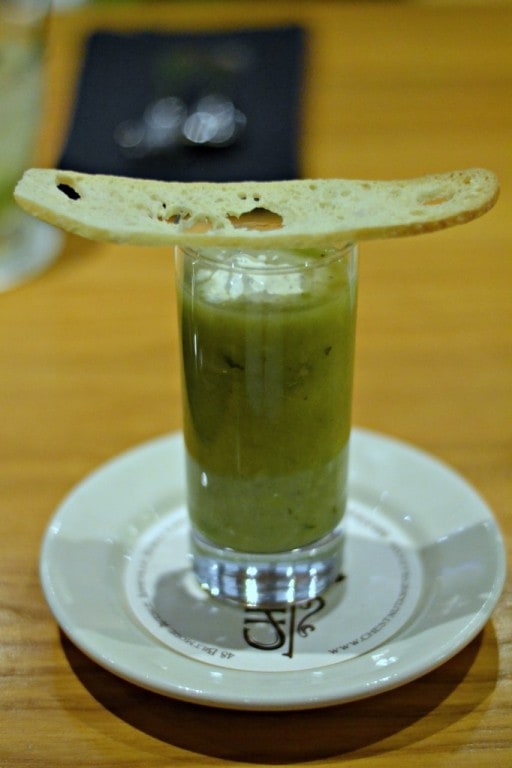 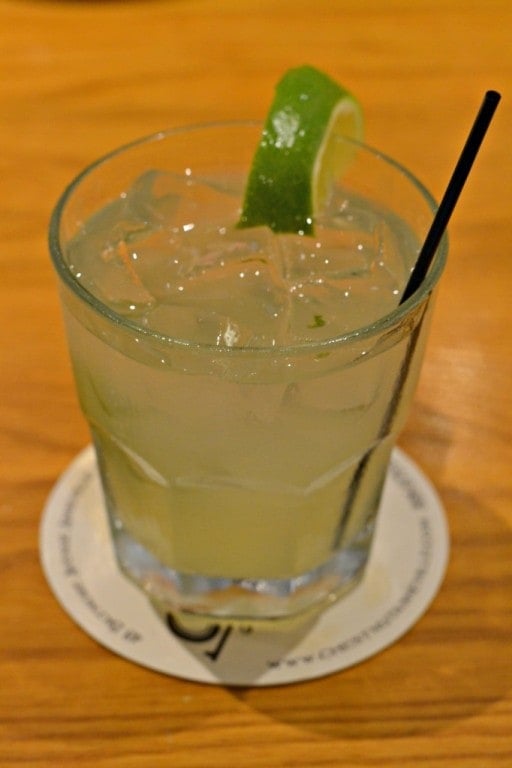 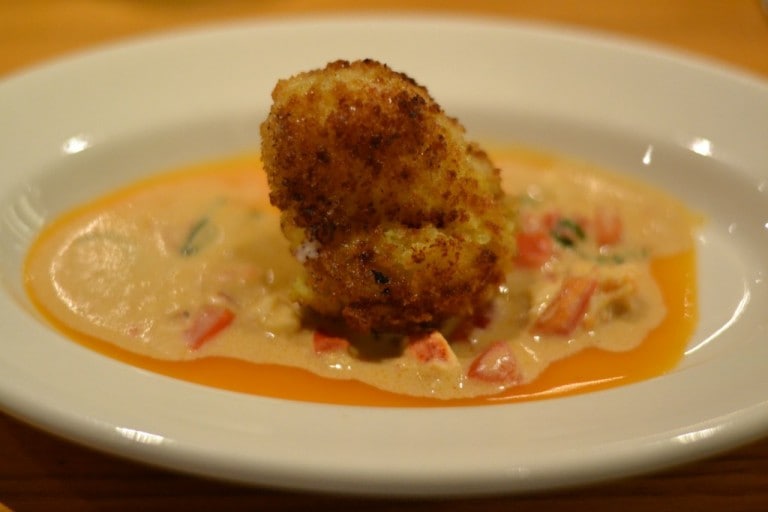 That was the first time I had ever had gazpacho. I certainly hope it was not my last because it was really good. After our 25 minutes were up, we headed to our third stop of the night. 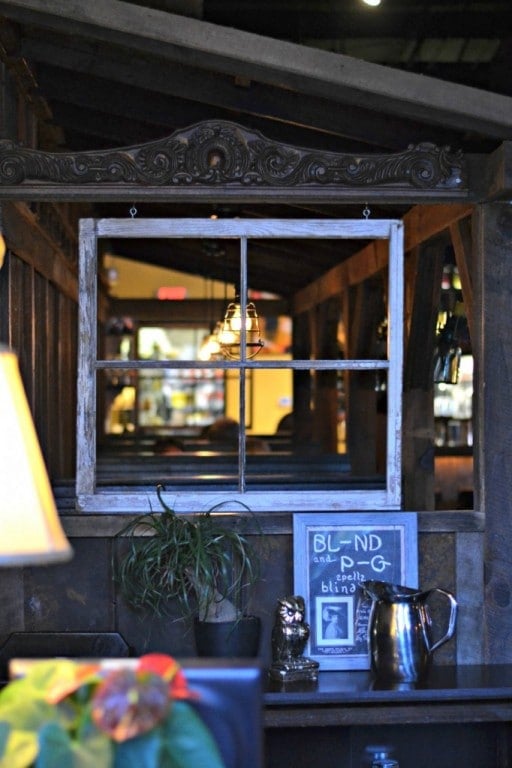 Seven Sows is a restaurant which focuses on an impressionable and memorable dining experience with down to earth decor, warm and friendly service and delicious food and drink rooted in the nostalgia of their heritage and past. Seven Sows sets out to embody the interpretation of a southern focused cuisine with impressions of French and modern American techniques and above all a boundless and bold creative spirit.

Chef Mike Moore was born in Elm City, Wilson County, North Carolina. His family settled in Eastern North Carolina since prior to the American Revolution and among an agricultural community of sharecroppers and heritage farmers which is his roots. Leaving a career in law enforcement in Raleigh, NC in his mid twenties, Mike worked and trained in San Francisco at a number of restaurants in and around the bay area before relocating to Asheville, NC in 2005. 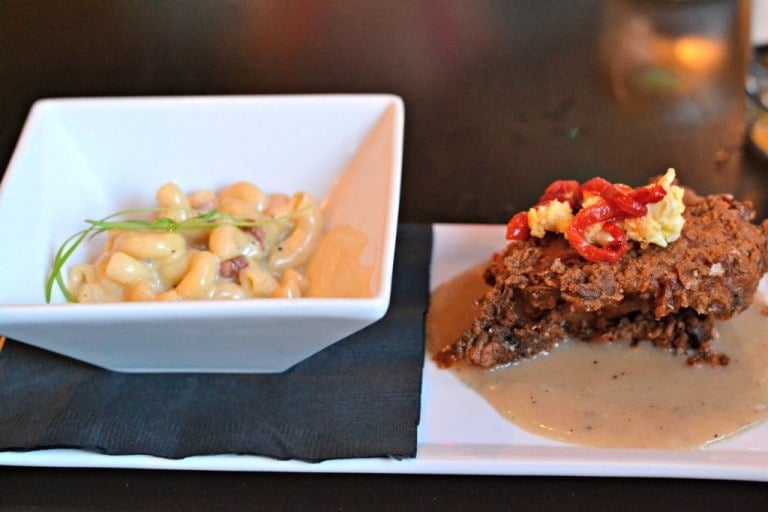 I sensed a smoky flavor to the mac & cheese and really enjoyed it. At this point I was starting to feel a little full and did not eat all of my chicken even though it was good. Three restaurants down, three to go. 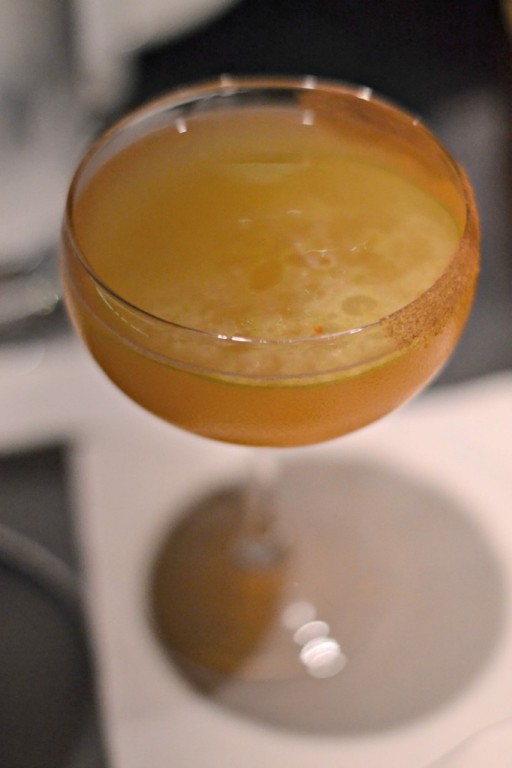 Delicious Cocktail at Nightbell (I apologize that I cannot recall its name.)

Nightbell a whimsical restaurant and lounge with imaginative food, sensational sweets, creative cocktails, and mesmerizing music that make any evening special. The restaurant & lounge draws its name from long-ago days when a customer rang the “nightbell” for an after-hours service entrance. Enter the restaurant & lounge via a vintage storefront that sets a mysterious, intriguing ambiance, then ascend a staircase to enter the dining room and bar. Here you’ll find Chef Button’s modern interpretation of traditional American food served small-plate style, sophisticated craft cocktails with hand-carved ice, unique wines from all over the world, and innovative music from across the Atlantic and around the corner.

Chef Katie Button draws her inspiration from an unconventional path that began in a science laboratory and led her to the kitchen. She inspires others to take the road less traveled. Chef Button has been named a James Beard Rising Star Chef Semi-Finalist in 2012-2013, and a Finalist in 2014. Her creations have been featured in national publications such as The New York Times, Southern Living, and Food & Wine. 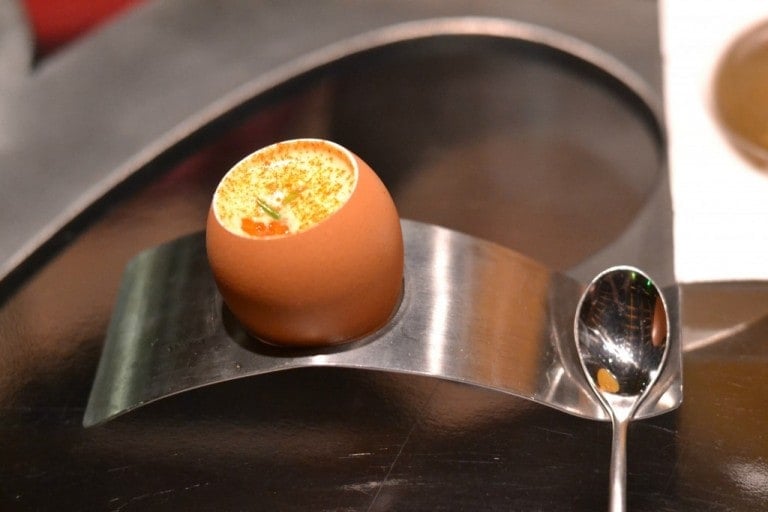 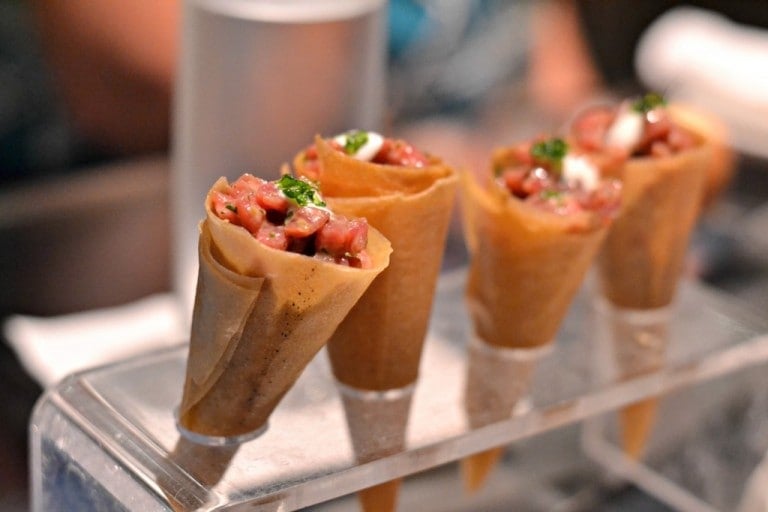 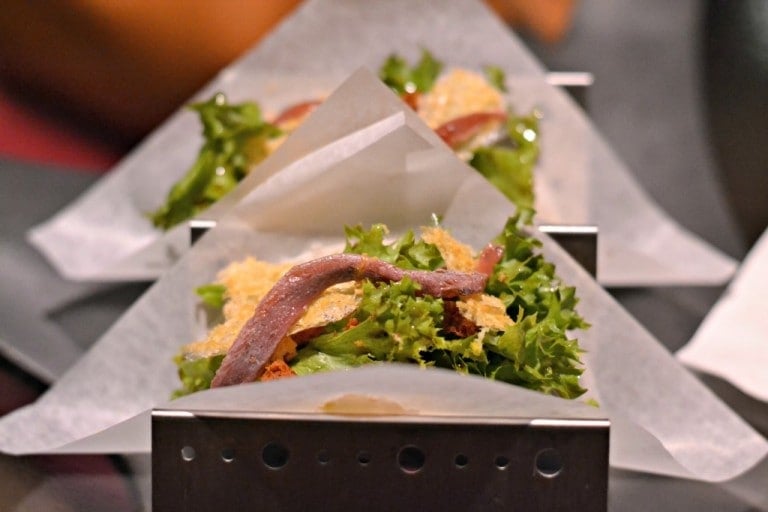 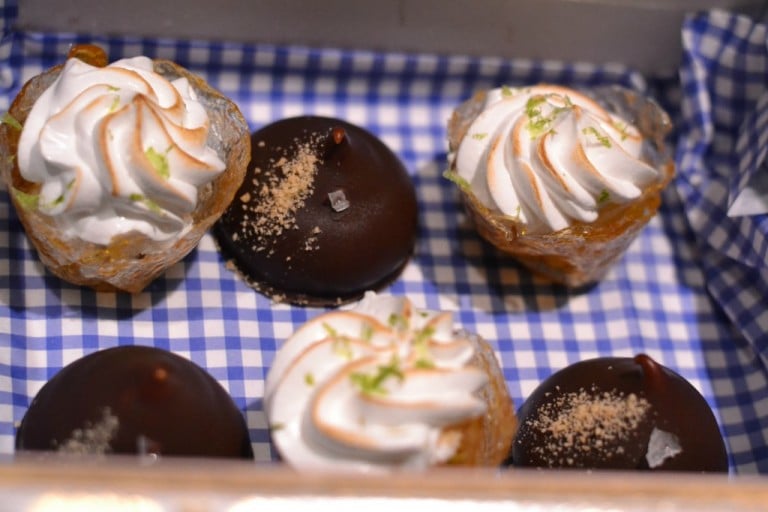 Did you see that “Deviled Egg” above? I think the name is a misnomer – that was one of the heavenliest eggs I have ever eaten. I highly recommend that you try one.

At this point I was beginning to wonder how in the world would we be able to make it through two more restaurants. “Where there is a will there is a way.” I really wanted to experience more of Asheville’s amazing restaurants. On to number five. 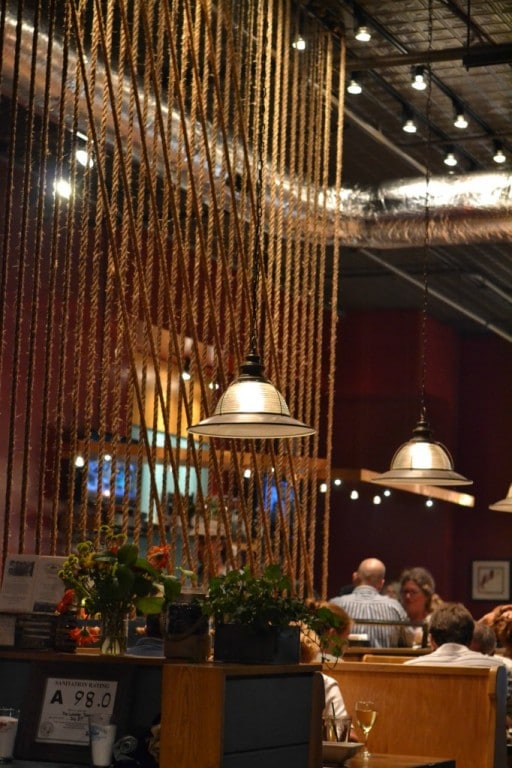 The Lobster Trap only features fresh seafood caught by trusted domestic purveyors and prepared in ways that showcase the delicate flavors and textures of fish, lobster, crabs, shrimp, oysters and clams. Located in a beautifully renovated historic building in the heart of downtown Asheville, The Lobster Trap features live entertainment from local musicians every night. To that, add locally brewed Oyster House beers, craft cocktails, seafood-friendly wines and southern hospitality and you have The Lobster Trap’s formula for success. 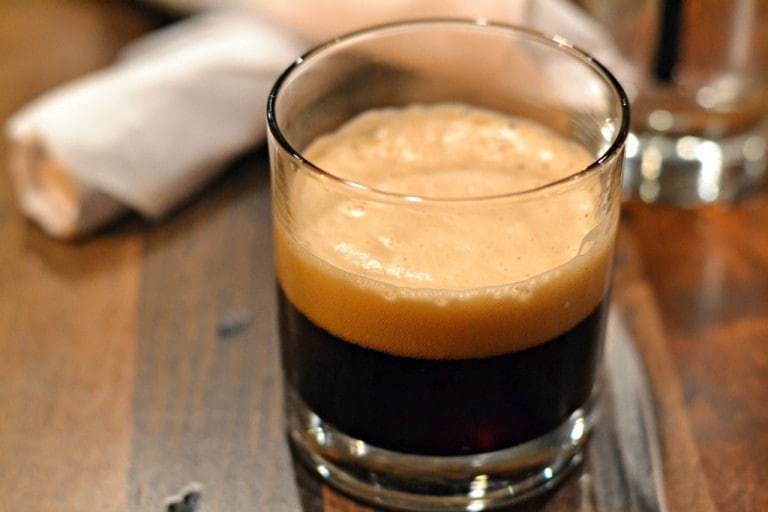 Chef Mike McCarty’s work begins when the doors to the restaurant have closed for the evening. He is on the phone with purveyors until the early morning hours making sure that we have the freshest fish delivered before we re-open the next afternoon. Chef Mike has spent the last 10 years carefully cultivating his relationships with fishermen, distributors and local farmers so The Lobster Trap receives only the freshest fish and ingredients. He and his team are the area’s specialists when it comes to the delicate preparation and pairing of seafood. 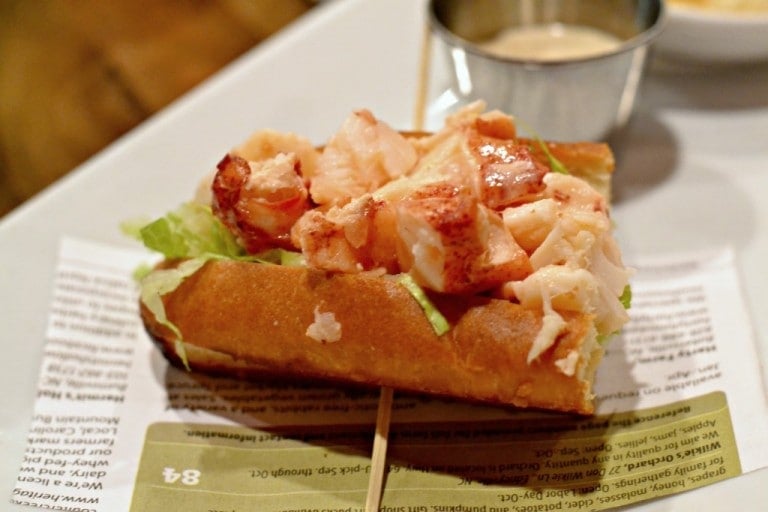 Oh. My. Goodness. I loved the remoulade on the lobster. One more restaurant to go. I felt like I was about to *pop* but was looking forward to what was next. 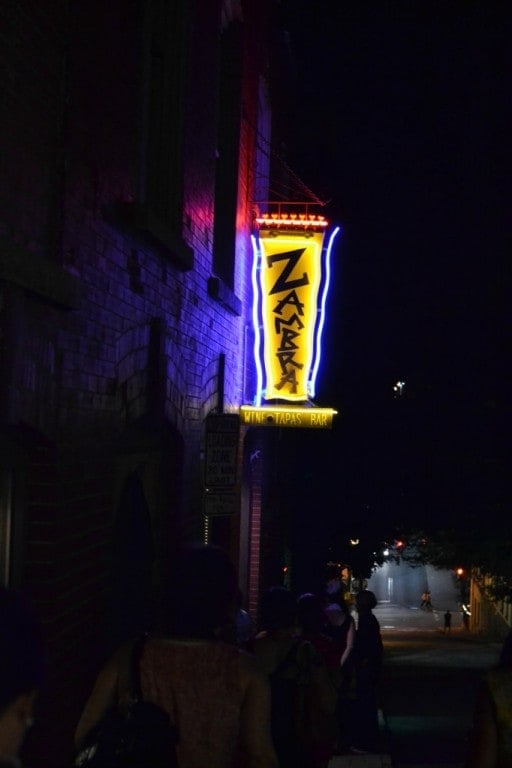 Zambra is a tapas and small plate restaurant located in the heart of Downtown Asheville. They use global and regional influences, as well as local purveyors and farmers to shape their evolving menu. Their extensive wine list focuses on Spanish and new world wines. 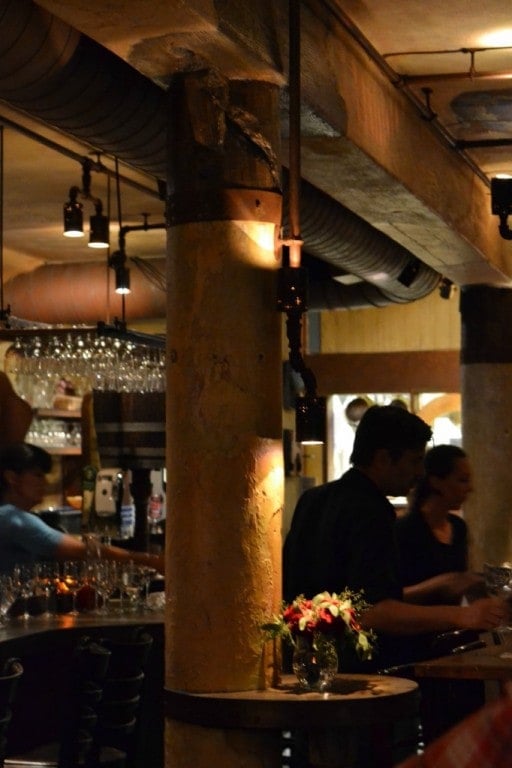 Adam Bannasch has been the chef of Zambra since 2005. After working in restaurants through high school and graduating from New England Culinary Institute in 2000, Adam spent three plus years honing his skills in New Orleans. There he worked at some of the city’s best restaurants, including, Stella, Peristyle, and August. 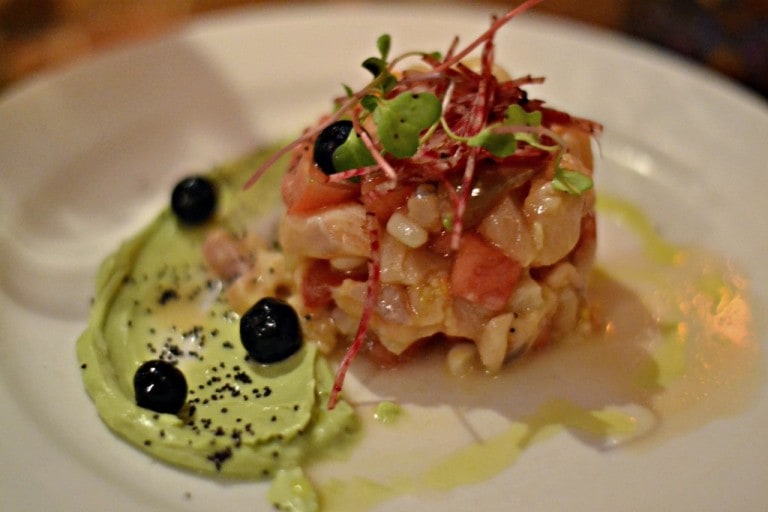 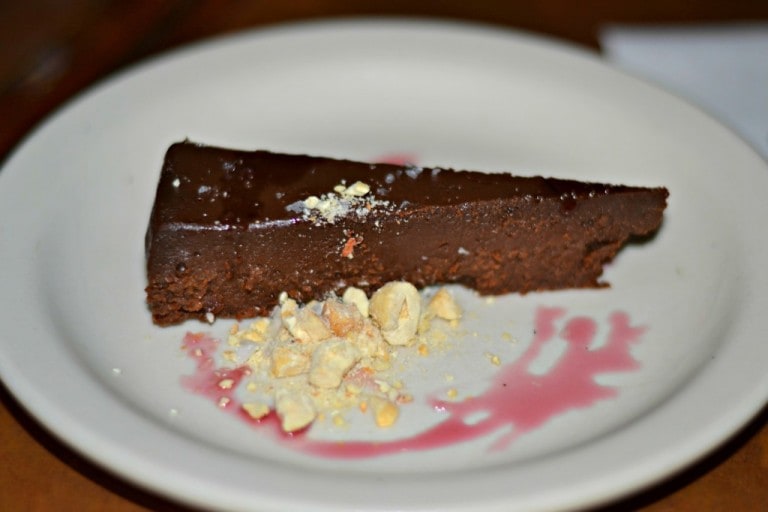 There are literally hundreds of independent restaurants in Ashevile that you are not going to find anywhere else. When you visit, I am sure that you would enjoy the six that I visited. You can learn even more about the dining scene in Asheville by visiting Explore Asheville by clicking here.

What is your favorite independent restaurant?

*I must credit the CVB for providing the information about the creations, restaurants, and the owners/chefs. After eating so many incredible dishes and enjoying time with other food bloggers, it was impossible for me to remember everything. 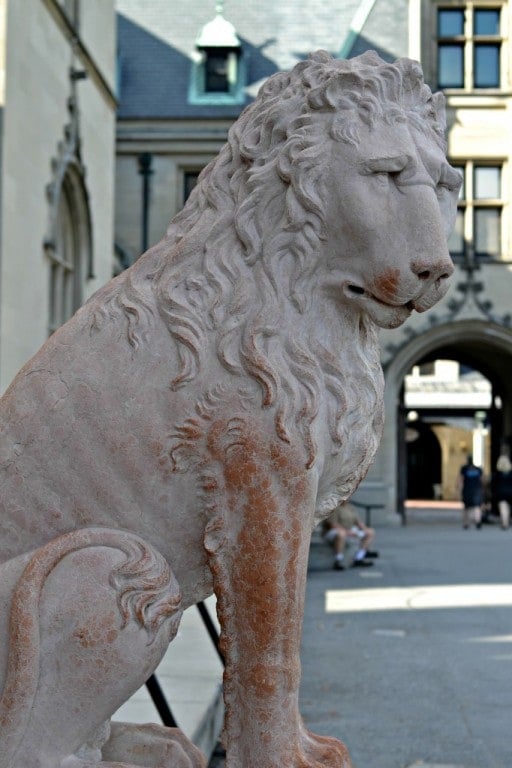 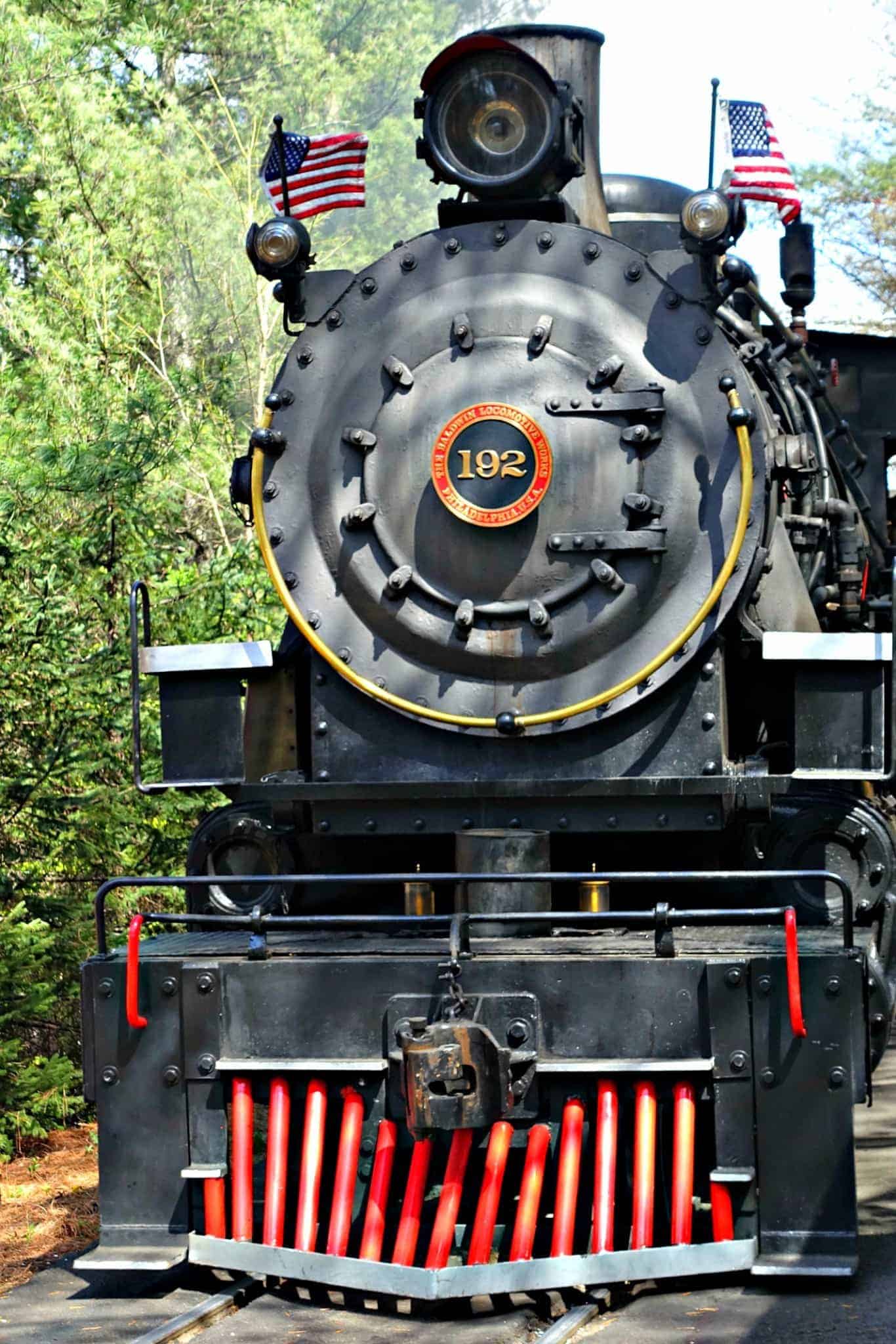 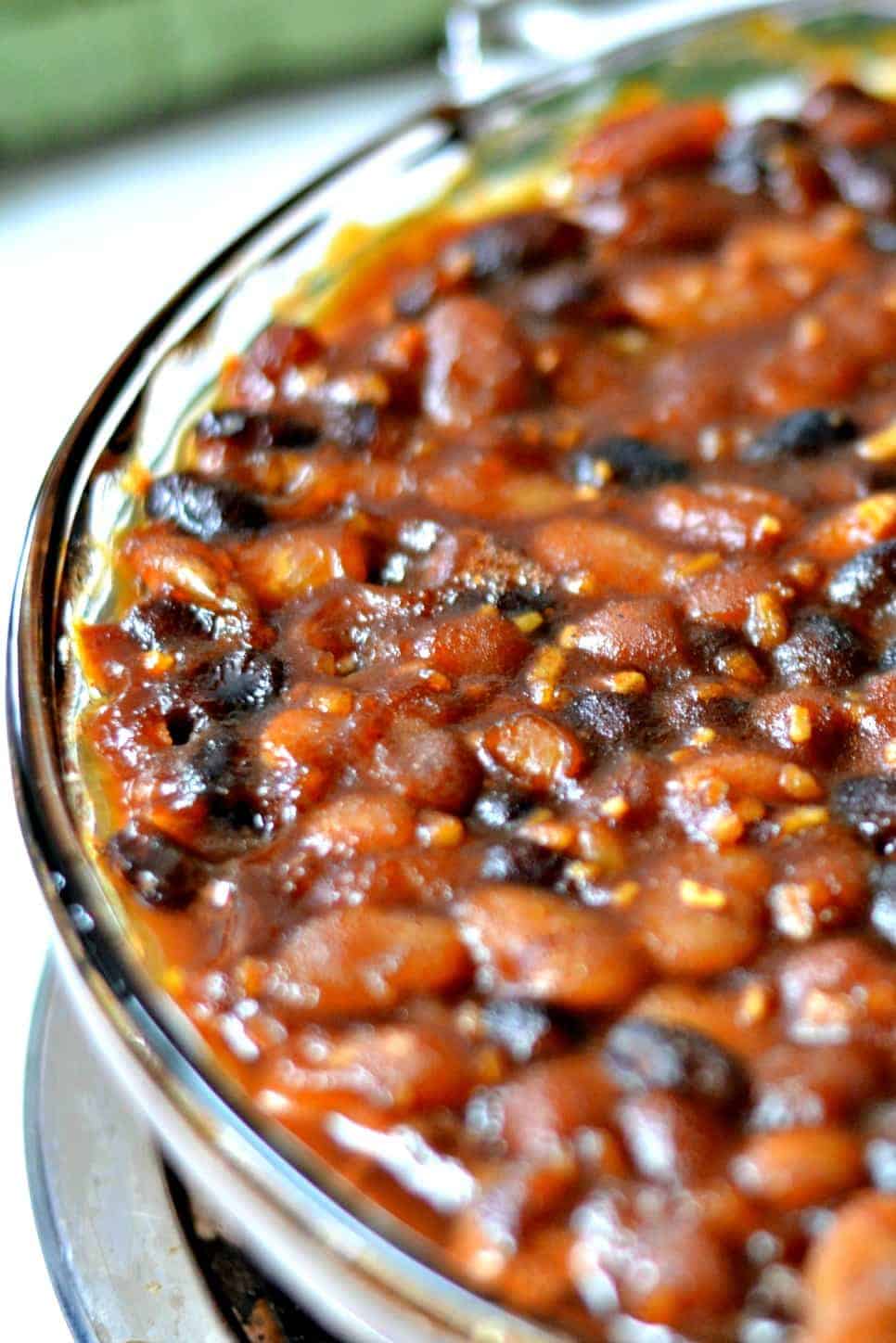 Ohmy gosh, EVERYTHING looks to good at Rhubarbs! Totally craving it now.

Wow that all looks amazing. I feel like getting on a plane right now so I can go try all of that amazing food.

These sound like great places to eat at, too bad we live so far away! :(

All that food looks so good. What were the pies that you left with at the beginning of your tour? Those look delicious.

I think they were apple. It was ALL good.