Nine Things To Do In Pittsburgh

Pittsburgh is a city that is rich in culture, history, and fun things to do.  With so many things to explore, here is a list of nine things to do in the ‘Burgh to get you started.   It’s no wonder so many people #LovePGH.

1. Visit the Suburb of Oakland 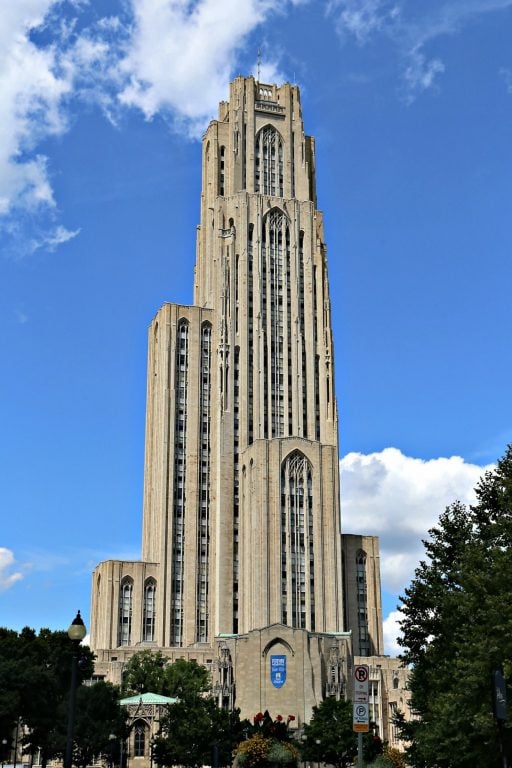 There are 90 neighborhoods in Pittsburgh, each with its own charm. I had a brief chance to explore Oakland and instantly fell in love.  (I know that I use the word “love” a lot when describing Pittsburgh.  I can’t help it – I really am enamored with the city!)  It’s the academic and healthcare center of Pittsburgh and it’s absolutely beautiful. 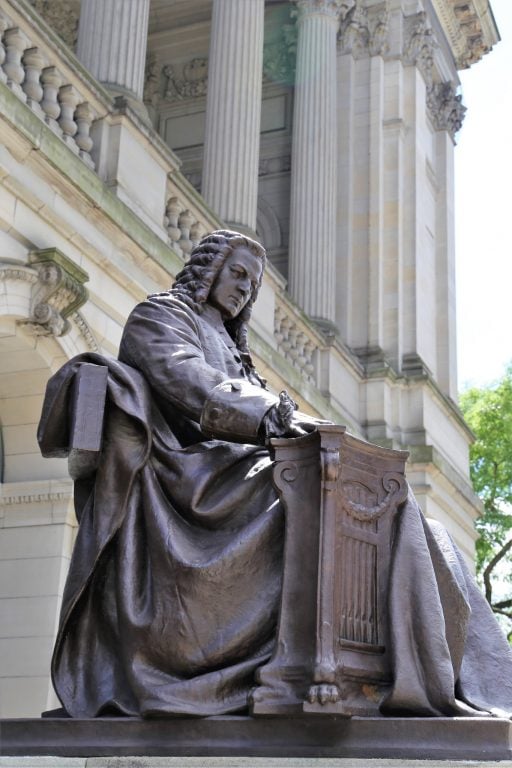 The University of Pittsburgh and Carnegie Melon both are located in Oakland.  With all of those university students, it’s a vibrant part of the city filled with inquisitive minds. 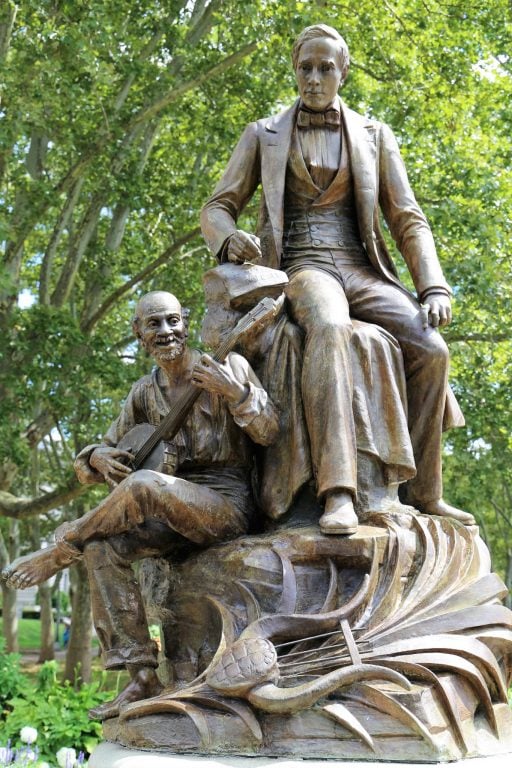 Did you know that the writer of “Camptown Races,” “Oh! Susanna,” “Camptown Races,” “Old Folks at Home (Way Down Upon the Swanee River),” “My Old Kentucky Home,” and “Beautiful Dreamer” was not from the South but a Pennsylvania native?  Stephen Foster was born in Pittsburgh on July 4, 1826.  A museum in his honor is located on the University of Pittsburgh campus. 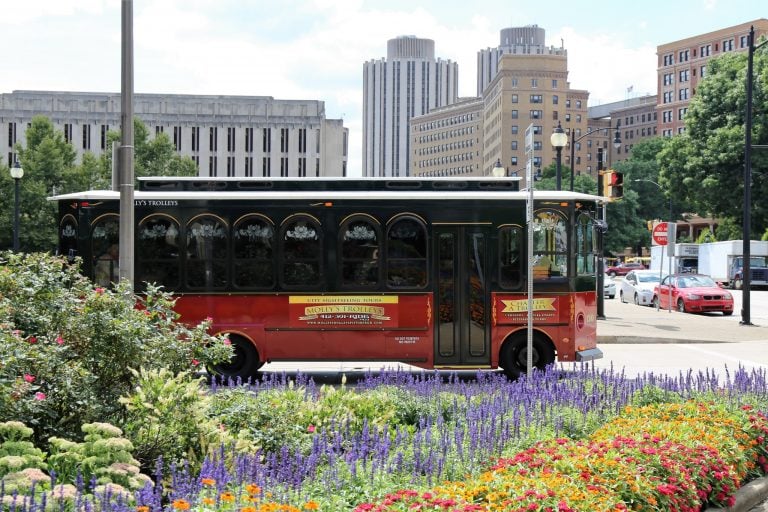 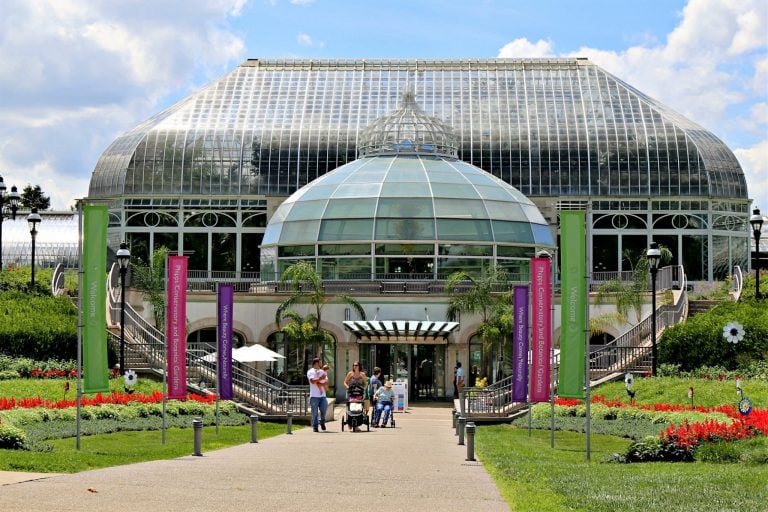 The beautiful steel and glass Victorian greenhouse known as Phipps Conservatory was built in 1893.  It’s considered the architectural centerpiece of the Oakland neighborhood. 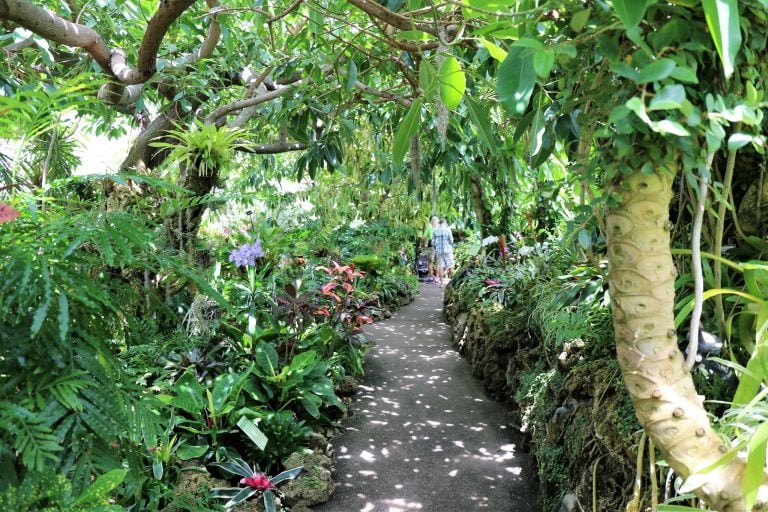 Thankfully it is not necessary to have a green thumb in order to appreciate the beautiful plants that are carefully tended there. 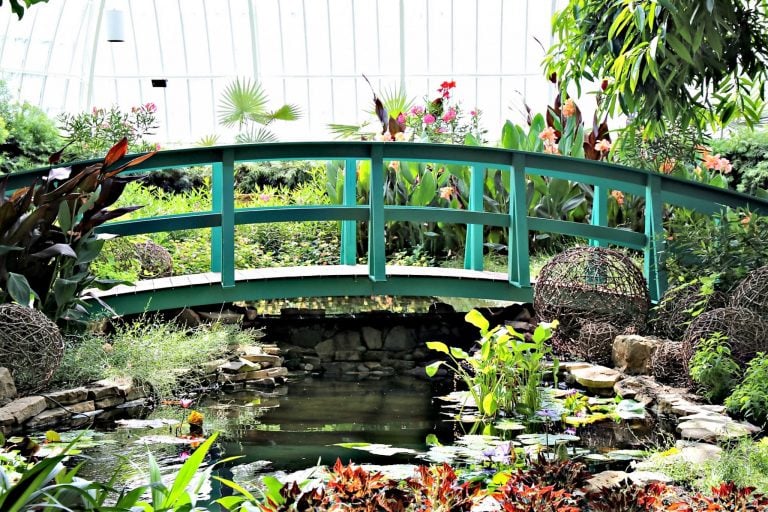 Before you go, be sure to check out the Phipp’s website and reading up on some of the art installations around the facility.  (If you have children with you, you could create a scavenger hunt to see who can find the most displays.)

3. See the City via Segway Pittsburgh 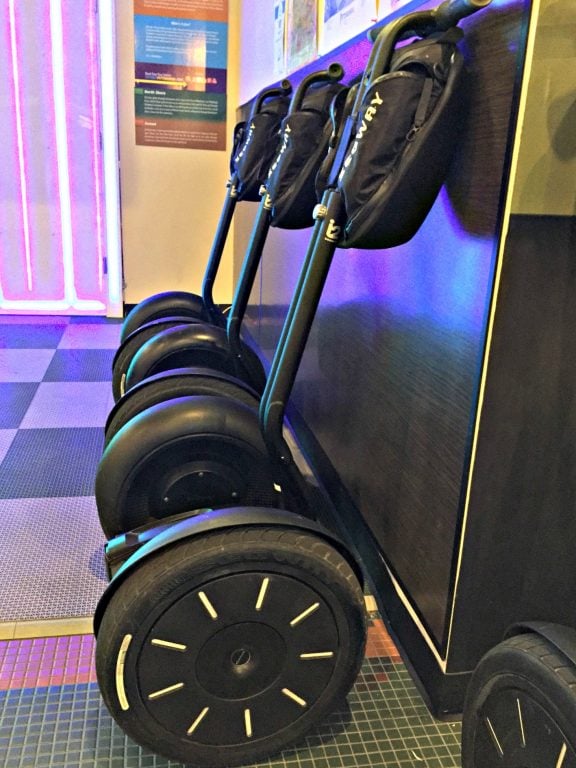 My daughter and I booked a City Lights Tour with Segway Pittsburgh and rode throughout the city.  We could not have had better timing – the Pirates were playing, the Pittsburgh Three Rivers Regatta was taking place, there were concerts throughout the town, and the weather was absolutely perfect.  We boarded at Station Square and rode across the bridge, through downtown, by the stadium, around the Golden Triangle, and made our way back across the bridge.  Most. Fun. Ever!   Our guide, Alan Harper, did a fantastic job making sure we were all safe and had a good time. 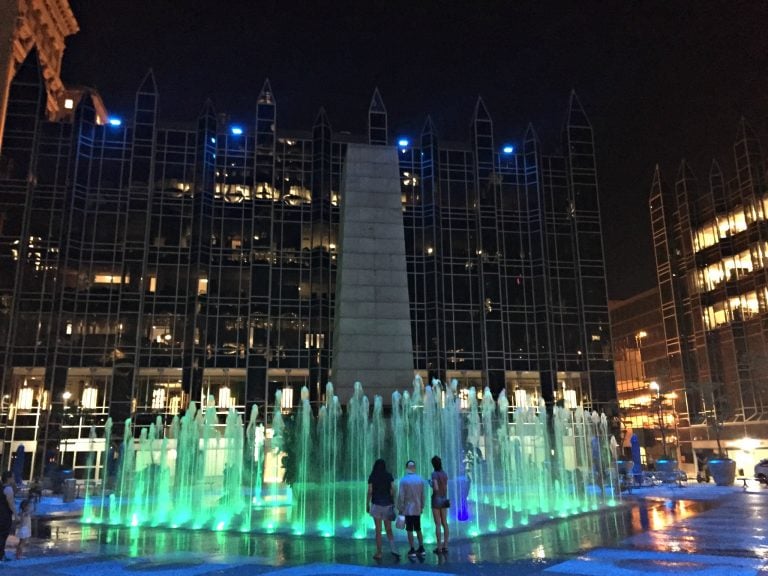 We stopped for a short break downtown near the PPG fountain. 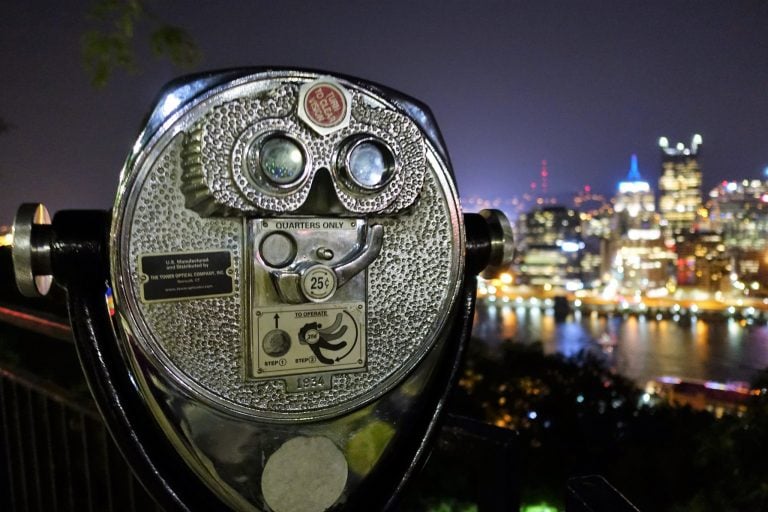 Mt Washington is another one of Pittsburgh’s neighborhoods, but what makes this one extra special is the spectacular views of the city.  After our Segway tour, my daughter and I walked to the Monongahela Incline which is near Station Square.  It only costs a couple of dollars to ride the historic incline each way.

At the top, we stopped and took in the city while it was illuminated. 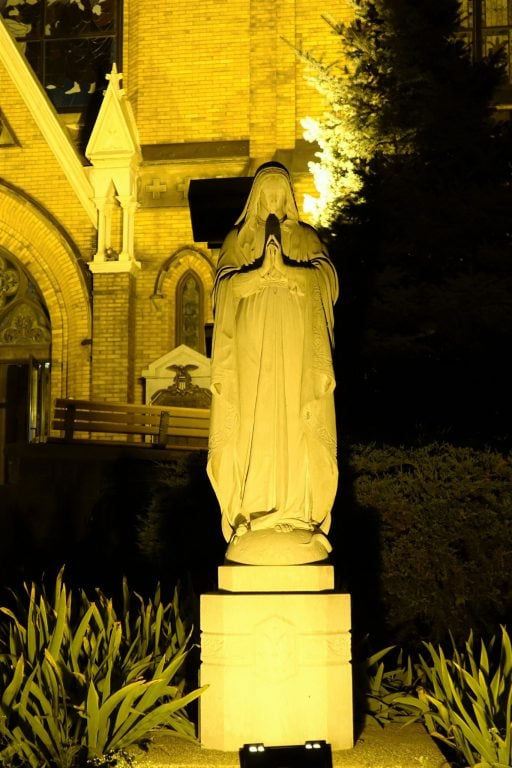 We then walked over to see the beautiful church, Saint Mary of the Mount. 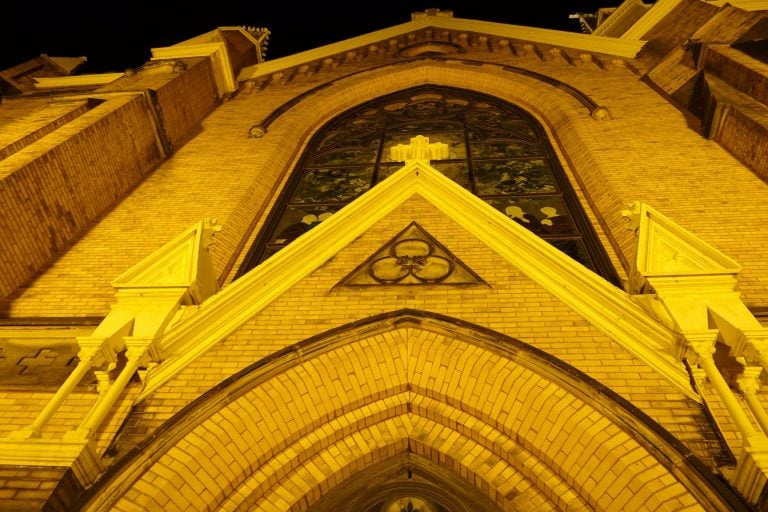 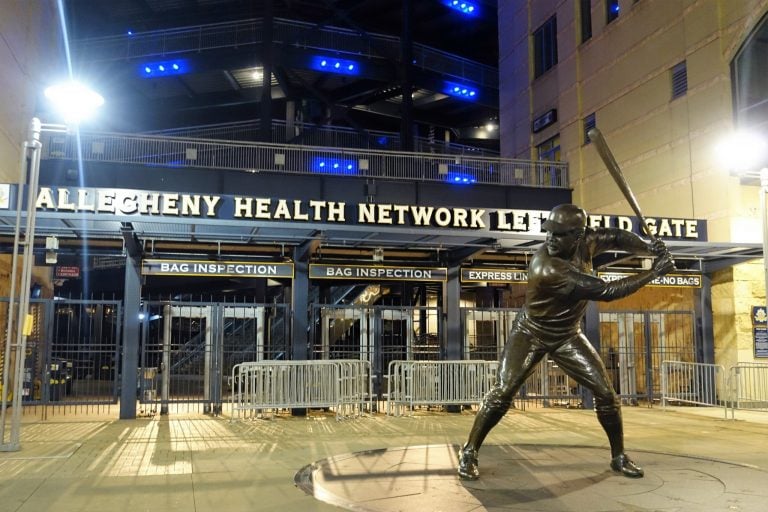 Two Pirates games took place while we were in the ‘Burgh, but unfortunately we did not have a chance to attend one.  (All the more reason to return, right?)  They beat the Cincinnati Reds both nights and we got to see the fireworks announcing the wins – way to go Pirates! 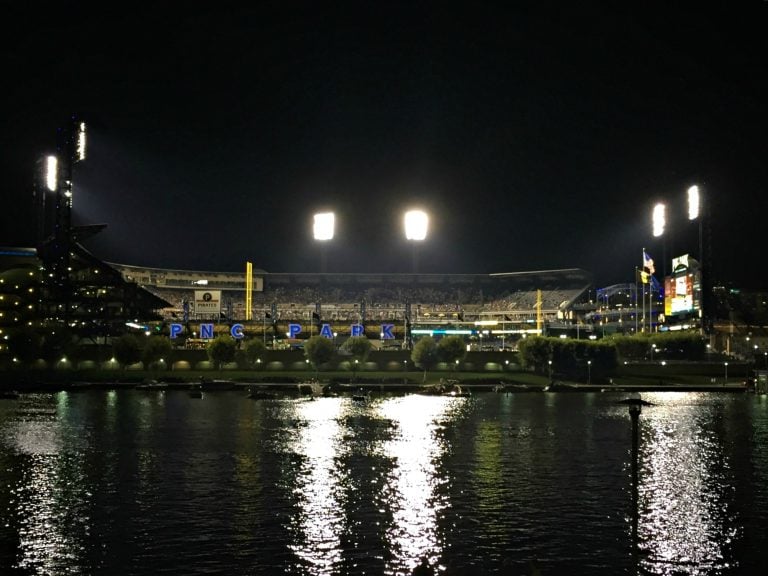 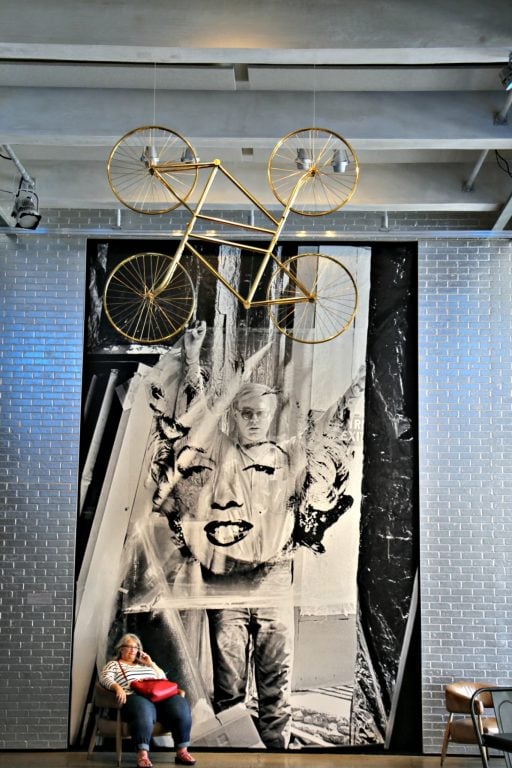 Did you know that Andy Warhol was a Pittsburgh native?  If you visit his namesake museum, you’d know.  There are facts about his life throughout the Andy Warhol Museum, such as the fact that his father emigrated to the US in 1914 and his mother joined him in 1921.  Andrew Warhola (aka Andy) was born on August 6, 1928 and grew up in the Oakland neighborhood.  He attended free art classes at Carnegie Institute and was greatly influenced and encouraged by his mother. 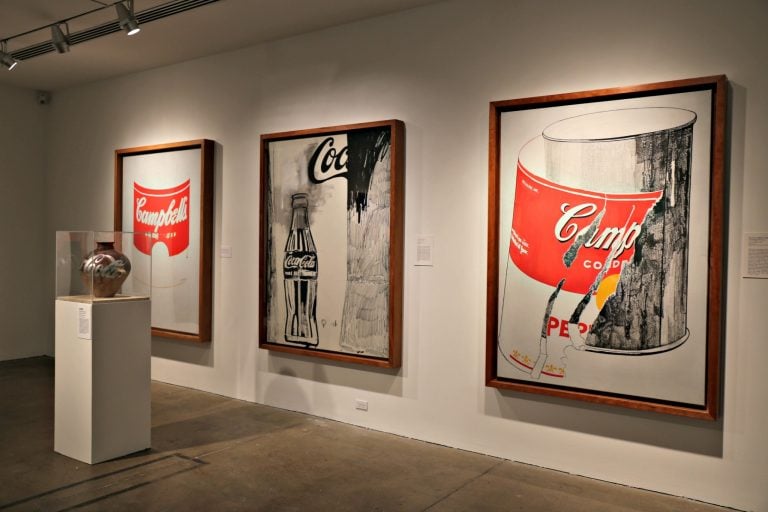 The iconic Campbell’s Tomato Soup can. 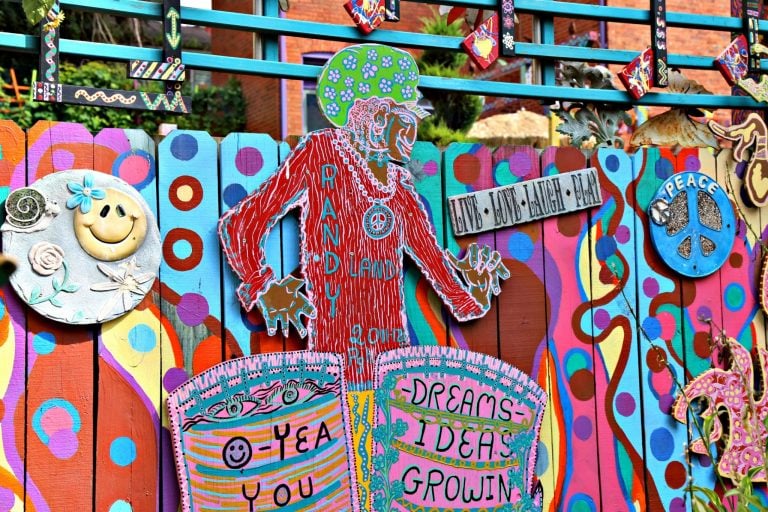 Despite how it may sound, Randyland is not an amusement park. Rather, it is the home of artist Randy Gilson.   It is located in the Mexican War Streets district in Northside (another one of Pittsburgh’s neighborhoods). 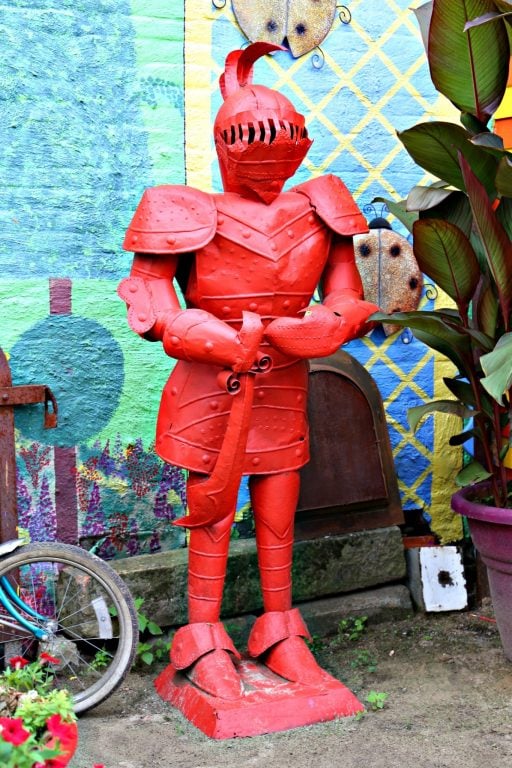 Randyland is quirkly place full of fun, vibrant art throughout.  I have heard that Randy has a big heart that is full of love and it is free to visit.  So we did!  Randy wasn’t there, but we did get to check out some of his unique artwork. 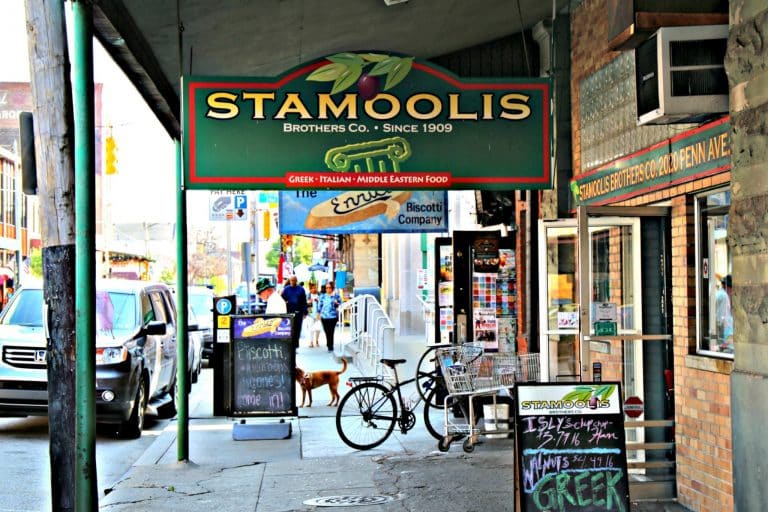 If you read my post on Good Eats in the ‘Burgh, then you already saw some of the good food that I had in the Strip District.  (If you didn’t see the post, click here to go ahead and take a look at it now.)  Doesn’t that food look delicious?!

There’s more to the Strip District than just food.  There are plenty of stores to find black and Aztec gold merchandise for showing Pittsburgh (Pirate, Penguins, Steelers) pride.  Sadly, I left without any souvenirs…so that’s another reason to return to Pittsburgh. 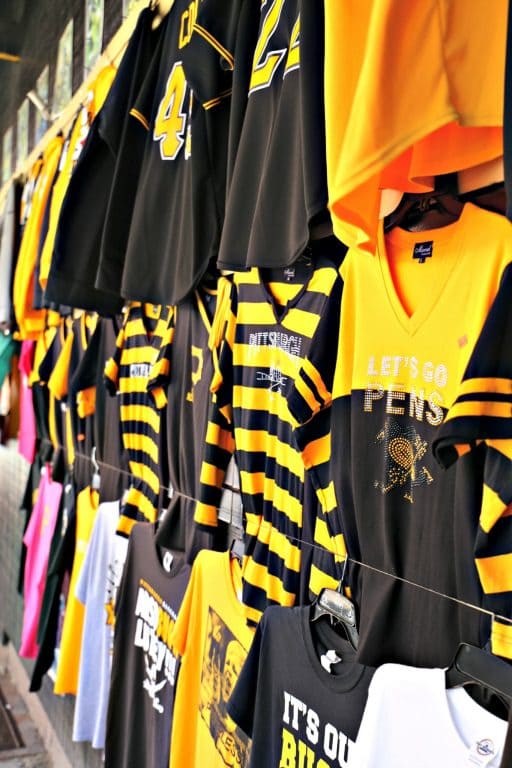 9. Learn at the Heinz History Center 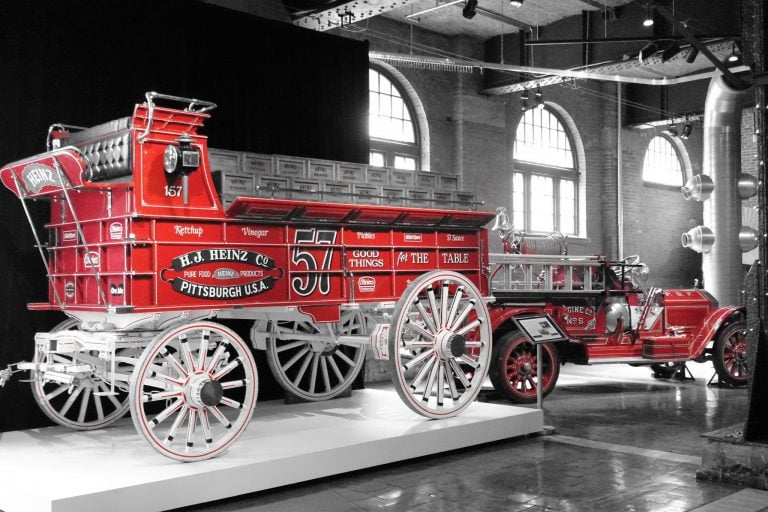 The Heinz History Center, named after Pittsburgh native Senator John Heinz, is located in the Strip District.  It is Pennsylvania’s largest history museum and is an affiliate of the Smithsonian Institute.  The 370,000 square foot facility is full of artifacts and stories of America’s history that have a western Pennsylvania connection.  I was surprised at how much Pittsburgh’s history affected all of the United States.

For me, the visit to the museum was a bit emotional – I was able to view a family file (I have Pennsylvania connections!) that is housed at the history center. 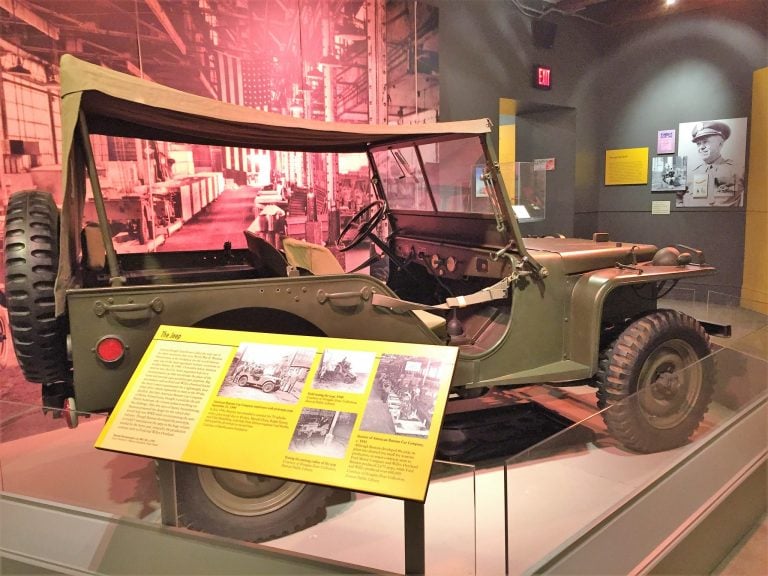 Did you know that the Jeep was invented in Pittsburgh?

Those are just some of the awesome things to do in Pittsburgh.  What’s your favorite thing to do in the ‘Burgh?

For more information about Pittsburgh, go to https://www.visitpittsburgh.com/.  If you’re looking for where to eat in Pittsburgh, be sure to read Eight Places To Eat Only In Pittsburgh. 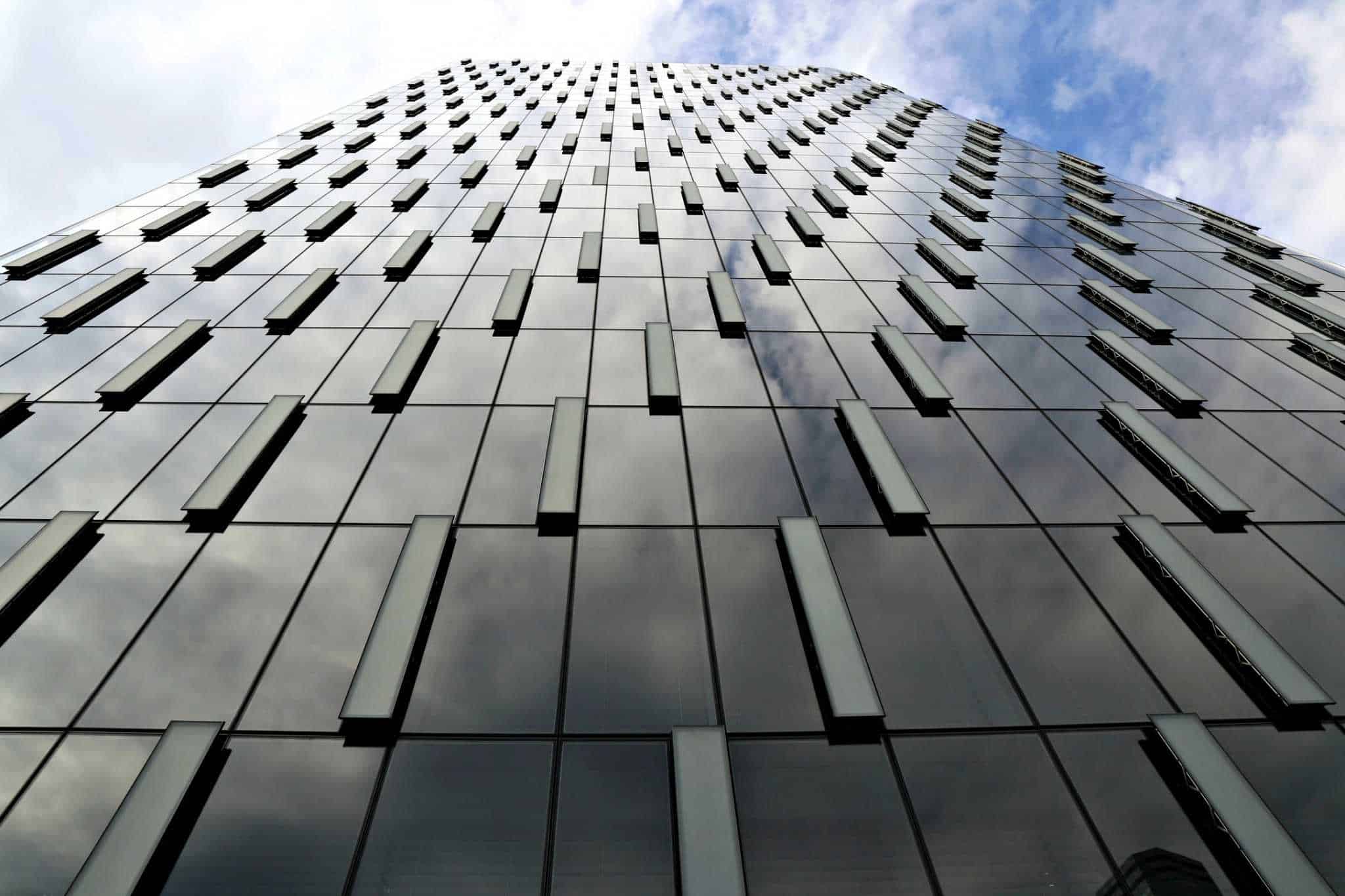 Previous
Pittsburgh's Past, Present, and Future 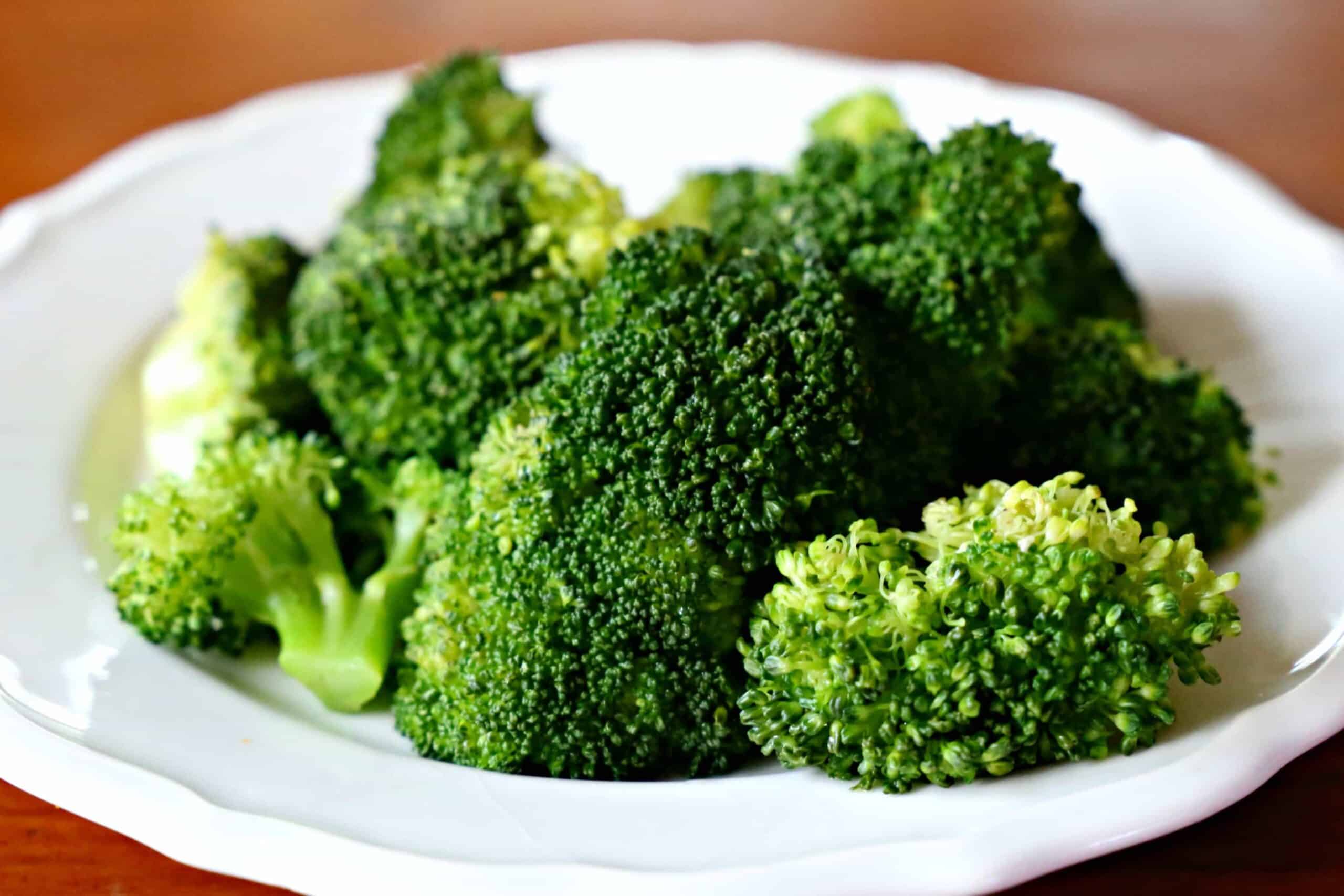 Next
How to Steam Broccoli in a Rice Cooker
Click here to cancel reply.

Stephen Foster statue will be torn down next month because its "racist".

Great post! Loved reading an seeing all the pics of Pittsburgh! It was so nice meeting you the other night at the Local Taco event! Hope to see you at many more events!!

Thanks for stopping by, James and Stephanie. It was really nice meeting the two of you. Wasn't that food delicious?!