This recipe for Peanut Butter and Chocolate Chip Ice Cream is so good you’ll be surprised that it is dairy-free and vegan! Don’t let the word vegan scare you. Vegan is not a four-letter word.  It’s five. And this ice cream is totally delicious!

For this amazing vegan nice cream, you need the following ingredients:

To make it, pull out your blender and combine the coconut milk, peanut butter, agave syrup, arrowroot powder, grapeseed oil, almond extract, and salt.  Blend until it is smooth and then chill the mixture for 1 hour

Next, place the mixture in your ice cream maker and follow the manufacturer’s instructions.

Place a sheet of parchment paper over the nice cream to prevent contact with air (and thus reduce freezer burn). Cover and freeze at least 3 to 4 hours before serving. You may have to let it thaw for about 5 minutes before scooping. 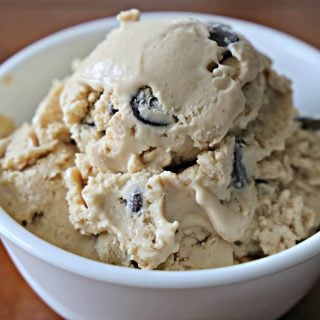 ***Recipe from But I Could Never Go Vegan!: 125 Recipes That Prove You Can Live Without Cheese, It’s Not All Rabbit Food, and Your Friends Will Still Come Over Dinner, copyright © Kristy Turner, 2014. Reprinted by permission of the publisher, The Experiment. Available wherever books are sold.

In my quest to taking charge of my health, I started exploring the world of veganism.  Never in a million years did I think that I would even consider it.  I mean, why in the world would someone want to voluntarily give up eating Chick-Fil-A chicken sandwiches?  Or nuggets?  Or Five Guys burgers?

People have different reasons for following a vegan diet, typically either out of compassion for animals or for health purposes.  After reading How Not To Die by Michael Greger, MD, I decided to try cutting out meat for health reasons.  But that’s another story for another day.

So… In my search for vegan cookbooks on Amazon.com, I came across But I Could Never Go Vegan

by Kristy Turner.  She is the wit and humor behind the blog called Keepin’ It Kind.

Kristy’s book addresses all of the excuses that there are for not going vegan, such as “All those special ingredients are more expensive,” “I could never give up cheese!,” “Just thinking about salad makes me yawn,” and about a dozen others.

Kristi was not raised a vegan.  In fact, prior to becoming a vegan, she worked as a fromagier (think cheese expert).  After watching a video about what happens on farms and doing some research, she told her husband that she needed to go vegan.  He agreed that they should try it.  Long story short…Kristi shares recipes, tips, and trips on her blog, plus has had her cookbook featuring 125 recipes for food that is delicious and kind to animals published.

I felt like I was hanging out with the cool girl at school when I read the blurbs that accompany each recipe.  And that the cool girl was my friend.  She writes in a manner that is casual and humorous and will have you seeing that vegans are real people.

Being that I love chocolate, the first recipe I tried from the book was for Chocolate Chip Brownies.  They came out beautiful, don’t you think?  However, I discovered in the process that I don’t like Earth Balance Buttery Spread.  It was just too “earthy” for my taste.  That being said, I will try the recipe again, substituting another brand or coconut oil for the vegan butter.

The next recipe I tried was Jackfruit Nacho Supreme.  I wasn’t able to fully follow the recipe because I had a hard time finding canned Jackfruit.  However, I did find a BBQ version in the refrigerated section at Sprouts.  While the texture was good, I didn’t care for the already prepared sauce of the prepackaged BBQ “meat.”  The dish was a refreshing take on one of my favorite Mexican dishes.

Now, for the promised recipe, courtesy of But I Could Never Go Vegan:

On this health journey of mine, I have greatly cut back on the amount of animal protein that I consume and feel good about it.  I think so many people will benefit by consuming a plant-based, plant-based diet.  That’s one of the many benefits of going vegan – all of the dishes are plant-based.  At this point, I consider myself vegan at heart.

If you are considering following a vegan diet, visit KeepinItKind.com.  Also, look for Kristy’s book, But I Could Never Go Vegan at your local bookstore or at Amazon.com.  More delicious vegan recipes from Kristy will be available on November 15th when her new cookbook, But My Family Would Never Eat Vegan! is released.

What is your favorite meatless meal?

If peanut butter isn’t your jam, then check head over to Keeping the Peas and check out the recipe for Vegan Strawberry Ice Cream.