This Loaded BBQ Chicken Pizza Recipe just might change the way you make pizza from now own. (It’s made using a packet of Idaho Spuds.)

In honor of football playoffs, I created a new recipe that’s full of big flavor. You and your guests might even be surprised that this delicious Loaded BBQ Chicken Baked Potato PIZZA recipe was made using a packet of Idaho Spuds. Yes, that’s right – mashed potatoes!

The inspiration behind this recipe comes from a loaded bbq potato that I like to eat at a restaurant in Huntsville. The potatoes are awesome and make a great meal, but just would not be ideal for serving at the big game. So I merged the flavors of my beloved potato into my other great love – pizza.

It really is quite easy to make. Let’s take a quick look at how to make it.

For this easy pizza recipe, you need the following ingredients:

To make the crust, you start by pouring 1 ½ cups warm water into a measuring cup. Add yeast and honey, stir, and let it sit for 5 minutes.

Whisk together Idaho Spuds and flour in the bowl of a stand mixer. Add the water mixture and mix at low speed of mixer using dough attachment for 1 minute until the dough becomes a well-formed ball and all flour has been incorporated.

Increase the speed of the mixer to medium and knead for 2 minutes.

Place the pizza dough in a lightly oiled bowl. Roll the dough around to lightly coat the entire surface. Cover it with plastic wrap and place inside the pre-warmed oven to rise for 30 minutes.

Remove bowl from oven and preheat the oven to 450 degrees.

Divide the pizza dough in half and roll it out on pizza pans or baking sheets that have been sprinkled with flour. Prick the surface with a fork to allow steam to escape.

Partially bake it (for about 7 minutes) and then remove it from the oven and top it with your favorite bbq sauce and toppings.

Bake for about another 7 minutes and touchdown! You now have a delicious pizza ready to serve hungry fans. 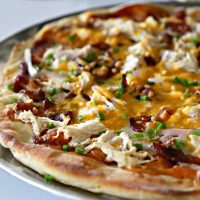 Notice that I didn’t put how much bbq sauce or how much cheese to use. That’s because some people like a lot of sauce and some like a lot of cheese. I recommend that you start with a small amount of sauce (about ½ cup for a large pizza) and spread it around. If it doesn’t look like enough, you can add more.

I typically use 2 cups of cheese (1 – 8 ounce package) for a really large pizza or for 2 medium-sized pizzas. For Loaded BBQ Chicken Baked Potato PIZZA, I like to mix things up and use a combination of cheddar cheese and mozzarella cheese. Be flexible and make it your own.

I was selected for this opportunity as a member of Clever Girls and the content and opinions expressed here are all my own.

Like pizza? Don’t miss these other recipes at Southern Kissed: