Strawberry Shortcake is a classic recipe that will bring a smile to everyone’s face. This recipe from King Arthur Flour is a crowd pleaser, with a freshly made biscuit, fresh strawberries, and topped with whipping cream. This recipe is easy to make and sure to be a hit at your next family gathering or special occasion.

Though shortcakes are traditionally made by adding shortening or butter to a dough, King Arthur Flour’s version, shown below, is made using heavy whipping cream which makes them all the more decadent, in my opinion. (And hey – butter comes from heavy whipping cream anyway, so in a way, it is like they are made with butter. Agree?)

I have been using King Arthur Flour (KAF) for years of the quality ingredients. (Here is a post from a couple of years ago for Southern Biscuits – one of the top Southern Kissed posts.)

One of the things I want in my flour is for it to be unbleached. I like to keep my ingredients as simple as possible. King Arthur’s Self-Rising Flour is unbleached. Not only that, the leavener in it to make it self-rising is aluminum-free baking powder – another big bonus for using King Arthur flour.

I was recently joined King Arthur Flour’s campaign for #BetterBiscuits. I was happy to do so knowing that I would be using KAF. Instead of making the traditional biscuit, I opted to try King Arthur’s Self-Rising Cream Biscuits for Shortcake.

Let’s look at how to make this sweet treat.

I took 2 cups of King Arthur Unbleached Self-Rising Flour and combined it in a bowl with 2 tablespoons of sugar.

To that, I added 1 cup of heavy cream into which I had added 1 teaspoon of vanilla. I stirred until all of the flour was moistened, then I started kneading the dough. I patted it out into a circle and brushed it with some more heavy cream (the original recipe calls for melted butter – I sometimes stray) and sprinkled it with some sugar.

Using a biscuit cutter, I cut the dough and placed the biscuits on my baking stone and baked them for about 12 minutes.

I removed them from the oven and let them cool. Then I sliced them and placed a small layer of whipped cream on the bottom biscuit, added some sliced strawberries, and re-placed the top. 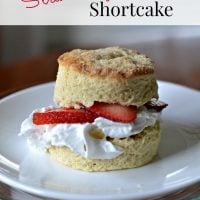