Is it worth waiting in line for an hour to get Nashville Hot Chicken at Hattie B’s? The answer might surprise you. 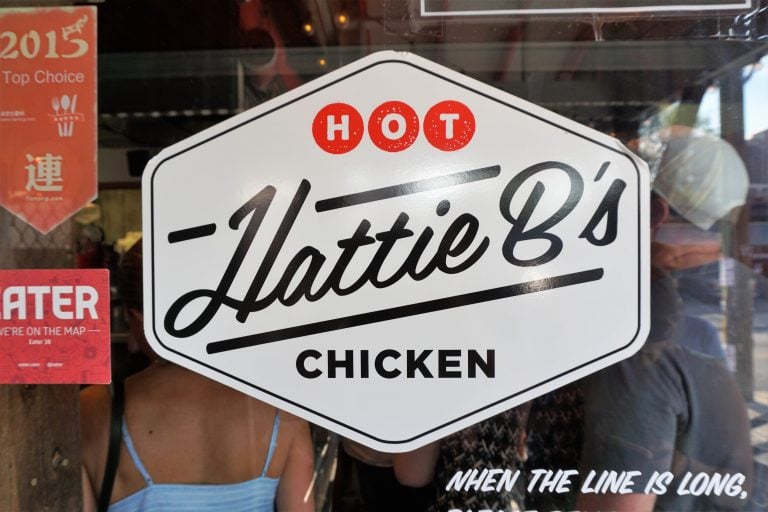 On a recent layover of sorts in Nashville with several hours and a hungry belly to fill, my friend Jennifer from Sweet T Makes Three and I made our way to Hattie B’s.  The decision was made while we were deplaning at BNA and we asked some guys about where to eat.  They both responded with Hattie B’s and smiled. 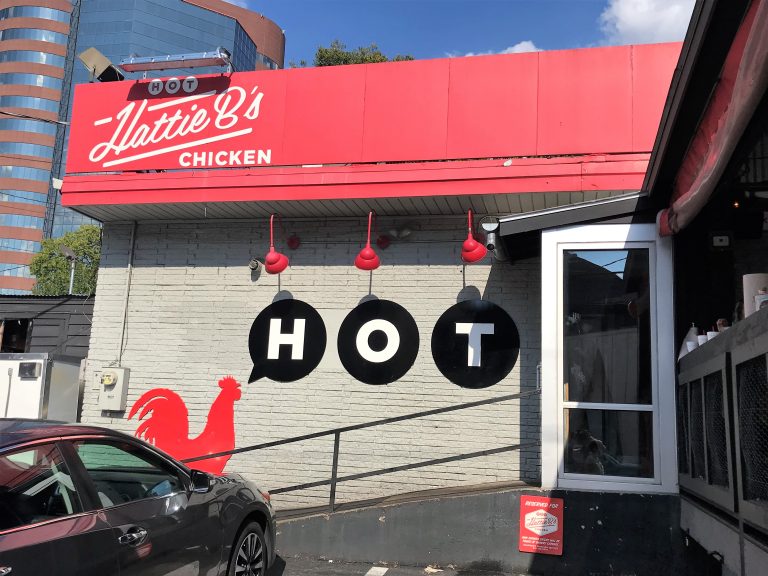 We were in Nashville on a Saturday, so it only took us about 20 minutes to get to Hattie B’s from the airport.  We came in on Broadway and saw the sign.  We parked in the parking lot behind Hattie B’s/Gigi’s Cupcakes.

My first inclination was that it was Saturday and we wouldn’t have to pay for parking.  We proceeded to the entrance of Hattie B’s and discovered that the wait time was approximately an hour. 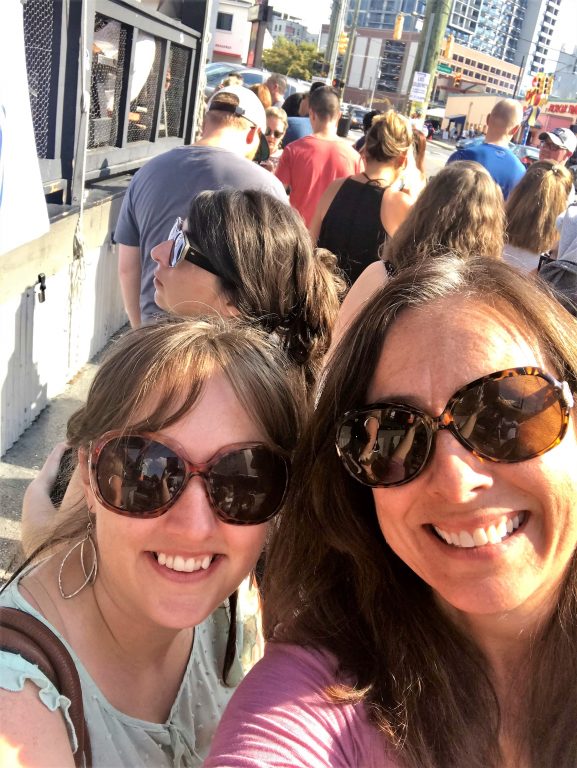 Fortunately, I thought better and decided to go check out the parking situation.  I stood in line to pay while the parking attendant came to the lot.  On a Saturday.  I told her I was in line to pay and narrowly escaped getting a boot on my car.  (Tip:  Be sure to pay for parking!  The $18 fee is cheaper and less hassle than a boot and up to a $50 fine.) 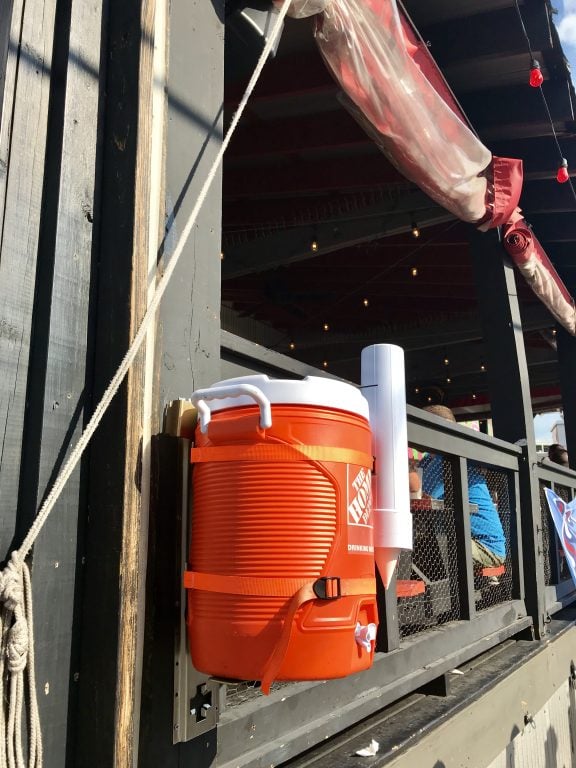 Even in October, it gets hot in Nashville.  Super hot.  There were two bright orange coolers with cups outside of the restaurant to keep soon-to-be patrons hydrated. 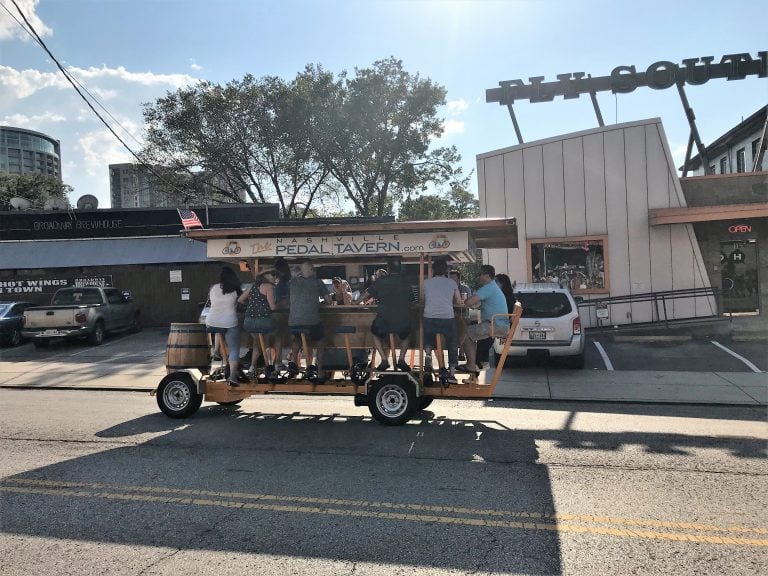 One benefit of waiting is that you can do some people watching in Nashville.  We saw several of these Nashville Pedal Tavern‘s go by us while we waited. 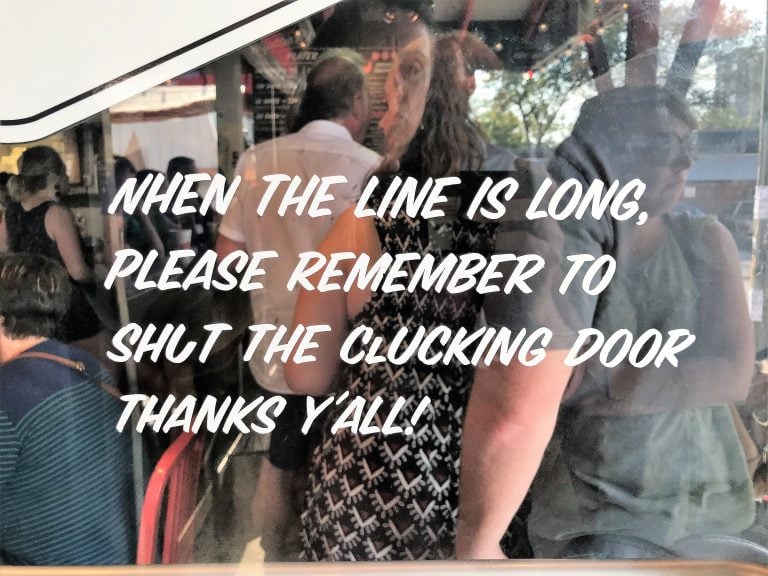 One thing you will notice at Hattie B’s from the door to the menu is a little bit of snarkiness via a nod to the restaurant’s star – chicken. 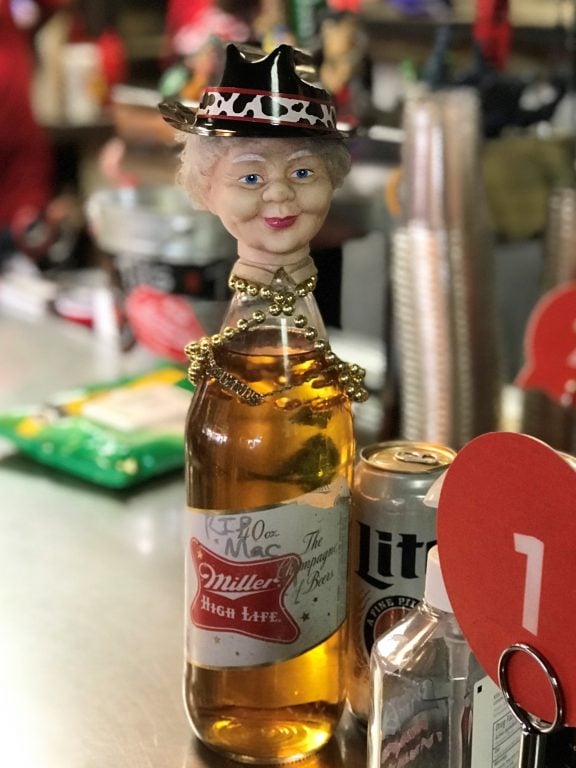 The counter is only a few feet deep into the restaurant, while the line outside snakes its way across the front and down the street.  Once inside, it doesn’t take that long before you can place your order.

The Menu at Hattie B’s

Hattie B’s menu is a refreshing change from the typical chicken joint.  Yes, you can get a plate of chicken with either white meat or dark and you can order chicken tenders, wings, or a sandwich. However, the heat level is up to you – Southern (no heat), Mild (a touch of heat), Medium (warming up), Hot! (feel the heat), Damn hot!! (fire starter), and for those brave souls who dare, Shut the cluck up!!! (burn notice).

We both ordered tenders.  Jennifer was a brave soul and got hers “HOT” while I opted for “Medium.”  For our sides, we both ordered a side of black eyed pea salad and for our other side dish, Jenn ordered the pimento mac & cheese while I got the red skin potato salad. 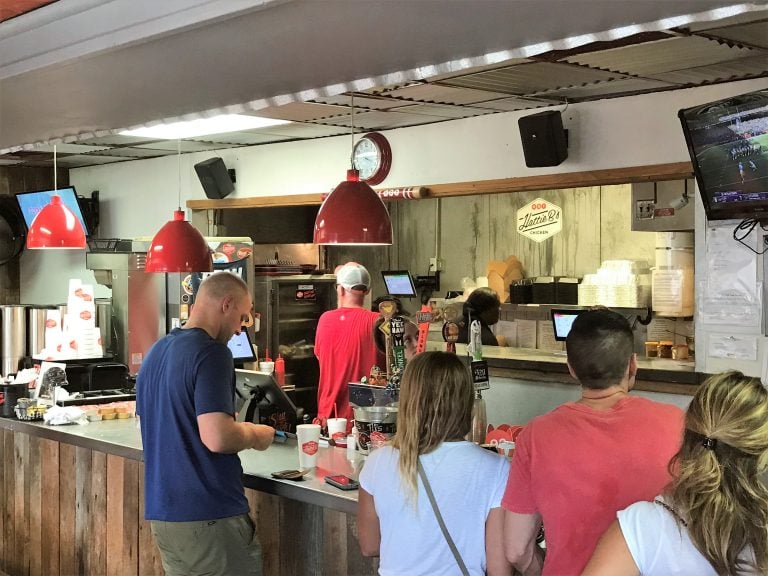 Jennifer and I had not eaten since breakfast when we were in Florida and we were hungry.  By the time we ordered, it was nearly 4 o’clock.

After waiting an hour in line and paying an exorbitant parking fee, I couldn’t help but wonder if it was worth it.  I think subconsciously I was thinking, “Please, Lord.  Let it be worth it!” 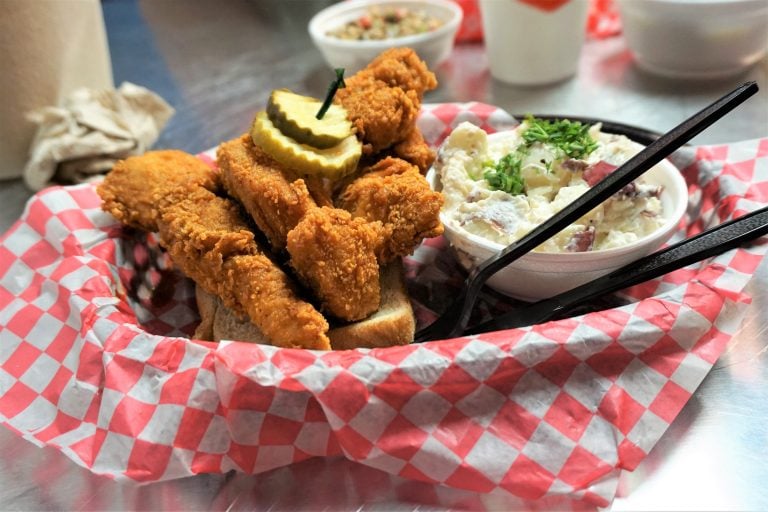 After we ordered and paid, we found a table and sat down.  We placed the number that we were given on our table and waited roughly 10-15 minutes for our food to arrive.

The chicken was hot (temperature-wise) and juicy!  Not only was the chicken good, but the sides were, too.  I would order the same meal again.  And again. 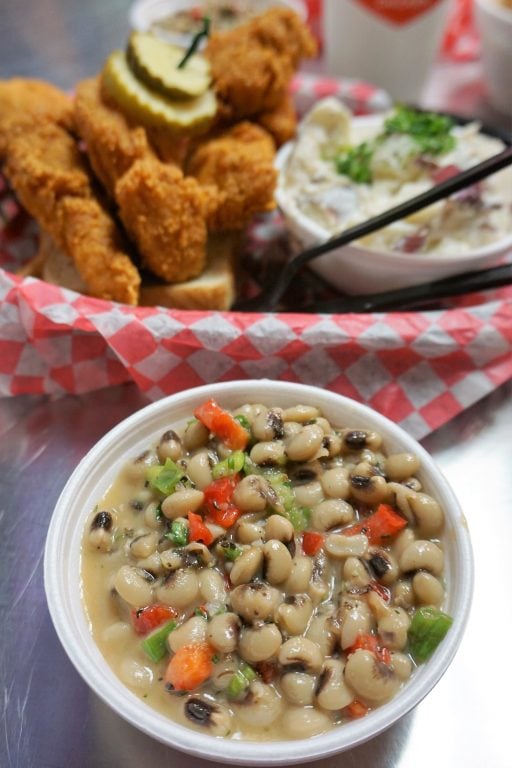 Jennifer also ordered the banana pudding, which came to us with two spoons.  So it was like a sign from above that I HAD to try that, too.  I am happy to report that for only $3, the pudding is worth the splurge. 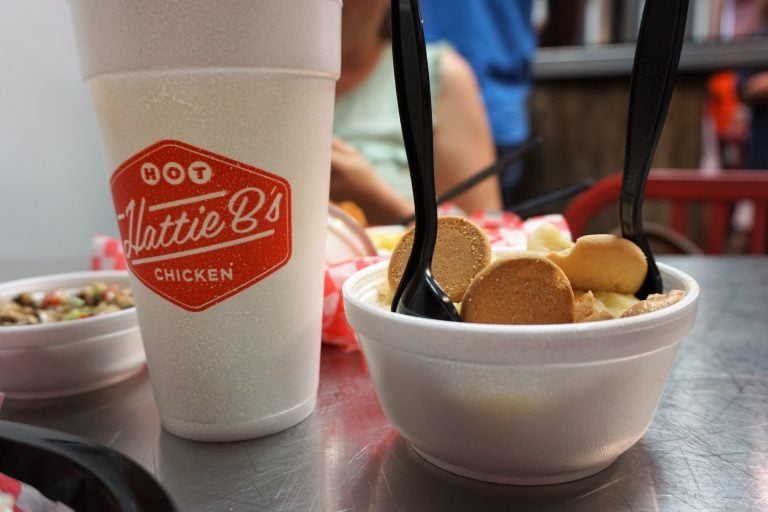 We ate at Hattie B’s the day that Ed Sheeran was going to perform in Nashville.  We suspect that might be why the line was still wrapped around the building after we finished (around 4:30ish). 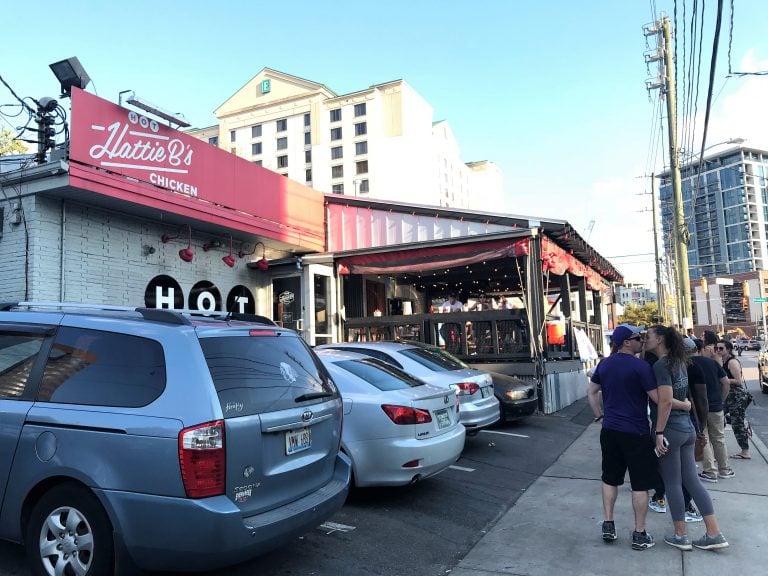 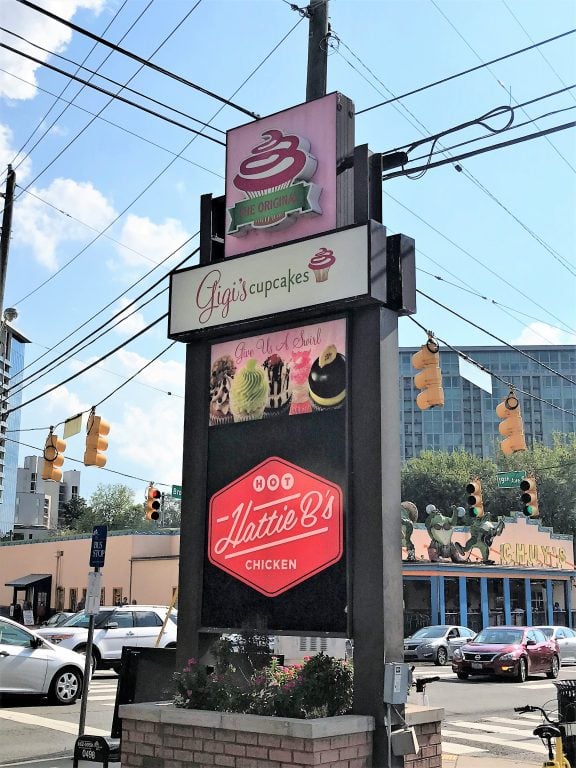 Hattie B’s has been featured on the Food Network, the Travel Channel, and on USA Today.  If you can’t make it to a Hattie B’s location, you can try making it at home thanks to this recipe from the Food Network.

What do you like to eat at Hattie B’s? 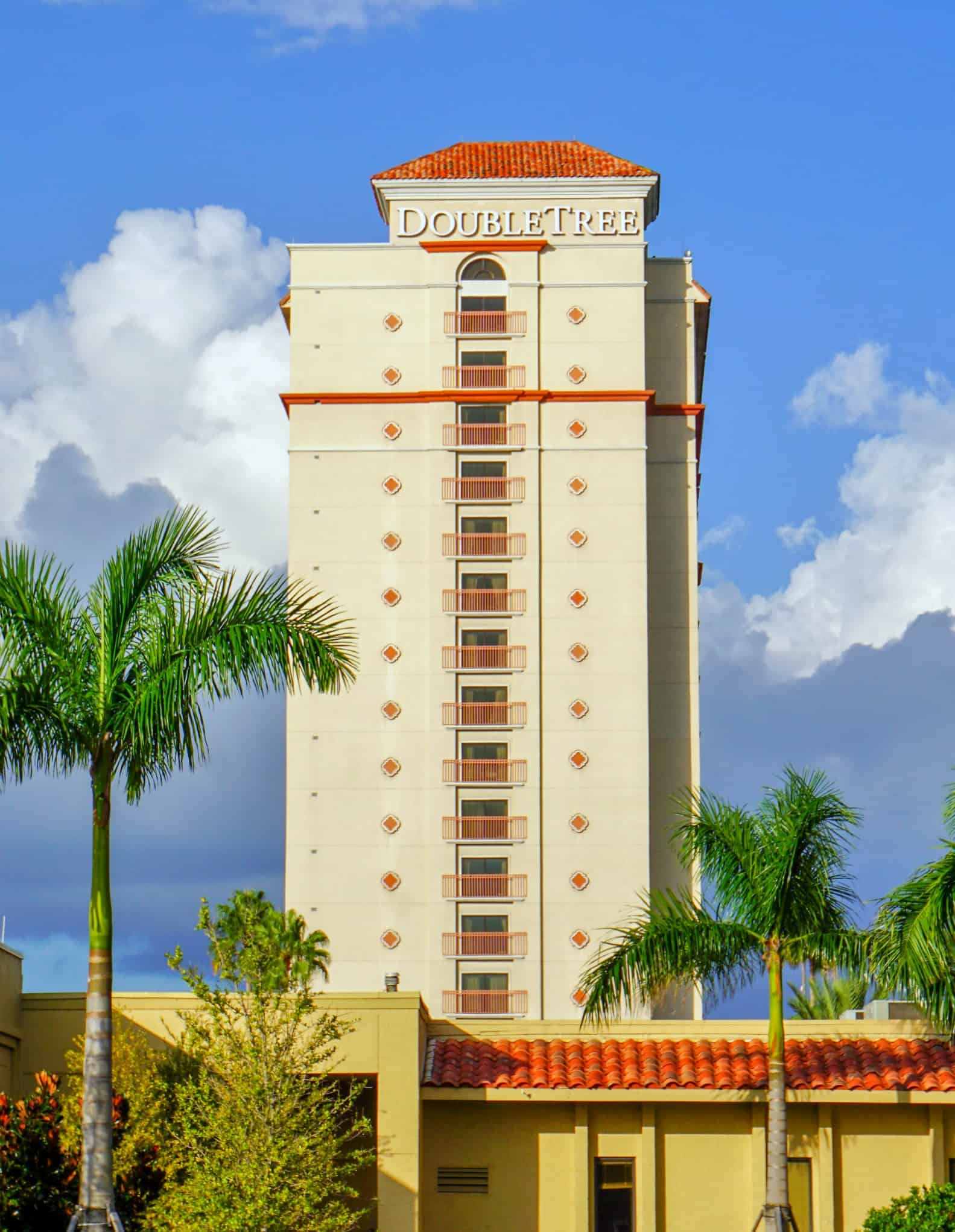 Next
The DoubleTree Resort in Orlando at SeaWorld
Click here to cancel reply.

LOVE me some Hattie B's while in Nashville! HOT chicken is my choice!