Dolly Parton’s Stampede is a great way to enjoy dinner and theater production at the same time. The food and entertainment are outstanding. 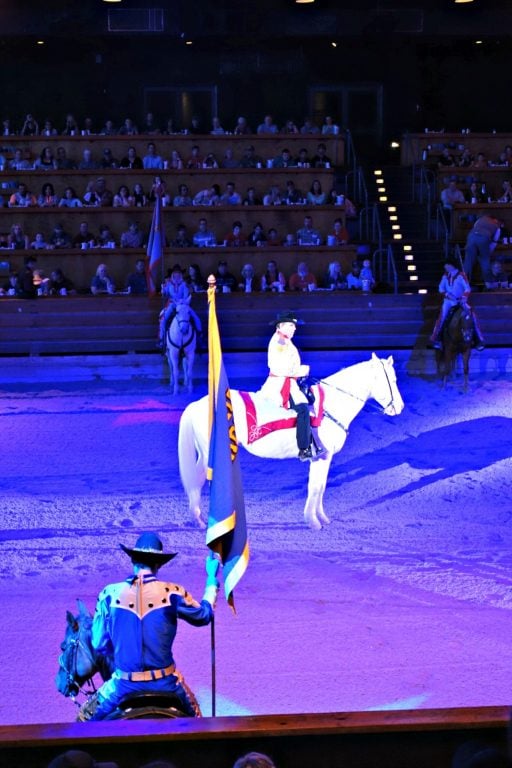 I would be lying if I said I didn’t like dinner theaters.  What’s not to like – you get to eat and be entertained at the same time.  This year I was able to experience Dolly Parton’s Stampede for the first time, and let me tell you – it did not disappoint.  In fact, I was surprised at how much I really did like it.

Let me tell you a little bit about it.  About an hour before the show begins, guests gather in the Dixie Belle Saloon which is adjacent to the Dixie Stampede arena.  There they can order a tasty (non-alcoholic) beverage and listen to bluegrass and country music performed by highly talented artists.  I found it to be fun to join in when the guys started playing Rocky Top – I mean, you just can help but join in, right?

When it’s time for the show to begin, guests make their way to their seats and friendly waitstaff take drink orders (unlimited soda, tea, water, and coffee are included with admission).  Once the show begins, delicious biscuits and creamy vegetable soup are brought out, later followed by a succulent whole chicken. 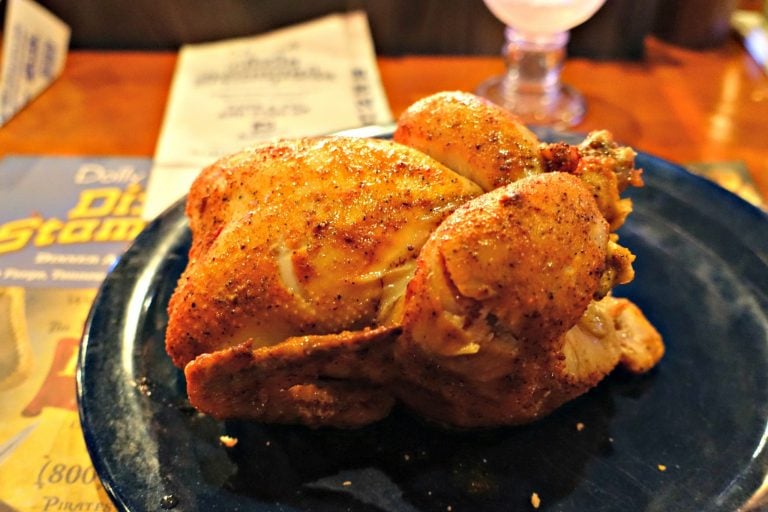 Guests get to dine just like they might have in the early years of our country – with their hands.  (Don’t worry, napkins are provided as well as a nice, warm wipe at the end of the meal.) 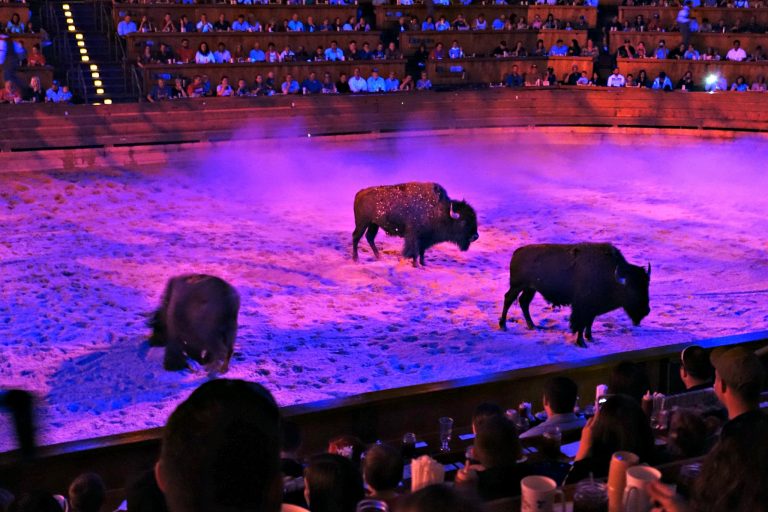 In addition to talented actors and actress, the cast includes trained buffaloes, 32 horses, chickens, and pigs.  One of the special effects is a wall of 12.5 million LED lights which create beautiful backdrops of clouds rolling across mountains, the sun setting over the horizon, and an old southern mansion.  A couple of acts descend from the “sky” and are awesome to watch. 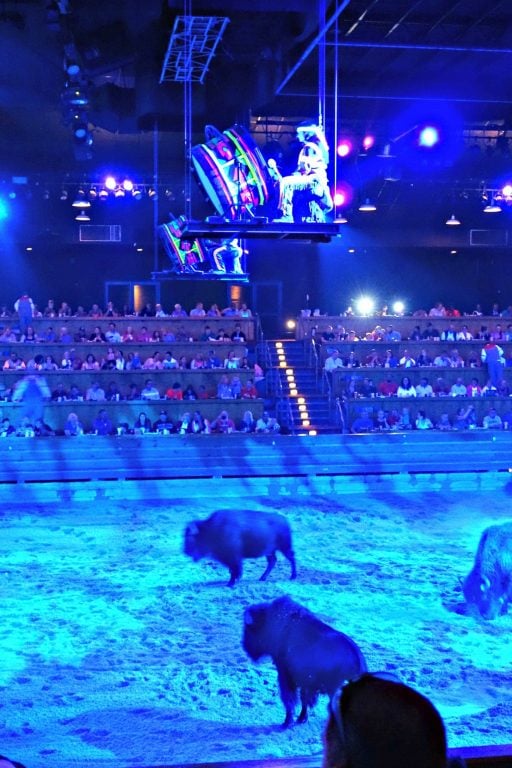 The show includes friendly competitions between the North and South to settle the age-old rivalry once and for all. 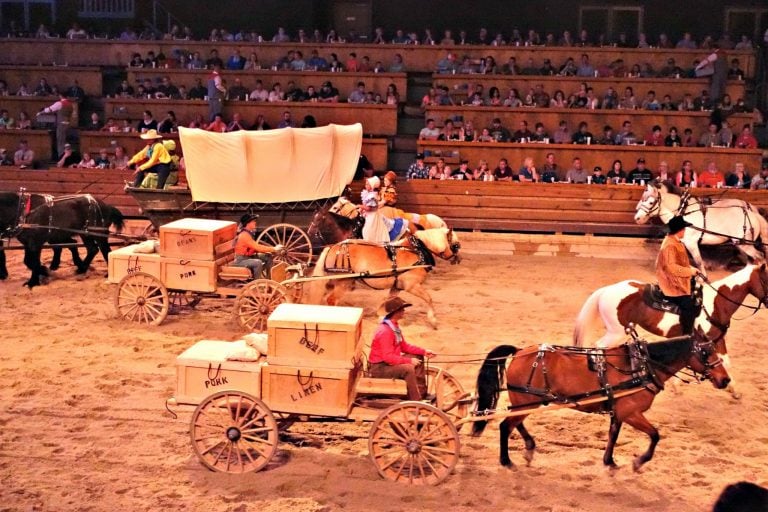 Some audience members become a part of the show.  A few children are selected to participate in a chicken race and a couple of grown-ups are selected to represent their “side” (remember, it’s North vs. South) in a friendly round of “horseshoe.” 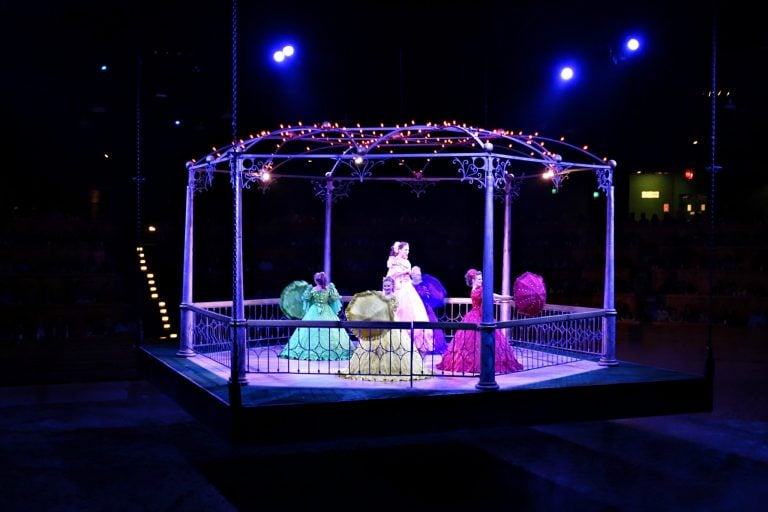 Near the end of the show, guests are served a delicious dessert.  (I would describe it as a cross between a puff pastry and an apple turnover.) 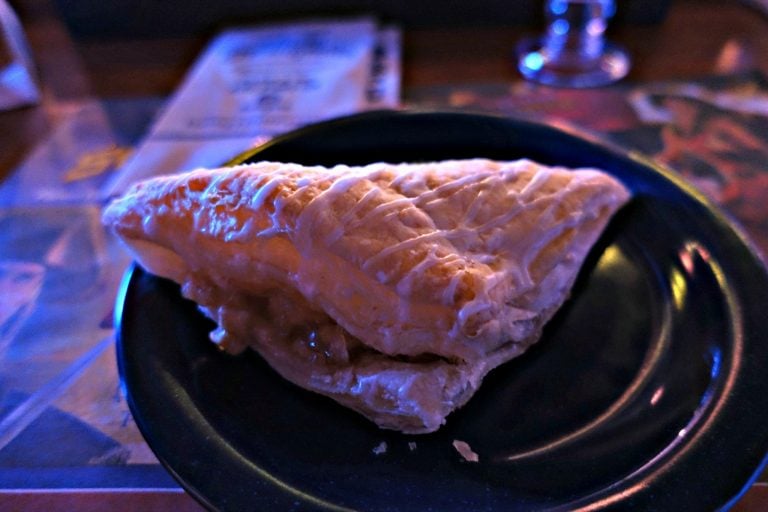 The show is concluded with a patriotic tribute in red, white, and blue. 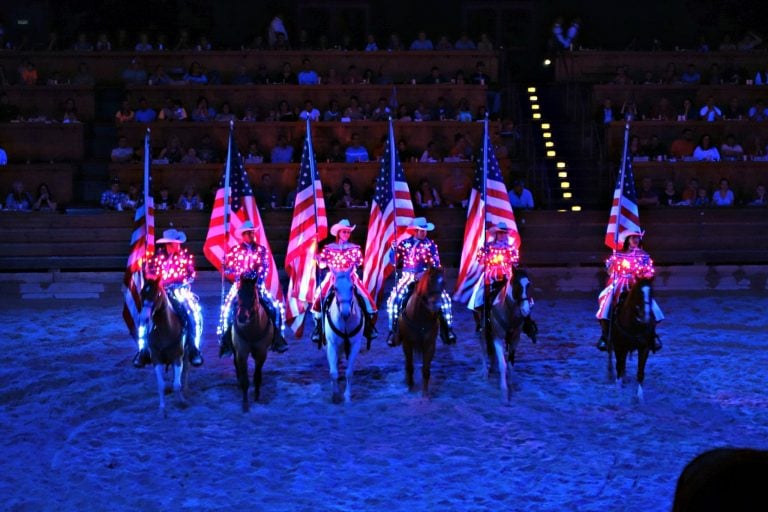 If you were to ask me to compare the Dixie Stampede to other dinner theater productions that I have attended, I would tell you that the Dolly Parton’s Stampede’s food was the best and that the show is top notch.

Click here for the Dolly Parton’s Stampede website, where you will find more information including show schedule, more info on the four-course feast (and vegetarian and gluten-free options), and ticket prices and options.

I was a guest at Dolly Parton’s Stampede and was able to check it out for myself.  All thoughts, opinions, and grammatical errors are my own. 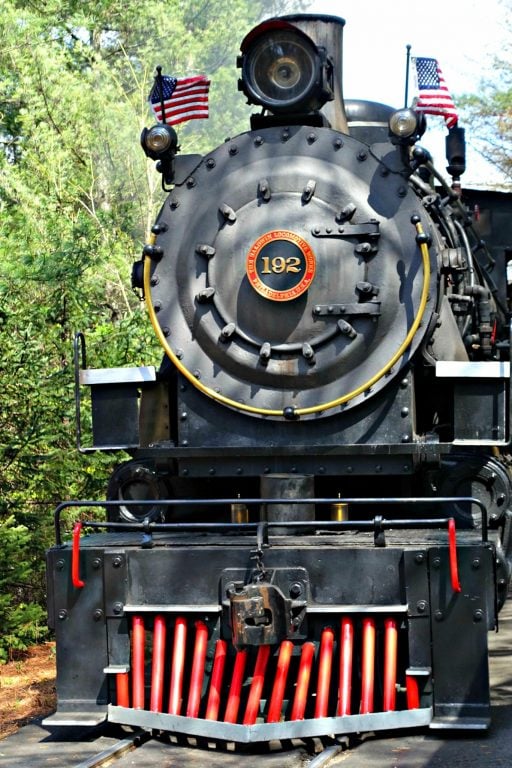 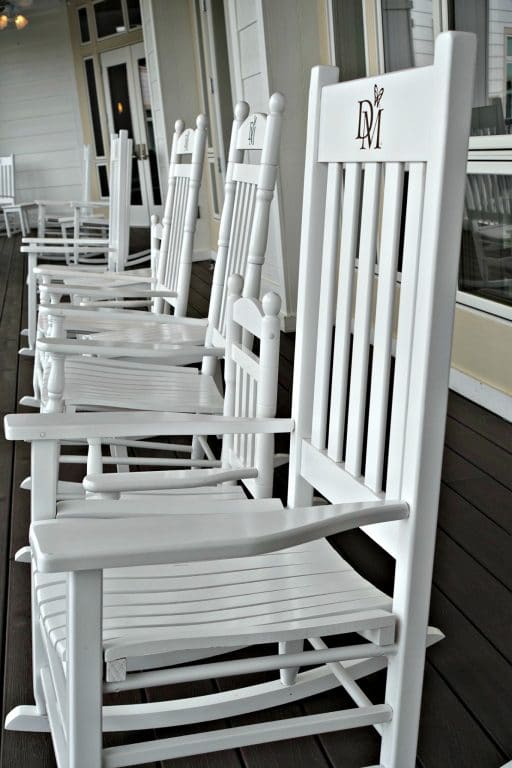 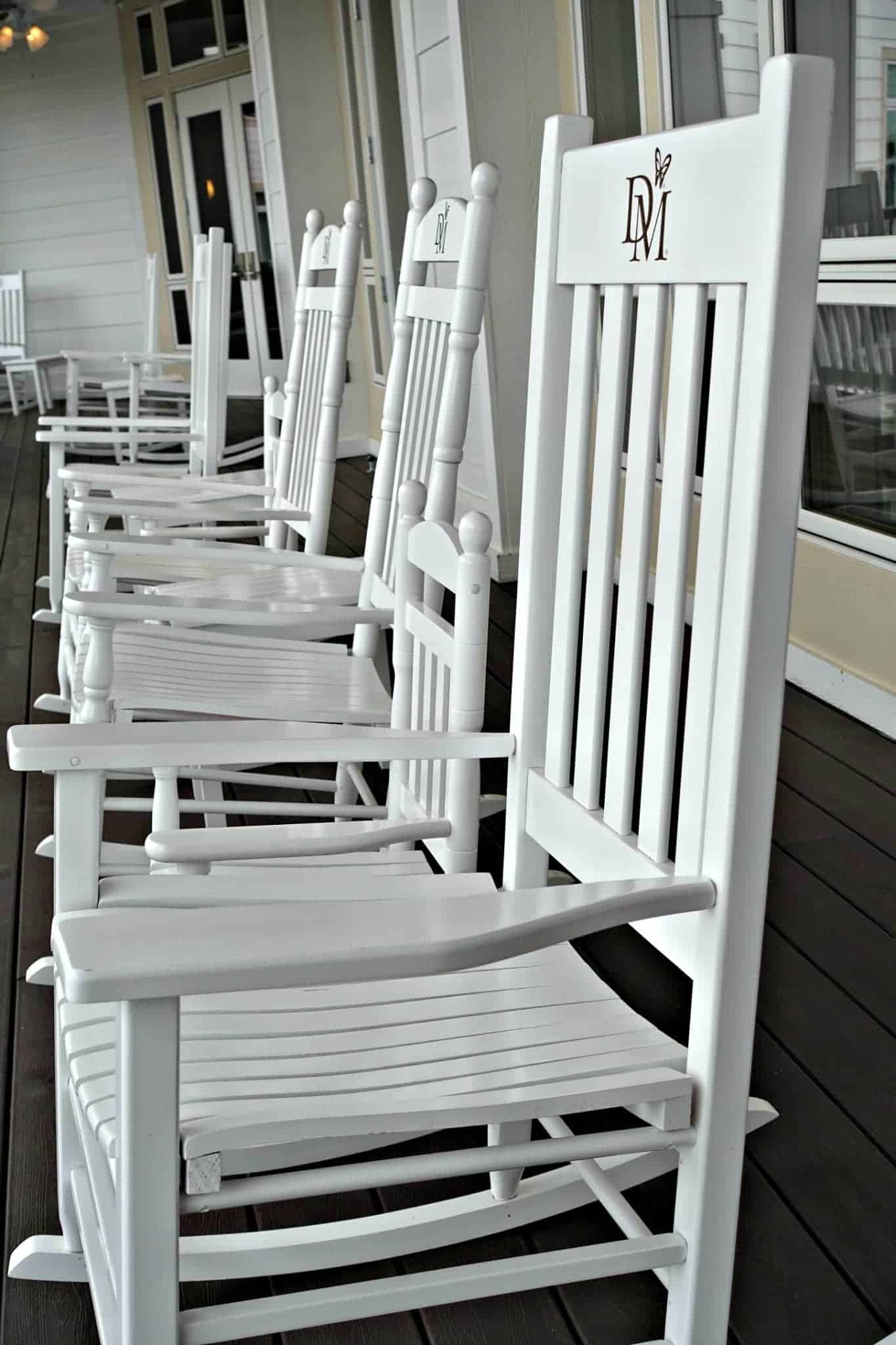 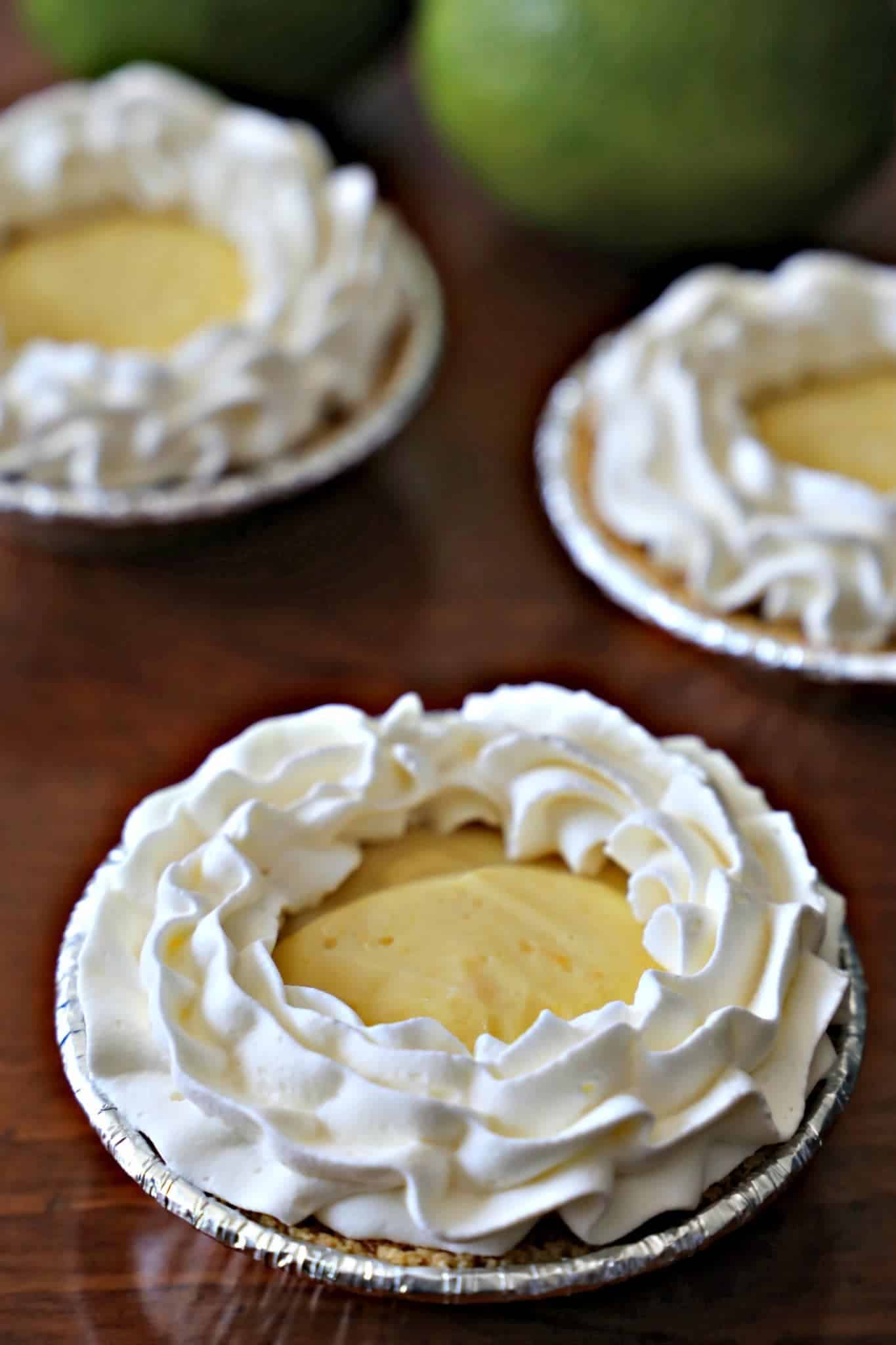 I wonder how children can be selected for the chicken catching. My grandson would never, ever forget such a fun opportunity. It will be a great Christmas treat for our family this year to be in Gatlinburg!

makes me want to go. Now.

Okay, your post about Dolly World and the Stampede convinced me to add it to my bucket list! Thank you for sharing! Have a great day! Kristi

Me and my husband went on our honeymoon in Tennessee and I can tell you , you wont ever forget it if you go ! It was so so AWESOME! I ever go back to Tennessee or Branson I will absolutely go to the Dixie Stampede again ! :)