I once pulled raw almonds and chocolate chips out of my pantry with the intention of making chocolate almond clusters. Since I had a lot to do, I just left them on my kitchen counter.

Later that evening, my husband decided that he would make some peanut butter crackers covered in almond bark. I helped him make them and we had some melted almond bark left over. He looked around the kitchen and noticed the almonds and said that he wondered what the almonds would taste like, covered in the bark.

Though I had not thought of using the white candy bark, I thought it would be worth a try. I threw some almonds in the oven and toasted them and then we coated them in the almond bark. After they cooled we tried them and they were a hit.

Today I took them a step further and sprinkled them with black sea salt. That one simple ingredient really makes a difference.

I measured two cups of almonds and placed them on my cookie sheet.

I took half of a package of almond bark and broke it in half. Then I microwaved it until the bark was smooth and creamy.

I put the hot almonds in the bark and stirred, ensuring that the almonds were coated well.

I used a spoon to scoop out the almonds and placed them in clusters on top of parchment paper.

Then I pulled out my black sea salt.

I sprinkled the sea salt on top and allowed the almond bark to firm. (It took about 30 minutes in my house. The time can vary, depending on the temperature and moisture inside.) 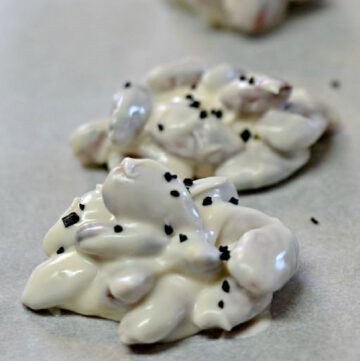 I think these would be great placed in little bags, tied with a ribbon, and given as gifts.

What is your favorite way to use almond bark?